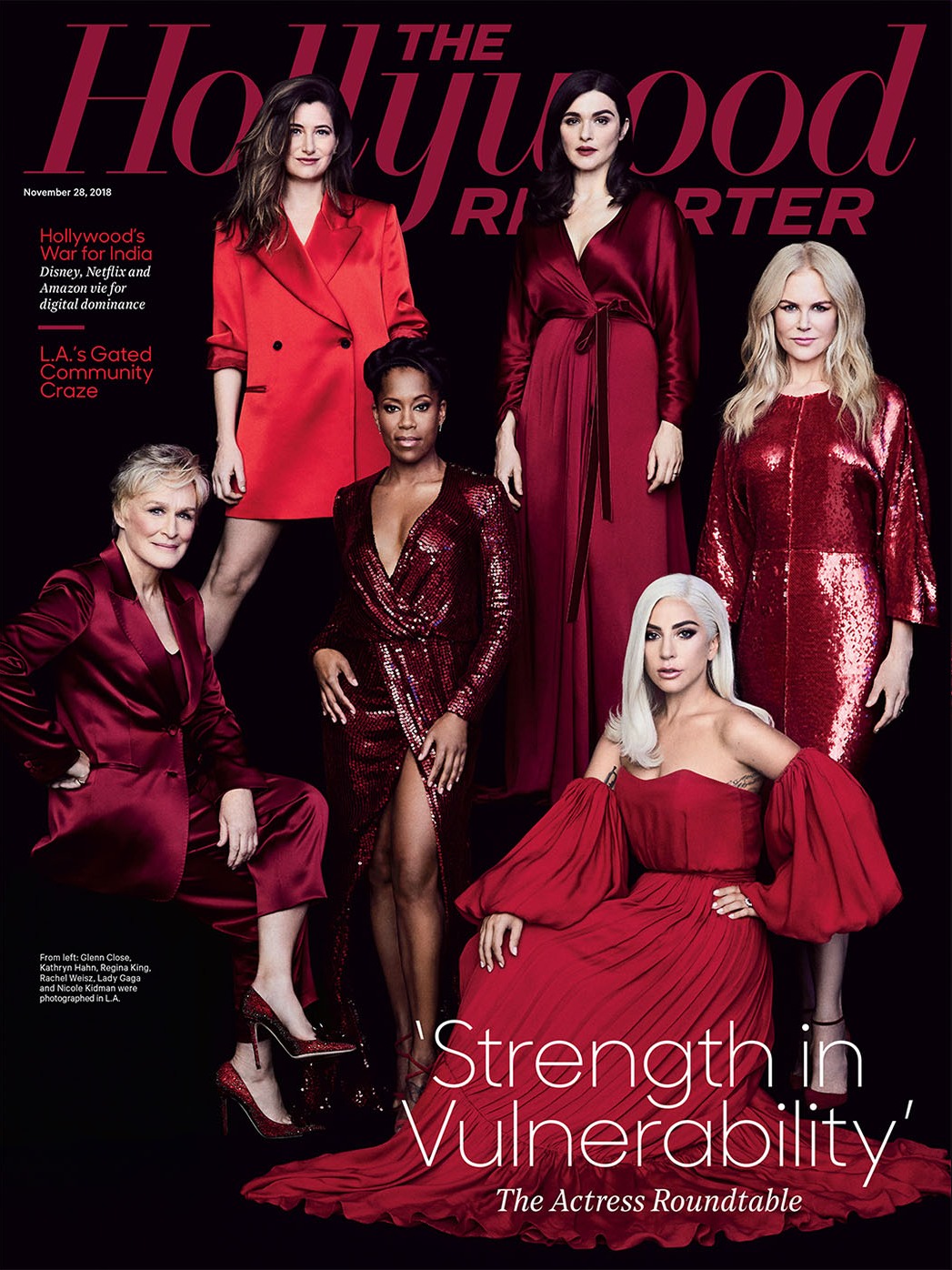 The Oscar season is upon us, and… there aren’t that many “sure things” with the acting nominations. It’s a bit weird to be this late into the year and there are only a handful of names I can say off-hand who will definitely, absolutely get some big nominations. The Hollywood Reporter’s Actress Roundtable cover reflects that too – Lady Gaga is arguably the “front runner” and “sure thing” Best Actress nominee. I would argue that Rachel Weisz is probably going to be a big contender, along with Olivia Coleman and Emma Stone, all from The Favourite. But the rest of these ladies… I suspect Glenn Close will be ignored yet again. Kathryn Hahn isn’t getting much buzz for Private Life, I don’t think. Regina King in If Beale Street Could Talk was – I thought? – a supporting role. Nicole Kidman has multiple films where she could possibly get nominated, like Destroyer and Boy Erased.

You can read the full transcript of the ladies’ roundtable discussion here. There’s too much back-and-forth conversation to really try to do big excerpts, so I’ll just highlight a few of my favorite quotes:

Lady Gaga on sexism & the music industry: “When I started in the music business when I was around 19, it was the rule, not the exception, that you would walk into a recording studio and be harassed. It was just the way that it was. So I do wish that I had spoken up sooner. I did speak up about it. I was assaulted when I was young, and I told people. And, you know, there was a “boys club.” Nobody wants to lose their power, so they don’t protect you because if they say something, it takes some of their power away. What I hope is that these conversations come together — that it’s not just about equal pay on one side … or equal billing over here … and then assault on this side. But that it all comes together and that this movement is all of those things.”

Nicole Kidman on mentoring younger women: “The sharing of information is so important. Working with younger actresses, I say, “Ask me anything and I’ll answer. Ask me anything financially. If you need advice, just ask. I can only tell you what I advise and you might take it or leave it. But it’s nice to have access to information.” It’s hard, especially if you are very young in this industry starting out, because you are trying to be good and obedient and to not be troublesome. But it’s lovely to have a bunch of people that go, “Come ask us. We’ve got some experience and we’re willing to share it.”

Rachel Weisz on strong female characters: “I think about those young actresses who feel empowered and hopefully … I have a real problem with the idea of “strong women characters.” Well, does that mean we have muscles or something? No one ever says that to a man. But [I want] young girls growing up [to] see stories being told where a woman takes a central role. Where she is not peripheral to the story. She’s driving the story, and so, you as a kid can go, “Oh, that’s me. I can identify.” So, it’s like a funny thing that [these stories] are coming together as women have been speaking up about harassment. I don’t know if it is a coincidence that suddenly you (to Kidman) could get [financing] for your film, you (to Close) could get your film made. The Favourite apparently took 20 years to make. Because there is lesbianism and three females at the center of it.”

Nicole Kidman telling young actresses: “Ask me anything and I’ll answer. Ask me anything financially. If you need advice, just ask. I can only tell you what I advise and you might take it or leave it. But it’s nice to have access to information.” That’s a great thing, and I wouldn’t have predicted that Kidman would be the one saying it, you know? While Kidman has a reputation for working well with other women, I never would have thought that we would be talking about Kidman as a passionate mentor to younger women. Sandra Bullock? I could see that. Julia Roberts? NEVER. Meryl Streep? Perhaps. And yes, I totally want to ask Nicole for financial advice now.

Nicole Kidman: "Working with younger actresses, I say, 'Ask me anything and I'll answer. Ask me anything financially. If you need advice, just ask.'" https://t.co/JXzObvsMKU pic.twitter.com/10m34lTgUU

Cover and photos courtesy of THR.