Patricia Clarkson in Georges Chakra at the Globes: striking and regal? 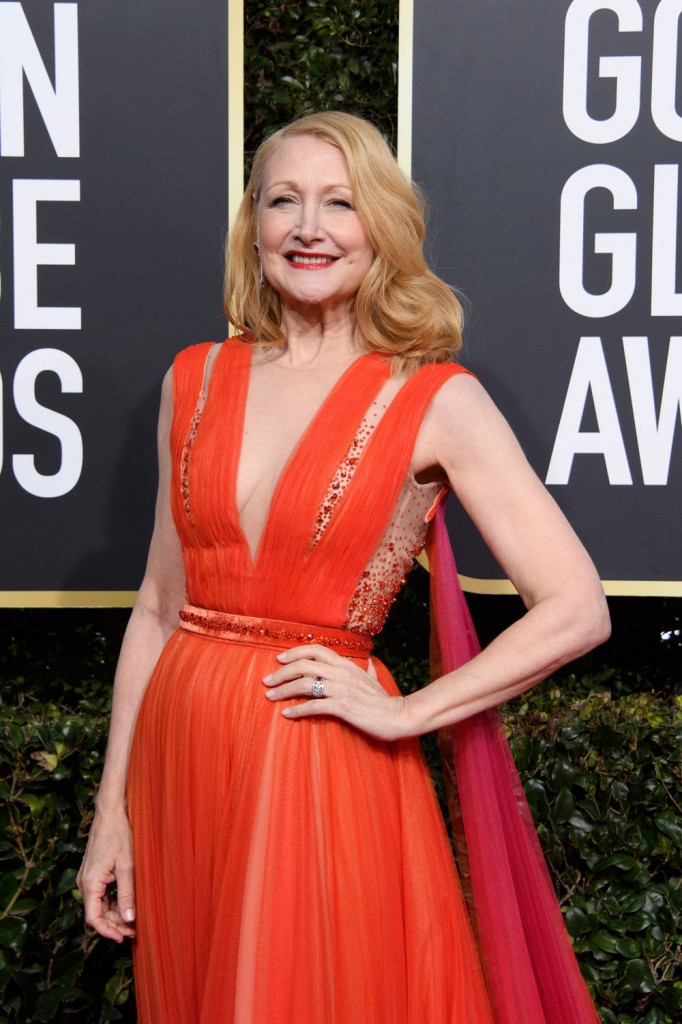 Patricia Clarkson won Supporting Actress in a Drama for Sharp Objects. That’s a show which I’ve heard many good things about, but which none of us are watching yet. (I really feel behind this awards season!) She’s getting accolades for one line during her speech, when she addressed director Jean-Marc Vallée and said “you demanded everything from me except sex, which is exactly how it should be in our industry.” That’s rather blunt, but she’s probably speaking from experience dealing with some really awful men. I can’t imagine. Amy Adams looked kind of shocked after that, but she kept smiling. You can see the speech below.

As for Patricia’s gown, she was in red-orange Georges Chakra. This dress design has been popular the last couple of years and that’s because it works. It’s very old Hollywood with some modern touches, like two trailing lines of fabric along the back in a contrasting bright pink. 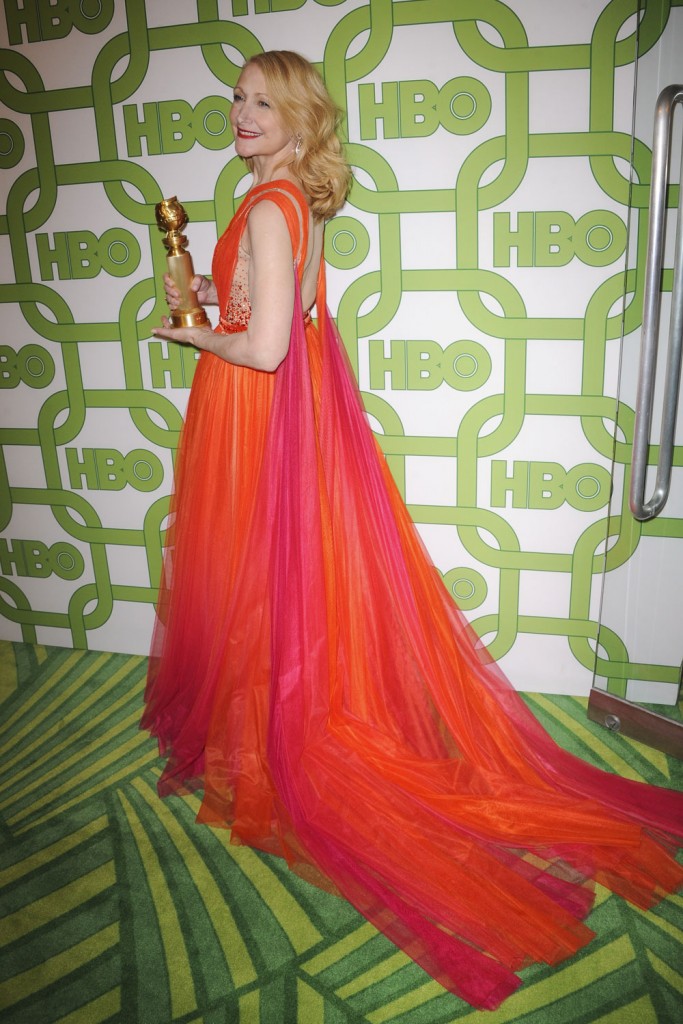 Thandie Newton was also nominated for Best Supporting Actress, for her sublime work in Westworld, the show that got super confusing. She was in a white cutout Michael Kors gown with mirror sequins. I really like this, it’s so cool that the dress picks up the surrounding colors. 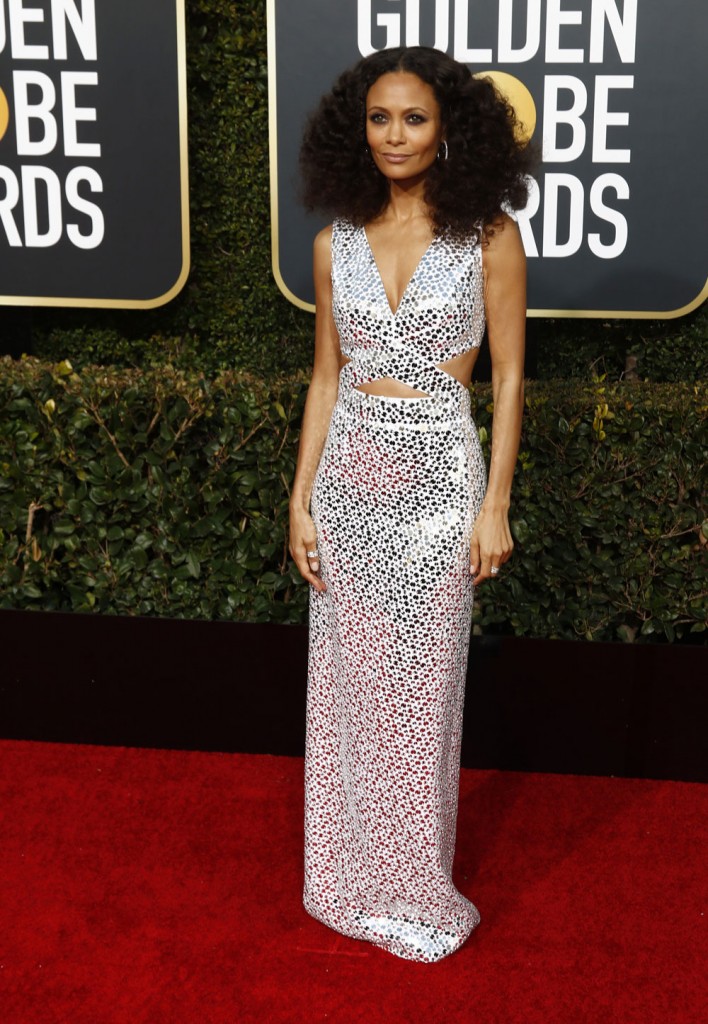 Did you know that she’s been been married to British director Ol Parker since 1998? They have three children together: daughters Ripley, 18, Nico, 14, and son Booker, just four! Thandie posted a cute photo with Ol. I just learned that Ol wrote and directed Mamma Mia! Here We Go Again. I like him so much now, that film was delightful. 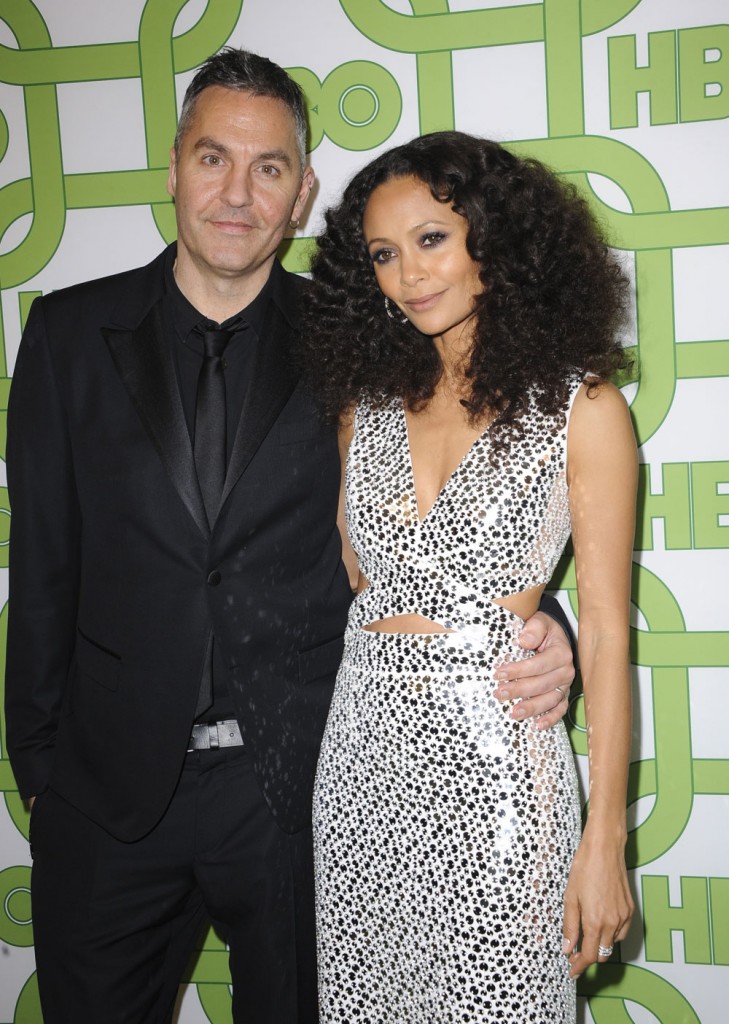 My sweet hubster taking up the slack – always so calming and kind. And plays the sickest playlists while I’m getting ready 😎 @goldenglobes @westworldhbo @hbo 💋💋

Presenter Gina Rodriguez was in Reem Acra. This dress photographs worse than it looked on camera. It has like a built-in necklace bead and sequin design that drags her cleavage down, but I didn’t notice it during the show. 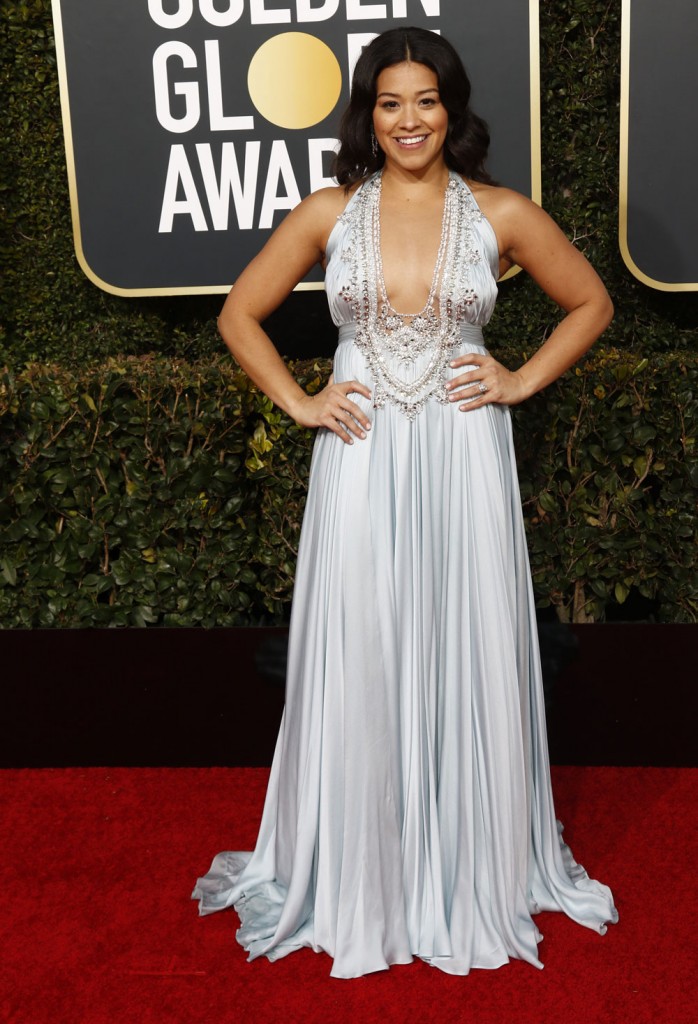 Look at how hot she is with her fiance, Joe LoCicero. They are so cute together! 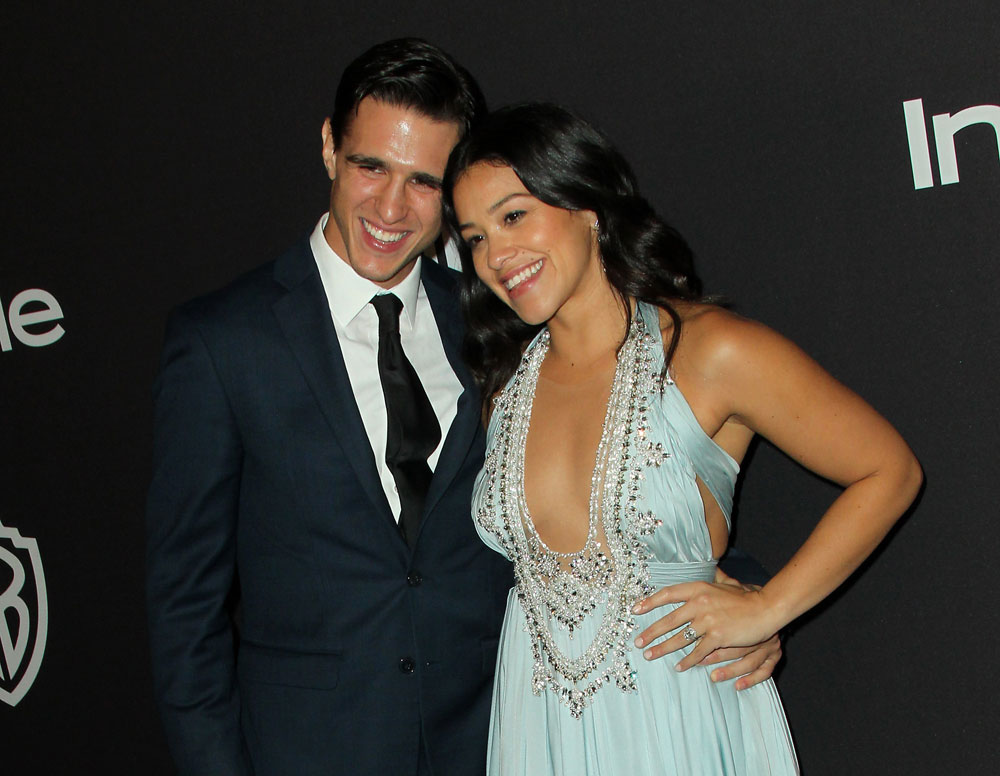 Nominee Melissa McCarthy was in Reem Acra too, in a deep purple gown with large stars along the side. I would like this if it wasn’t for the long ruffled sleeves. I feel like sleeves shouldn’t be that complicated. This is a nice holiday gown. There were a lot of looks last night which reminded me of the holidays. I wish we had more Christmas to look forward to. 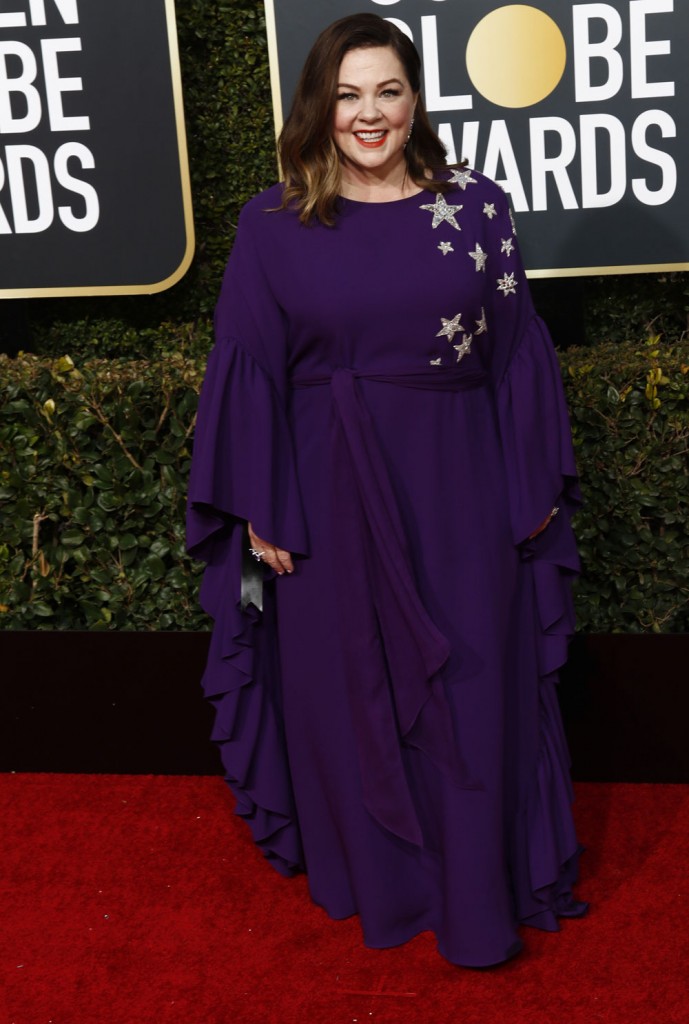 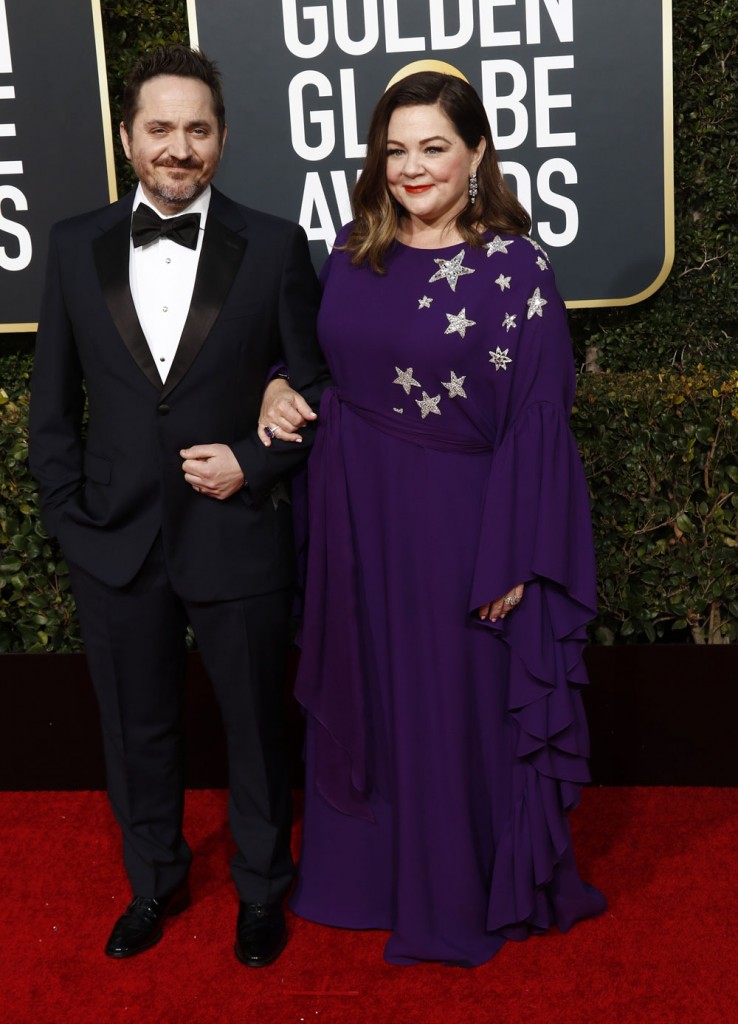 10 Responses to “Patricia Clarkson in Georges Chakra at the Globes: striking and regal?”