I’m not looking forward to The Grammys this Sunday, but we’re going to watch, tweet and cover the fashion of course. It always seems like the Grammys are shoehorned into the crowded awards season and that they should be in the fall, like the AMAs. Last year Lorde was the sole female artist nominated for Album of The Year, which went to Bruno Mars. She decided not to perform when producers told her that she couldn’t perform solo and that she’d have to join the Tom Petty tribute. She was nominated for AOTY and was told not to perform! So the Grammys have a history of this kind of shenanigans, and they just did it again to Ariana Grande. Ariana wanted to perform her new single, 7 Rings, which is number one on the charts and has broken records on Spotify. She was told she’d only get to do a medley and that they would choose the next song she would do. Ariana then decided not to even go to the Grammys, which is absolutely her right. It’s a major blow to them because they used her image on billboards for the Grammys.

Due to a disagreement with Grammy producers over which songs she would perform, Ariana Grande, who has been featured on billboards promoting the show all over Los Angeles, not only won’t be performing at the Feb. 10 show, she will not even be attending it, according to sources close to the situation.

An insider tells Variety that Grande felt “insulted” after producers initially refused to allow her to perform “7 Rings,” the latest single from her forthcoming album “Thank U, Next” (which arrives Friday, two days before the Grammys). A compromise was reached whereby “7 Rings” would be part of a medley, but Grande pulled out after producers insisted that the second song be of their choosing. The source added that such stipulations were not imposed on other performers at the show. Reps for the Grammys did not immediately respond to Variety‘s requests for comment.

With this development, the Grammys find themselves not only without a twice-nominated artist whom they have been using to promote the show, but also without one of the most vital artists of the moment.

We’ve seen that Ariana is smart about her career and that she knows how to negotiate. She shouldn’t even have to do that in this case, because it’s doubtful producers would make these demands of a male artist. This was a baller more by Ariana and maybe it will make producers think twice about how they deal with women artists.

As an aside, The Cut has an interview with Ariana’s Japanese tutor, Ayumi Furiya. Apparently Ariana has been studying Japanese for four years. Ayumi praised Ariana for how down-to-earth and great she is to work with. She explained how Ariana’s mistaken tabletop barbecue tattoo happened. It’s what we thought, Ariana left a character off because it wouldn’t fit. Then she tried to fix it by putting the symbol for finger around it, and it was still wrong. Ayumi doesn’t shade Ariana for that at all and she said it was touching that Ariana wanted to learn Japanese for her fans. She did have one hilarious line though. She said that when she first started the job she thought “Oh my gosh, I’m going to meet someone very famous and what if they’re very stupid?” That made me laugh so hard!

Ariana also just released a behind the scenes video from the making of 7 Rings. You can see that here.

This photo is from December: 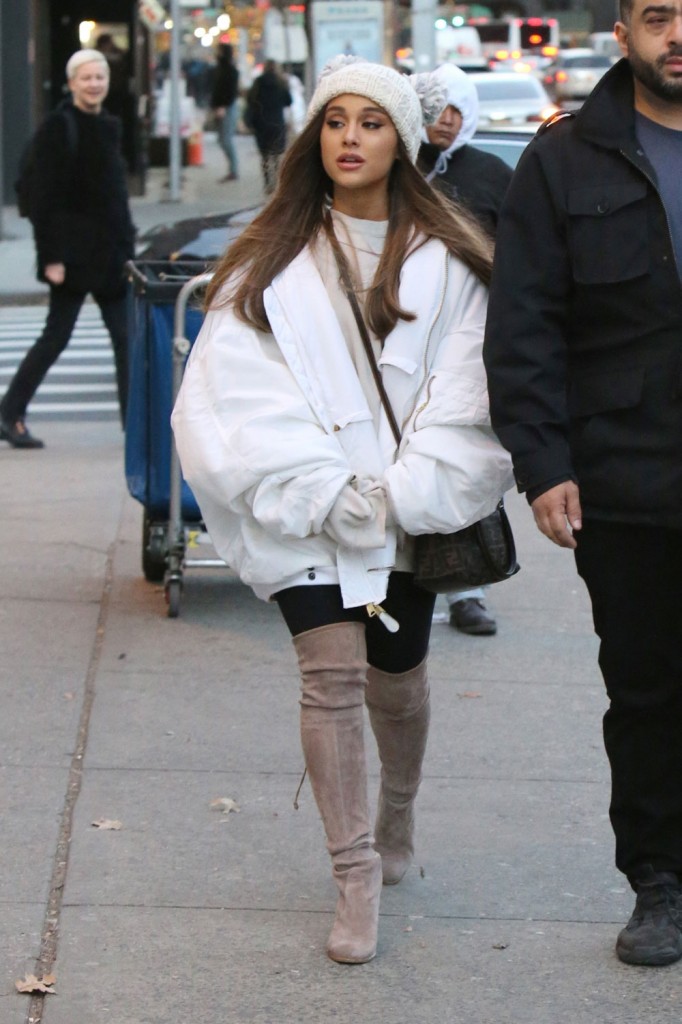