Rita Moreno on if she’ll marry again: ‘I would rather eat glass’ 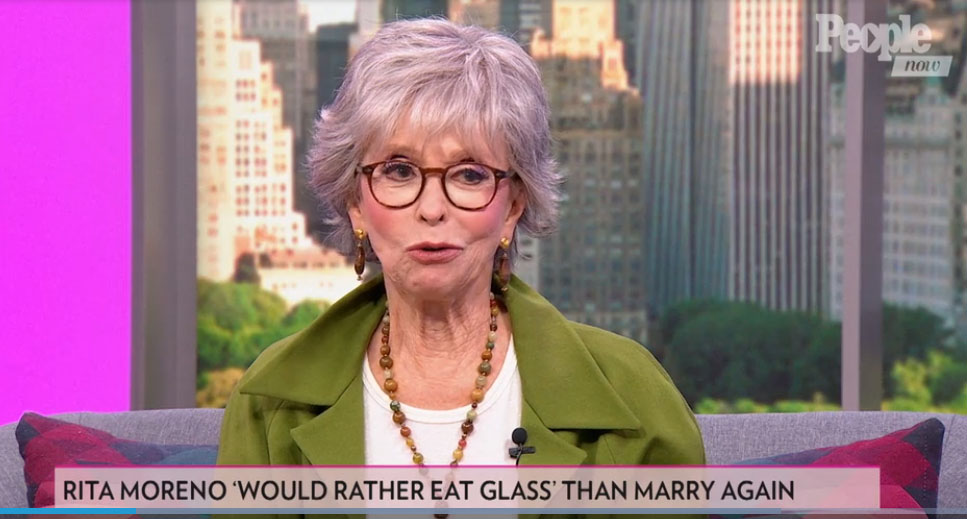 I love Rita Moreno and enjoy her interviews so much. There are several older famous women killing it and telling it like it is. Rita was a guest on People Live when she brought up the topic of marrying again. She was very clear on that point. You can see the video on People.com and here’s what she said:

Someone asked me recently if I would countenance getting married again. My answer was simple. I would rather eat glass. I don’t want to get married. I come from an era where you were supposed to obey the man in the family and they’re the ones who knew. I didn’t know how to write a check for the longest time. People who are in love very often collude. It’s a silent pact. In my case it was ‘I’ll be the little girl and you be the daddy.’ That stopped working after a while. The little girl wanted to grow up and that’s when the trouble started. I was not happily married for a very long time.

How would you describe the last eight years since your husband [passed]?
I’m so happy. I really am.

Rita, 87, was married to cardiologist Dr. Leonard Gordon from 1965 up until he passed in 2010. (Here’s a link to photos of them together.) After he died, she opened up about the fact that Leonard was possessive and jealous and that she felt trapped in the marriage. Can you imagine being miserable in a marriage your entire adult life up until the age of 79? So many people do that. My mom has friends who feel similarly, but who won’t leave their husbands because they don’t want to be alone either. They also don’t want to date again at all or go through any of that with a different man. (Which I don’t blame them for, it’s hard enough in your 40s.) I guess it’s a devil you know situation and that things are different for the older generation.

Rita with Norman Lear, the creator of the original One Day at a Time. He’s 96!
Embed from Getty Images

26 Responses to “Rita Moreno on if she’ll marry again: ‘I would rather eat glass’”