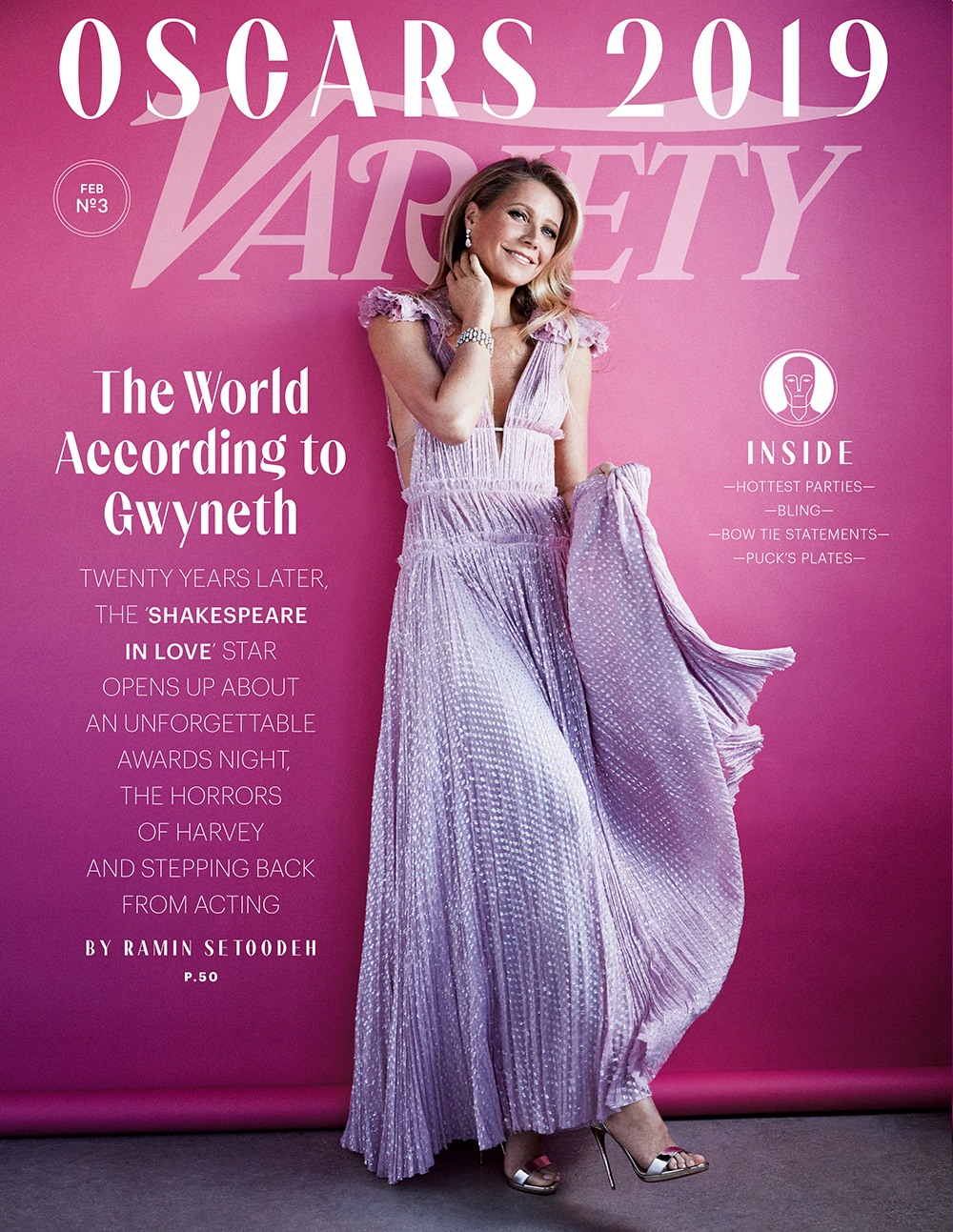 I walked into this Gwyneth Paltrow-Variety cover story thinking it was just going to be Gwyneth reminiscing about her experience at the Oscars the year she won for Shakespeare in Love. The film was released in 1998, so it’s the 20-year anniversary of when she won her Oscar. Anyway, I walked into this piece thinking it was just going to be a breezy “remember when that happened,” but it’s actually a long-read about how Shakespeare in Love came together, how Harvey Weinstein pulled a coup with the Oscar campaign, and how Gwyneth is totally over the actress life. It’s a lot! It’s a good read too, very interesting if you like insidery stories about how classic or iconic films came together. You can read the full piece here. Some highlights – there are so many good/funny/ridiculous pieces of gossip in here.

How Harvey Weinstein ran SIL’s Oscar campaign: Weinstein introduced guerrilla tactics to push “Shakespeare” past the finish line with a campaign war chest of $15 million (unheard of for Oscars races back then). He proved that with enough spending and smearing, you could go up against Hollywood’s most successful filmmaker and win. Paltrow is honest about her own struggles with the volcanic producer. “He was a bully. I never had a problem standing up to him. I wasn’t scared of him. I also felt for a period of time, I was the consumer face of Miramax, and I felt it was my duty to push back against him. We had a lot of fights.” She doesn’t believe that Weinstein’s involvement with “Shakespeare in Love” tarnishes the picture’s legacy. “It’s a beautiful film. A movie is not going to be successful if it’s not a good movie, not like that.”

Brad Falchuk referenced SIL at their wedding. “I hope this isn’t too personal. But in my husband’s wedding vows, he actually said it’s no coincidence that I played this muse, because that’s who I am to him, and his perception is that’s who I am in real life. It was really sweet.”

She’s retiring Pepper Potts after Avengers: Endgame: “I mean, I’m a bit old to be in a suit and all that at this point. I feel very lucky that I did it, because I actually got talked into it. I was friends with [‘Iron Man’ director] Jon Favreau. It was such a wonderful experience making the first ‘Iron Man’ and then to watch how important it has become to the fans.”

She’s fine with a superhero movie winning Oscars: “So if the vernacular in film is superhero movies and they’re great movies, then I guess why not, right? I loved ‘Black Panther.’ I thought it was a really powerful movie and culturally very important. So that’s great that it was nominated. I mean that’s so cool.”

She has seen very few of this year’s Oscar contenders: Of all the best picture nominees, the only other ones she’s seen are “A Star Is Born” and “Bohemian Rhapsody,” both with her two kids (from her first marriage to Chris Martin). She admits that she still needs to catch “Roma” in a theater. “Oh, my gosh,” she says. “That seems like a commitment. What else is really good?” There’s “The Favourite,” of course. “What’s that?” she asks.

She turned down the Shakespeare in Love script initially: “I was in the middle of a terrible breakup” — with Brad Pitt — “and the idea of going to England and being far from home just seemed …I didn’t even read it. I was just like, ‘I can’t read anything right now. I’m having a really hard time.’”

When she won the Oscar: “Jack Nicholson gave it to me. There’s a funny story where he’d been trying to ask me out before, and I was like, ‘I have a boyfriend!’” It wasn’t awkward that she’d turned him down. When she forgot to take the envelope from him, he sent it to her with a tender note. “I have it framed.”

So much shady sh-t, humble-bragging and Classic Goopiness, you don’t even know. I edited like half of all that sh-t out, like when she took credit for making sure Joseph Fiennes was cast (he was still in the dark about that when he spoke to Variety). But there’s so much – Jack Nicholson asking her out, being too devastated about Brad Pitt to read one script, not knowing about The Favourite, it’s all so… Gwyneth. Also: one of the biggest pieces of Hollywood lore – possibly apocryphal lore – is that Gwyneth stole the SIL script from Winona Ryder and that’s what ended their friendship. That’s not addressed here at all. Gwyneth makes it sound like she was only the second choice after Julia Roberts backed out. Hmm…

Also: Brad Falchuk called her his muse in their wedding vows, OMFG. Reader, I laughed.

Gwyneth Paltrow originally turned down "Shakespeare in Love." "I didn't even read it" she says. In fact, other actors were set to star in the #AcademyAwards winning film, like Julia Roberts. Ben Affleck was set to play a different role. Link in bio for more secrets from the #ShakespeareInLove set. (📷: @jameswhitefoto)

Cover and photo courtesy of Variety.