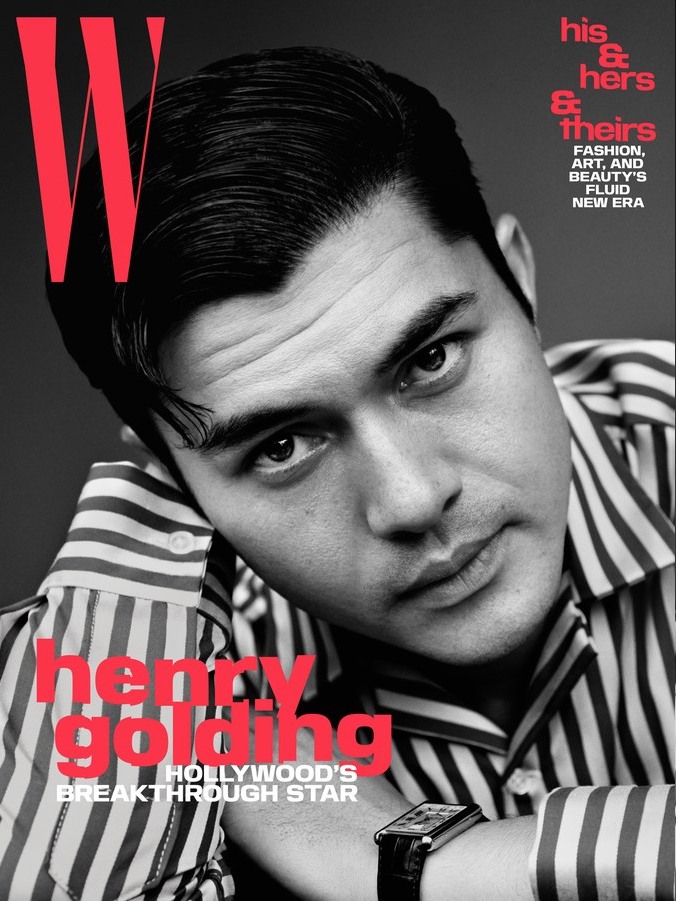 Henry Golding covers the latest issue of W Magazine, because why not? He doesn’t seem to have a film coming out in the immediate future – his next film is Last Christmas, which comes out in November. Basically, this is a hype piece and a check-in piece. Checking in on how he’s coping now that he’s a famous movie star right out of the gate because of Crazy Rich Asians. The premium channels have been playing CRA constantly lately and I keep watching it every time it’s on. Henry is SO good as the guy who is basically Prince Charming. It helps that he’s just naturally a charming, interesting person too. He talks about his other careers (TV presenter, hairdresser) before turning to acting, and how the success of CRA changed his life. Some highlights:

His career changes: “It has been a trial by fire. My comfort comes from the fact that I’ve had a lot of other career. I’ve lived a lot of my life through gut feeling—seeing the tea leaves, if you know what I mean.”

He feels comfortable as an actor: “That was where I think I found my footing. Up to that point, I’d been a yes guy, but on Monsoon there was a point where I was like, Wait, I deserve to have a mind of my own.”

Working with Matthew McConaughey on Guy Richie’s The Gentlemen. “What am I doing? This is so random!” he recalled spending the first day thinking in a continuous loop. He was particularly excited to work with McConaughey; given the actor’s reputation as a notoriously fun dude, Golding, a fun dude himself, imagined the two of them hitting it off, bro-ing down a bit between takes. “Didn’t quite happen like that,” Golding said with a laugh. “Matthew is intense. It was the first time I had come across a real method actor. He never broke character! So we didn’t get along on set all too well because our characters are foes. Going into a film thinking you’re going to be best friends with Matthew McConaughey and then getting very different results—well, you can’t be disappointed. You have to go with it.”

He still does hair: “My skills are now down to helping my wife blow out her hair every once in a while and cutting babies’ mops.”

Wanting more color-blind roles & color-blind casting: “There’s more of that happening, where parts are not written specifically for an Asian actor. Like in Last Christmas, my character is just Tom, not ‘Asian Tom.’ That’s a big step. I definitely hold that responsibility in high regard, in the sense that I’m leaving an impression, maybe opening some doors for whoever comes next. I want to conduct myself in the way a leading man should conduct himself.”

Can you even imagine being married to handsome, charming straight man who does your hair? I WOULD DIE. His wife is soooo lucky. Also, the McConaughey stuff is really interesting, right? Reading between the lines, I would say that Matthew was probably sort of a douche to Henry and Henry just behaved professionally. Maybe I’m reading that they wrong way.

Here’s his W Magazine video – he’s absolutely adorable talking about Mariah Carey! He’s adorable about his wife and being a hairdresser.

"I’m leaving an impression, maybe opening some doors for whoever comes next. I want to conduct myself in the way a leading man should conduct himself.” —@henrygolding – Photography: @alasdairmclellan Styling: @saramoonves W magazine, Vol. III 2019