Cast of Wine Country: It’s unrealistic how people drink in movies without getting drunk 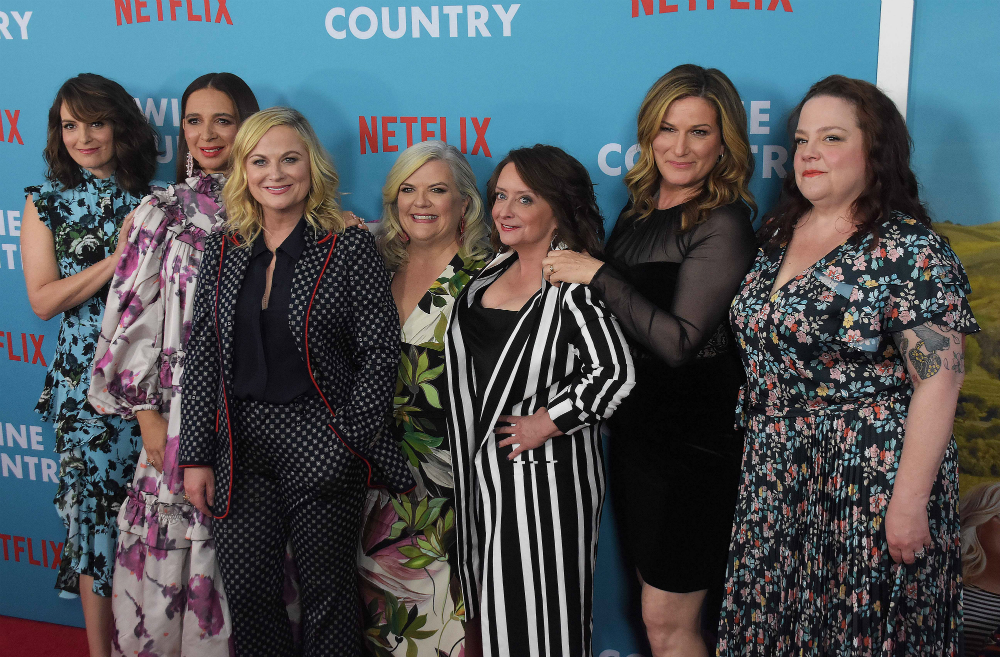 I watched Wine Country earlier this week and loved it. That’s not terribly shocking, I love the cast and abuddy girl comedy set in wine country is right up my alley. But my husband loved it too because of the writing. Most of the character development is delivered in well-crafted dialogue. The movie’s plot is a love letter to the evolution of friendship. It has a lot of soul to it. It’s also truly funny without becoming boffo. Most of the main cast, Amy Poehler, Ana Gasteyer, Maya Rudolph, Paula Pell and Tina Fey, appeared on Busy Tonight Monday and it was an absolute treat. The clips below have a few mild spoilers but the parts I’ve transcribed don’t. The biggest reveal is that the cast didn’t drink much wine on set but had some keep track of how drunk they should be to make it more real.

Congratulations on the new movie, Wine Country. I related to it so much and just I feel like everyone needs to know: were you guys drinking real wine?

Amy: Very rarely. I feel like of a lot of this stuff happened in the midday and we would have been a little too sleepy. Alice Stanley, who works on your show, she kept track of the amount of glasses of wine each character had drunk in every scene. If you remember, a couple times, she had a little chart, she’d be like, ‘Just remember Maya, that your character has had four glasses’

But can I tell you something, that is genius. Because just recently, my husband and I were watching the film where the characters legitimately took literally 14 shots and in the next scene were like, (soberly) Alright, so here’s the thing…’

Tina: And then you watch Mad Men and think, ‘No, y’all would be dead.’

Amy, This is your directorial debut. What was it like directing some of your closest friends, was that an easy job for you?

Amy: It was. I think a lot of directors like to talk about how difficult things are and therefore what they make is so worthy. But this is really easy.

The hardest part was just getting us to just stop talking and start working.

Tina: It was so great to have a director who knows when that’s enough improv. Because a lot of directors bring you in and they want you to fix the script with improv. Emily Spivey and Liz Cackowski were hilarious too.

I cannot emphasize enough how delightful this interview was. What I like about it is what I like about Wine Country – it’s humorous and warm and yet, they actually say something beyond the funny-drunk-emotional women tropes. Charting the amount of wine consumption so the actor can more accurately portray their character is smart. It made the characters more relatable and allowed me to connect better with them. And Tina’s comments are huge. Directors do rely on talented comedians to save scenes with improvising. But so often, those scenes get ruined because they’ve relied too heavily on it. I added the bit about Tina calling out to Liz Cackowski (who is in Busy’s audience) because she truly is fantastic in her five minutes on screen. I love that these women put their faith in Amy and came out the other side even closer. I want to watch the film again after seeing this because I feel like watching their camaraderie off screen will make it even more enjoyable.

There is a lot more to their interview. Many of the bits in Wine Country were taken from various friend trips the cast have taken over the years and they explain the origin stories to Busy (again, mild spoilers). One of the funniest stories involves Paula and vibrators but I’ll let you watch that one your own. Another story is about Amy’s character’s CPAP machine. Apparently, Amy is such an advocate of CPAP machines that she not only wrote it in for her character, she used her actual machine in the film. The best part is while describing it, she likened it to Bradley Cooper casting his own dog in A Star Is Born.

I know I sound like a broken record, but I really want Busy Tonight to continue. She fosters an environment in which these kinds of interviews allow people to show their best selves. Wine Country is currently streaming n Netflix.

Amy’s comments about her CPAP machine and another funny quote from Maya about answering reporters with “suck my d**k” are int this segment. Plus they all harmonize to Busy’s closing song – it’s great:

53 Responses to “Cast of Wine Country: It’s unrealistic how people drink in movies without getting drunk”