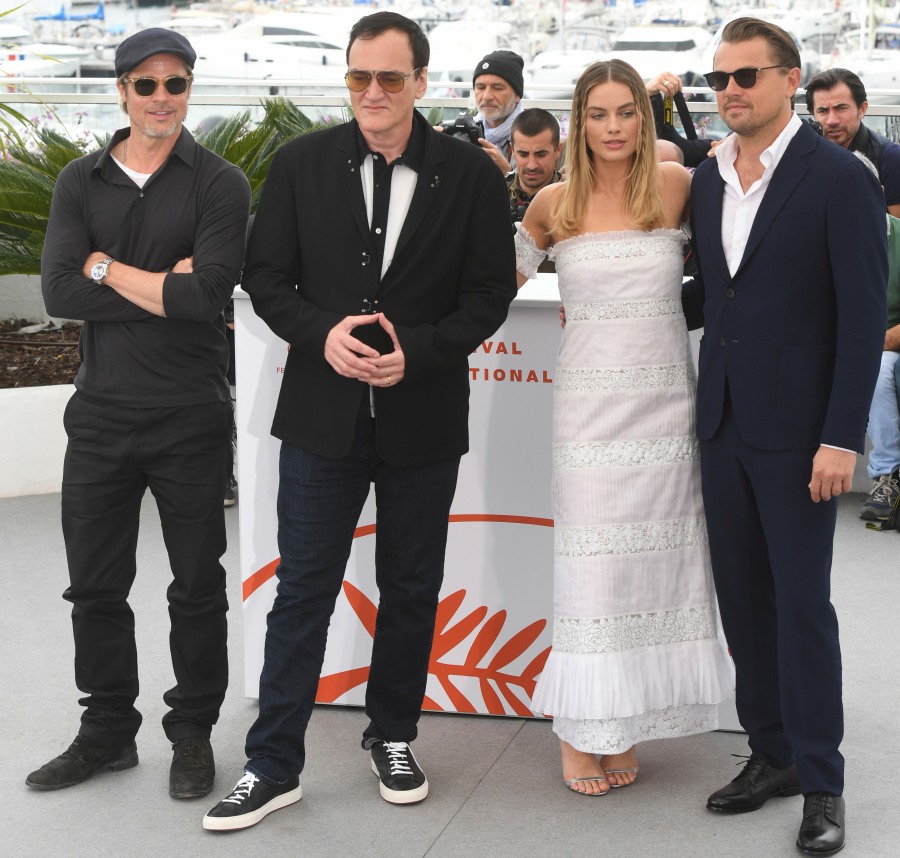 Here are some pics from Wednesday’s Cannes Film Festival photocall for Once Upon a Time in Hollywood. Everybody looked happy to be there, especially… Brad Pitt? “Sources” told People Magazine that Brad “was very happy to be there. [He was] absolutely relaxed and smiling like I haven’t seen him for some time.” How long will have to sing this song, this “Brad was so depressed after he caused the end of his marriage and smeared his estranged wife” song? Over the past two years, sources always claim that Brad is super “happy” NOW, unlike the last year of his marriage, I guess.

Anyway, the reviews from Cannes are coming out and it looks like most critics like it. The biggest criticism I’ve seen is that Margot Robbie – who plays Sharon Tate – doesn’t seem to do or say much in the film. At the press conference after Wednesday’s photocall, Quentin Tarantino seemed to take issue with a journalist bringing that up:

Quentin Tarantino snapped at a female reporter from The New York Times who asked why Margot Robbie wasn’t given more to say or do in his latest film “Once Upon a Time in Hollywood.”

“I reject your hypothesis,” he said at a press conference for his new film on Wednesday morning at the Cannes Film Festival. At the press conference, Tarantino scowled — looking visibly upset — at the question as Robbie tried to tactfully answer it.

“I think the moments I was on screen gave a moment to honor Sharon,” Robbie said. “I think the tragedy was the loss of innocence. To show the wonderful sides of her could be done without speaking. I did feel like I got a lot of time to explore the character without dialogue, which is an interesting thing. Rarely do I get an opportunity to spend so much time on my own as a character.”

Sony Pictures’ “Once Upon a Time in Hollywood” premiered at Cannes to strong reviews on Tuesday night. This terse exchange came at the end of 30-minute press conference where Tarantino and his cast fielded mostly congratulatory questions, which didn’t address Harvey Weinstein (who frequently worked with Tarantino) or Uma Thurman (who gave an interview last year to the New York Times detailing the alleged abusive behavior she had to endure at the hands of Tarantino on the set of “Kill Bill”).

The fact that NO ONE in the room asked one single question about Harvey Weinstein or Uma Thurman speaks volumes. To be clear, Uma has said that she’s pretty okay with QT after everything that happened on Kill Bill, and to be clear, Tarantino has also come clean about how he should have done something or said something or protected women more. But yeah, Margot largely playing a wordless Sharon Tate? Doesn’t sound great.

Tarantino was asked about Roman Polanski – who was married to Tate, and is portrayed in the film – and he didn’t say one word about the fact of Polanski’s admission of rape, or of the multiple women who have come out to say that Polanski assaulted them or was inappropriate with them when they were little girls.

Quentin Tarantino on his relationship to Roman Polanski, who's featured in #OnceUponaTimeinHollywood alongside Margot Robbie's Sharon Tate #Cannes2019 https://t.co/9TD1XcPcpB pic.twitter.com/kEoukglNHX 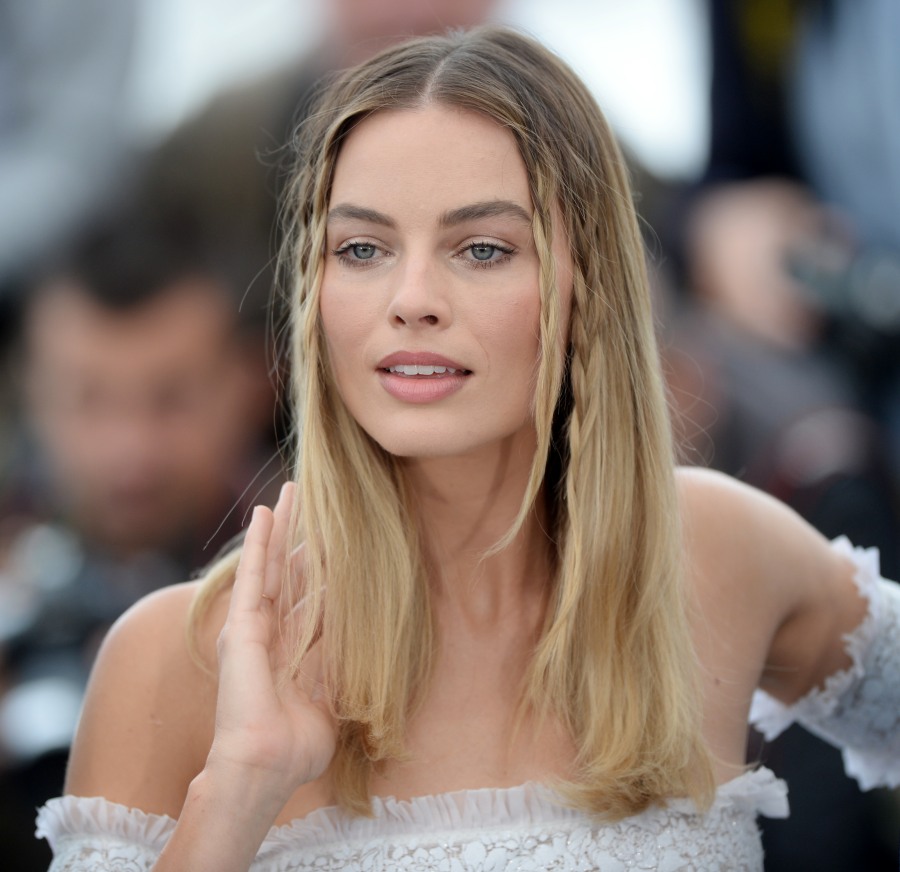 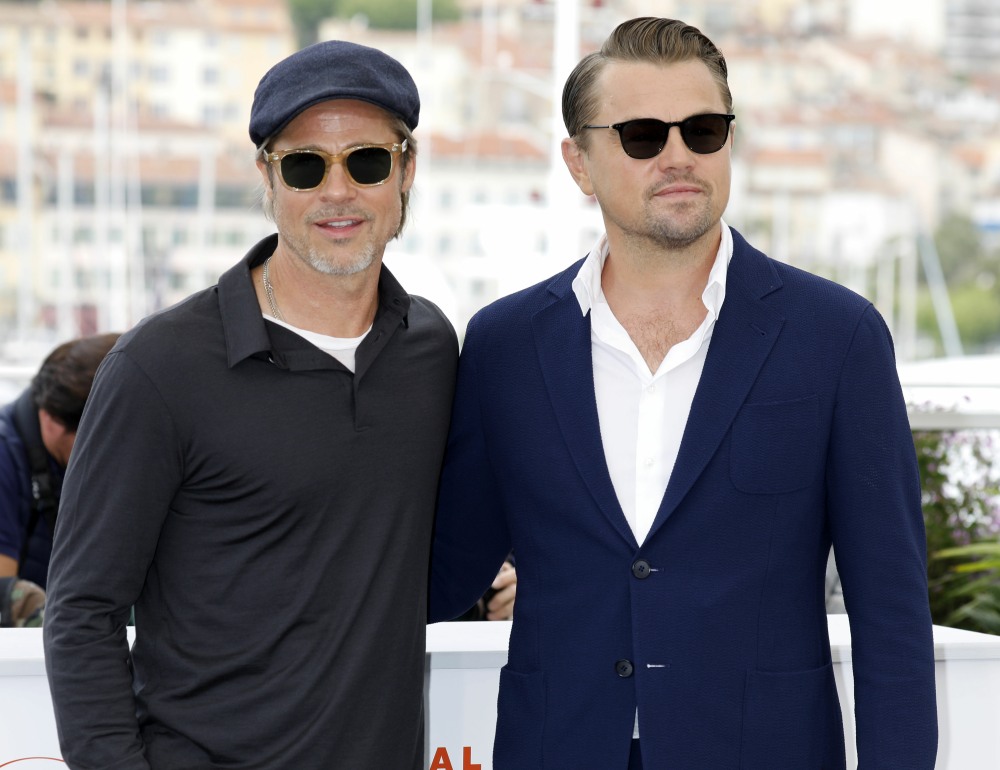 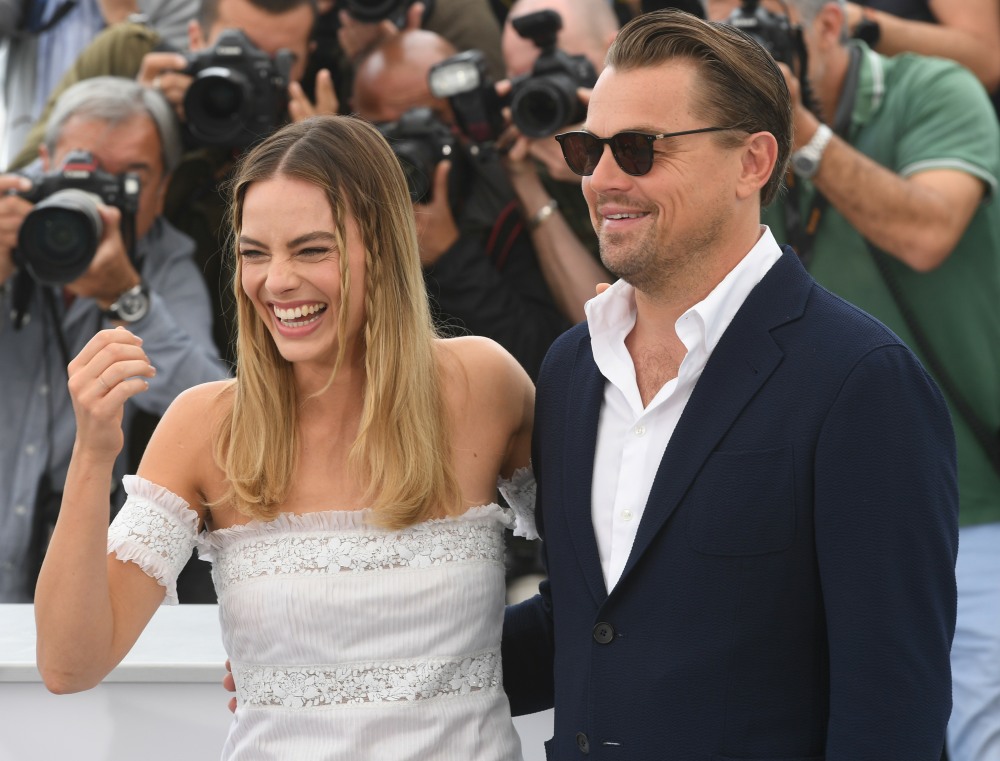