Chris Hemsworth: After Avengers & Thor: The Dark World, ‘I did feel a bit trapped’ 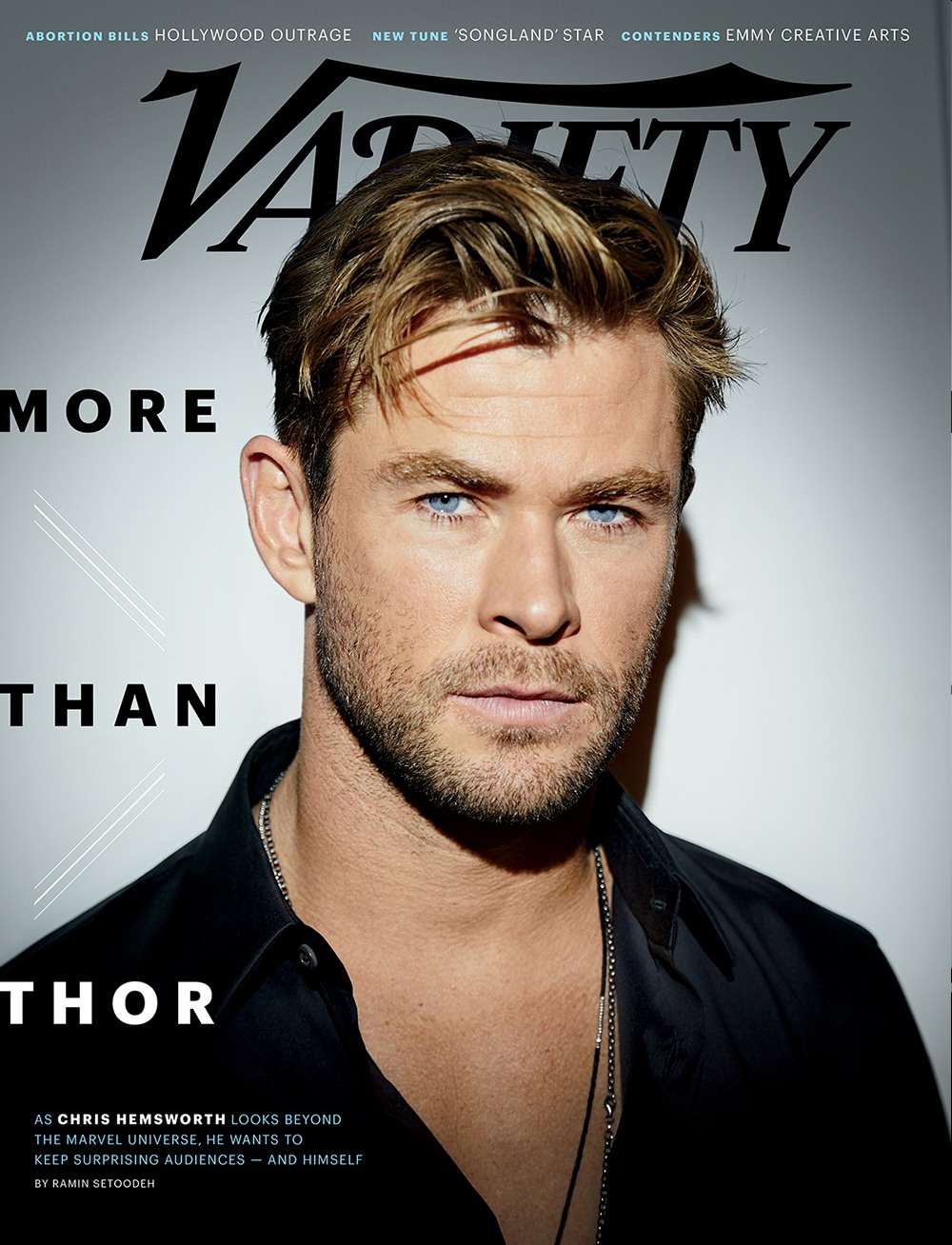 This is a great headshot of Chris Hemsworth, right? They made his eyes pop and the black shirt looks amazing on him. Chris covers the latest issue of Variety to promote Men in Black: International, where he and Tessa Thompson take the MIB reins from Will Smith and Tommy Lee Jones. This is sort of a reboot of the popular franchise, but they’re not starting from scratch, I believe. Anyway, Variety leans heavily into the narrative that if MIB is successful, Hemsworth will be the biggest action star in the world or something. You can read the full profile here. Some highlights:

He bought tickets for Avengers: Endgame: “My kids were dying to see it. I wasn’t going to take them. They were like, ‘Dad, we have to go!’ We found a small cinema so we wouldn’t get overwhelmed. I wondered if it would hold their attention for three hours. They loved it.”

Why he does such big, popcorn movies: “I asked Tom Cruise years ago what drove him to make certain decisions on films. He said, ‘I just want people to see my movies. I don’t want to put that much blood, sweat and tears into it, and have it come and go.’ I just love the theatrical experience. I think there’s nothing quite like it, and the industry will change in a big way if we don’t get people to the cinema.”

On the idea of replacing Daniel Craig as James Bond: “My vote would be Idris [Elba]. I think he’d give it a different sort of swagger, too, and each time someone new comes into the role, I think you’ve got to offer up something different.”

Doing the ‘Lebowski Thor’ thing in Endgame: “I like that anything goes. You’re not locked into expectations.” Originally, Thor was supposed to revert to his old self in the middle of “Endgame,” but Hemsworth fought to keep his pear-shaped body. “I enjoyed that version of Thor. It was so different than any other way I played the character. And then it took on a life of its own. Physically, it was a good three hours in hair and makeup. Then the prosthetic suit, particularly for the shirt-off scene, that was a big silicone that weighed about 90 pounds. It was certainly exhausting… People just kept coming up and cuddling me like a big bear or rubbing my belly like I was pregnant…Or trying to sit on my lap like I was Santa Claus. You get a lot of affection. I felt like an old man, an old grandpa, with a bunch of kids around.”

He didn’t enjoy 2015’s Blackhat: “I didn’t enjoy what I did in the film. It just felt flat, and it was also an attempt to do what I thought people might have wanted to see. But I don’t think I’m good in that space.”

He pushed for Thor to be lighter & looser after the first two films: “After I’d done ‘Avengers’ and ‘Thor 2,’ I did feel a bit trapped. I felt like I was typecast by whoever was writing those scripts. I feel like the creators were stuck on where they could take the character, and was this all he had to offer? I felt there was so much more we could do.”

He wants to do more Thor films: “I’d still love to do more, to be honest. And I don’t know what the plan is. I feel like we’ve opened up such a different character. I feel more energized for the possibility of where it could go. But I’ll use that in other places and other characters if it’s the end here.”

I feel like the past five years or so has been Chris coming to terms with his “place” in the Hollywood system. He’s not the guy who will do dark dramas. He’s probably not the guy who gets offered Oscar-bait. He’s the guy who makes crowd-pleasing action-adventure movies, like Tom Cruise used to. I get that. And we need those actors too. I also feel retrospectively justified with how frequently I pointed out Chris’s unhappiness with Marvel during those mid-point years. Thor: The Dark World was a slog for him and he barely promoted it. He perked up for Thor: Ragnarok though. 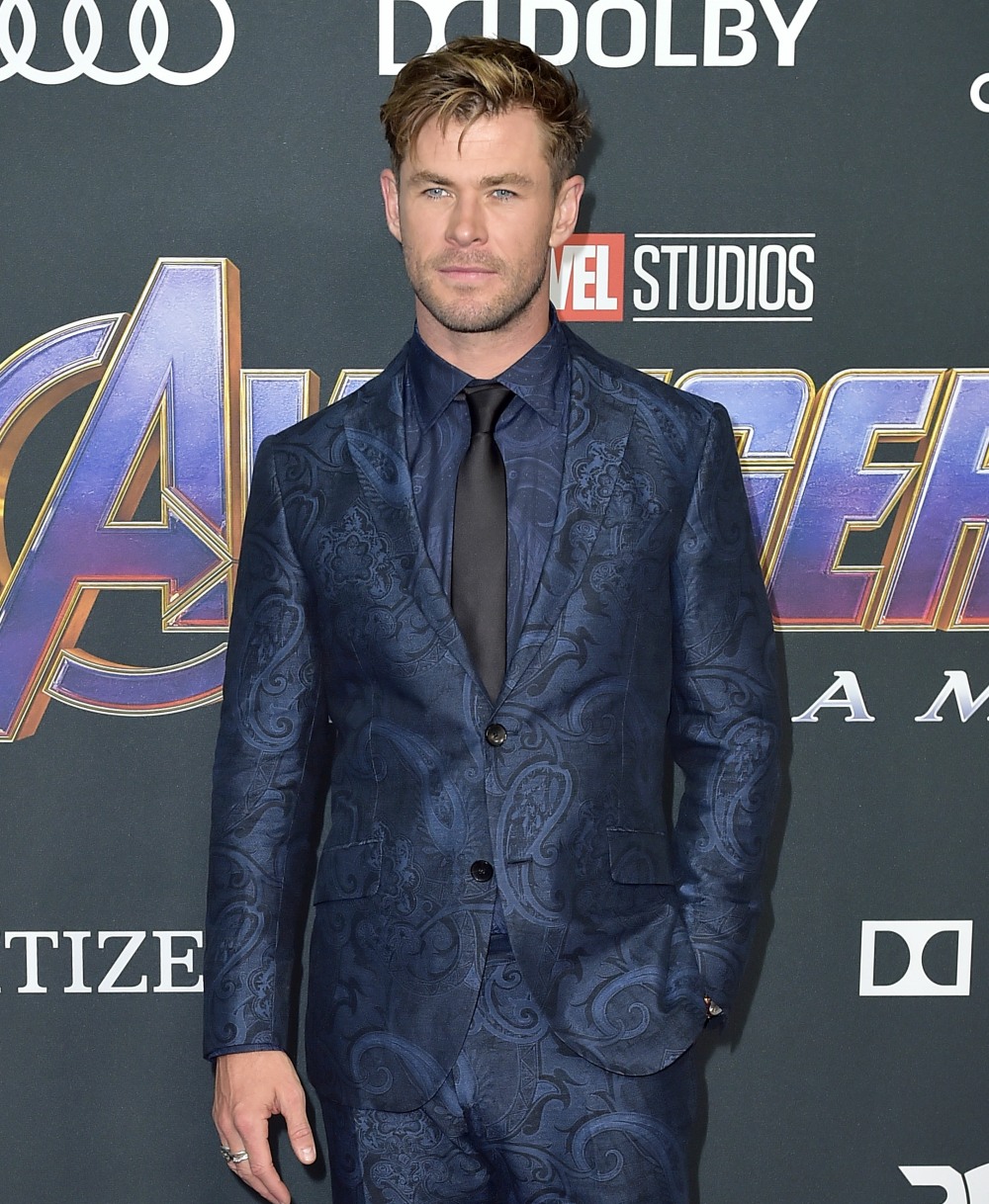 37 Responses to “Chris Hemsworth: After Avengers & Thor: The Dark World, ‘I did feel a bit trapped’”