Ariana Grande announced earlier this week that she was unable to make two tour dates, in Tampa and Orlando on Tuesday and Wednesday, due to an illness. I thought it might be allergies or a cold, something that would affect her voice. It turns out she had an allergy to tomatoes that just developed suddenly! She posted the news in an Instagram story and then issued an update explaining that doctors discovered she was allergic to tomatoes. She is still scheduled to perform in Miami tonight, Friday, and tomorrow night. Here’s her apology about missing concerts: 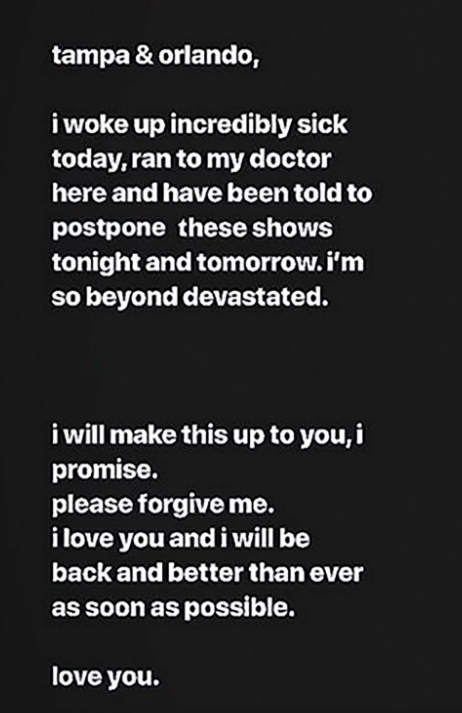 Then she posted this video of her dog on some stairs (it doesn’t do much except move his head and there’s just ambient sound) along with the news that she has a tomato allergy. I’m posting the text separately so everyone can read it.

update: we discovered ….. that ….. i had an unfortunate allergic reaction to tomatoes and my throat pretty much closed. still feels like i’m swallowing a cactus but slowly making progress! thank u all for your love and understanding. can’t wait to get back to performing and to make it up to Tampa and Orlando in November.
p.s. there is NOTHING MORE UNFAIR THAN AN ITALIAN WOMAN DEVELOPING AN ALLERGY TO TOMATOES IN HER MID TWENTIES…….

That’s crazy! I’ve heard of people developing allergies to things they previously weren’t allergic to and that scares me so much. I always keep an Epipen in my purse for this reason. One of my son’s babysitters had a sudden allergy and didn’t know what was causing it. We were living in Germany at the time and they put her in a special food clinic for an entire week to gradually introduce food to find the source of her allergy. She was an American student and that’s the kind of amazing care they gave her, which is unheard of for anyone but the richest people in the states. (I regularly hear about average German people going to clinics for treatments which are fully covered.) It turned out she was allergic to barley. Anyway I think about that sometimes when I consider the despicable state of healthcare in the US. If Ariana was just an average 25 year-old, she may not have gotten answers for a while. I’m glad she’s ok and recovering and I am so sorry to those of you who have life threatening allergies like this!

all he does is stare at me

no one: me: and that’s how the grandes met the chipolones