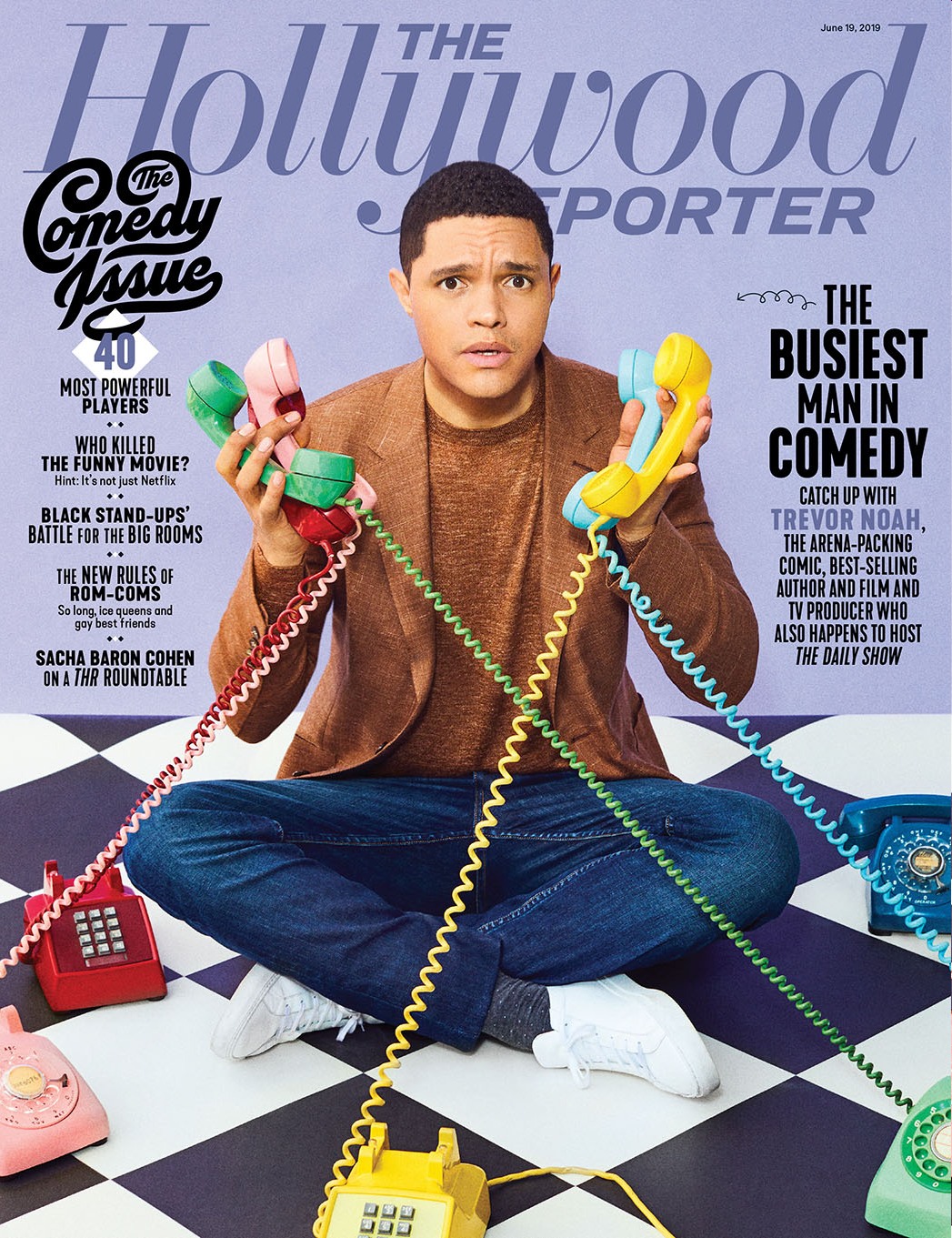 Trevor Noah covers the latest issue of The Hollywood Reporter, and it’s basically a hype piece for everything Noah has going on – his successful memoir, Born a Crime, which has been made into a film starring Lupita Nyong’o; his stand-up; his various side projects; and of course the Daily Show. I was startled to realize that it’s actually been four years since Noah took over from Jon Stewart. Probably because I haven’t been watching? I know many of you enjoy Noah and his version of The Daily Show and I get that, but I can’t. I find him sort of smarmy, honestly. But I enjoyed reading this THR piece, it put some things in perspective for me, and I admire how he negotiates and knows his worth. Some highlights:

How he was already familiar with Donald Trump’s African-dictator vibe: “I know what it’s like to live in a country that’s extremely divided by race — where people feel like it’s crashing every day and they don’t trust that their president has their best interests at heart. And we joke about it not to minimize it but to try and heal the wounds. Where there’s no conflict, pain or tragedy, I don’t know what to do. I’m a horrible superfluous comic. If anything, I’m only trained in this.”

The difference between South Africa & America: “The biggest difference in [being black in] the U.S. is learning how to navigate white spaces with a certain level of deftness about you. Where I’m from, you talk [back] to police. Here, I have to be afraid of them.”

He’s single & not planning on settling down anytime soon: “I don’t want to have a child before I believe I want a child; I also don’t want to be in a position where I resent either the child or The Daily Show for taking time from the other. What I’ve come to realize is that life is not as urgent as you think it is. So for me, right now, it’s head down and grind, and I don’t feel guilty like I’m abandoning or deserting anybody because I’m single. My wife is The Daily Show.”

Negotiating his Daily Show contract: “I remember I said, ‘I’ll have to figure out how I’ll manage with taking a pay cut,’ and they were like, ‘What do you mean a pay cut? You’re going to become host of The Daily Show. And I go, ‘Yes, and I know this is hard for an American to process, but you can be very successful working in the rest of the world. Please don’t think I’m belittling you. … I just have to make sure I’m not giving up the world I’ve built for myself for something that somebody else controls.'”

The old tweets which almost derailed his career & why he didn’t apologize: “In many ways, social media and comedy are time stamps of who we were … and if you’re not disgusted by what you did when you look back five, 10 years ago, then I’d argue you haven’t grown. But we live in a society where people are more concerned with the platitudes of apologies than they are with the actual change in human beings. I just don’t think it’s healthy for us to berate and destroy people for who they were versus who they are because ‘are’ is more important. And that’s the problem I have with the ‘cancel culture’ a lot of the time — you condemn people to only being that forever. What’s the value of atoning if it doesn’t mean you’re welcomed back into society?”

His South African success: “People don’t understand that I came to America from a country where I was really successful. And I’m proud of South Africa because that’s where I made my fortune. I had my homes and my cars and my nice things, and my country gave that to me. So I wasn’t escaping anything. I’m here because I want to be here.”

I found that a good reminder that even though Noah was “new to most of us” when he took over The Daily Show, he was already a wildly successful comic internationally and he already had a lucrative career too. It puts his decisions in perspective. But I dislike what he says about refusing to apologize for those offensive old tweets – to refuse to apologize is one thing, but what’s wrong with putting out a thoughtful statement where he could shed light on the perspective he has now, and how he acknowledges that he actually did offend people? I went back and looked at some of those sh-tty tweets and you know what? They still bug me. They still has a vein of sexism and just mean, punching-down bullsh-t. And a great way to demonstrate change is to actually apologize and acknowledge how and why you were wrong. Ugh.

Watch @trevornoah break out his Bernie Sanders impression while talking about #TheDailyShow segment on the Senator's public access show from the 80s https://t.co/FyLdtNzRda pic.twitter.com/Ji8k2hRz6O