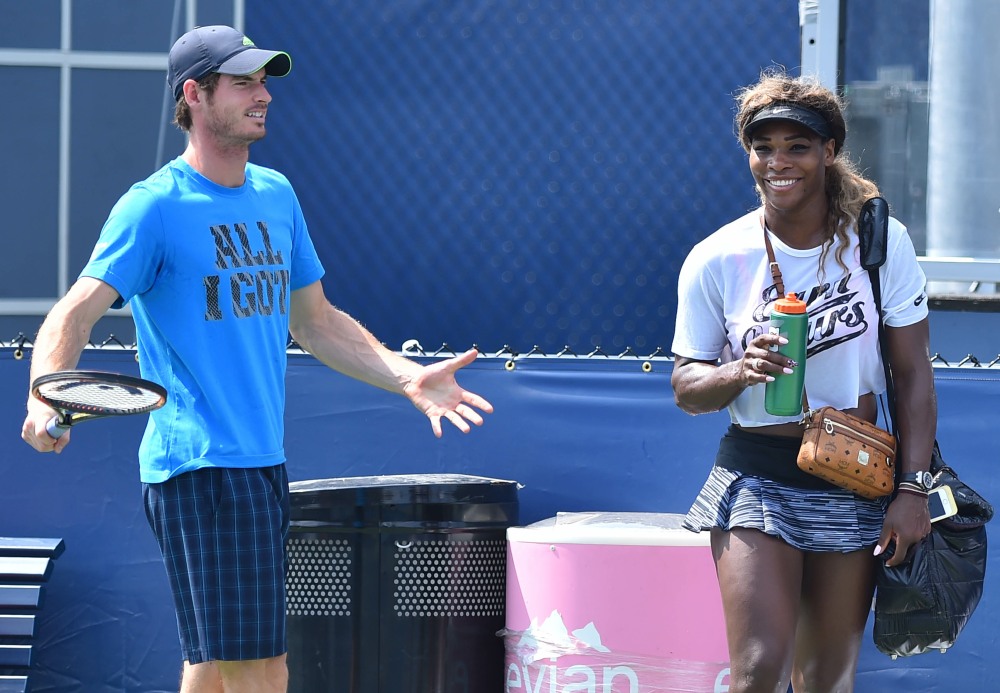 Before I get into Serena Williams’ first round and HISTORY and all of that, here’s some excellent and exciting news: Serena and Andy Murray are pairing up to play Mixed Doubles at Wimbledon! Andy Murray had hip surgery back in January, and he spent months recuperating and trying to figure out if he could rejoin the tour. He decided that he would play doubles for a few months just to work on his fitness and strength, and he proceeded to win a doubles title in Queen’s Club a week before Wimbledon. He’d been saying over and over that he was interested in playing Mixed Doubles at Wimbledon but ladies kept turning him down. Serena didn’t turn him down – she needs matches too, and she and Andy have always gotten along famously. I’m honestly expecting Murrena/Serendy to have off-the-charts sexual and tennis chemistry.

As for Serena’s first round match… she got through in straight sets. But just barely, because she was pretty rusty the entire way through. What’s going on with her serve, you guys? Still, she got the win and maybe playing Mixed with Andy will loosen her up. As we’ve been saying for years, Serena is playing with a certain goal in mind: to beat Margaret Court’s record of “24 Slams.” Serena has 23 Slam titles in singles, and Margaret Court’s record was half-way before the Open Era, when few top players played the Australian Open. CNN did an interesting piece on Serena and how she’s chasing history and what a grind that is for her. I wanted to excerpt this part:

Although the chase for Court’s all-time slam record has been a key driver for Williams and her team in the past few years, some tennis watchers query its relevance. Australia’s Court won 24 major singles titles between 1960 and 1973. She competed both in the amateur and the Open era, which began in 1968 when tennis turned professional. However, Court won 11 of her titles at the Australian Open, during a time when not all top players made the long journey Down Under. Court also played during a time when it was not unusual for players to skip slams altogether because they could make more money on the women’s circuit.

“I don’t think it is a record she [Serena] needs, and I don’t think it is a record that she should be chasing,” WTA expert Courtney Nguyen said of Serena at the French Open. “I think that in a lot of ways her chasing the record, validates the record. When really the [main] record, it was Steffi’s record, which she already broke. When Steffi got 22, no one said, ‘Oh, you need two more to get to Margaret.’ It was just, holy crap, you are the greatest of all time, you have 22 majors. It’s a false record.”

Although Williams and Federer, the men’s Open era record holder with 20 major titles, are both now in their late 30s, the two tennis superstars have a different mindset when they take to the court in the latter stages of their careers.

“Roger gets to plays freely in the last years of his career,” said Nguyen. “It is all a celebration, and he just gets to play, and there is a lightness around him. Whereas every time Serena takes to the court at a major, there is a heaviness, there is a stress, there is an anxiety, and that breaks my heart, because she is chasing a thing I don’t think she needs. And if she doesn’t get it, now that she has chased it, it feels like she is missing something. But she never needed it.”

I have a real question: say that Serena gave birth and came back to the tour with a huge bang last year and ended up winning either Wimbledon or the US Open (she made both finals). Then she would have had 24. Say she would have walked into every Slam this year knowing that she could get over the “line” and get 25 and then… she does it, somewhere. Do you think she would have quit THIS year if she had gotten to 25? I really do think she would have. I’m not saying that’s right or that Nguyen doesn’t make an excellent point, I’m just saying that SERENA has set that goal for herself. Serena is the one who wants the record to be without question, without an asterisk of *WELL TECHNICALLY MARGARET COURT WON 24. But as Nguyen says, it’s a false record. By chasing Court’s record, Serena validates Court’s record. It sucks.

Her Wimbledon kit wasn’t the most flattering thing, but I think Serena just likes the cutouts. They’re so awkward. I like the Swarovski-crystal “broosh” though.