Jeff Bezos & Lauren Sanchez are so in love, they’re not even discussing prenups 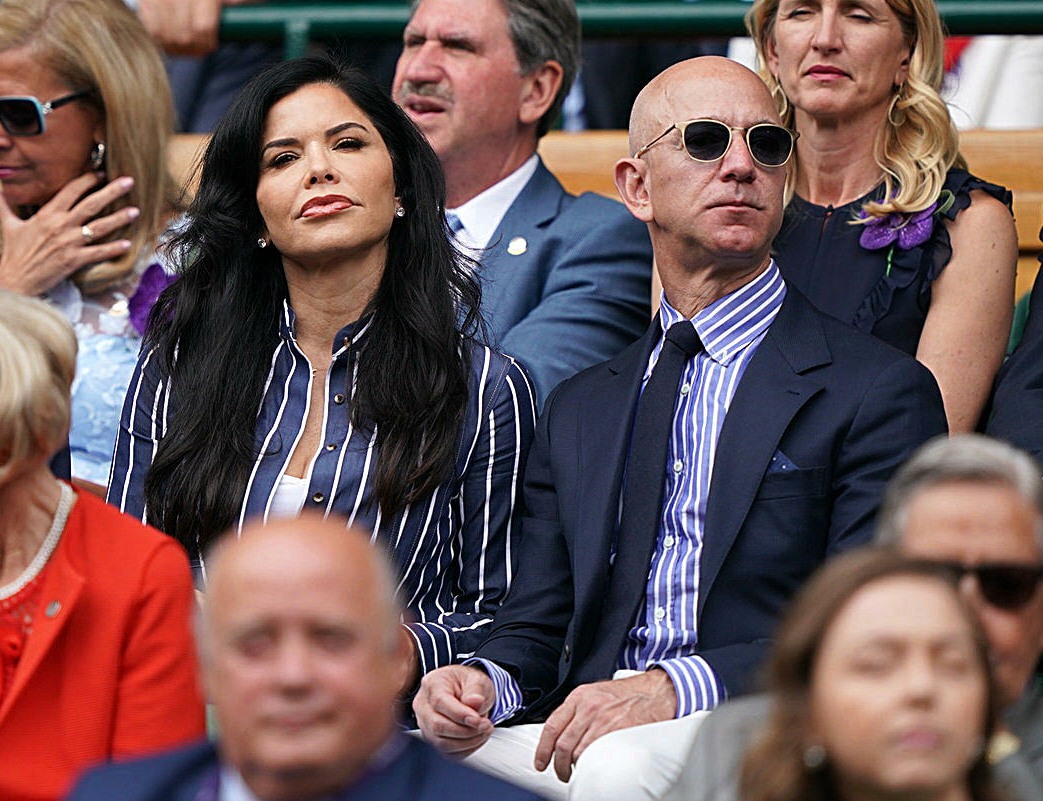 Jeff Bezos and his mistress-turned-jumpoff Lauren Sanchez made their public-couple debut at Wimbledon, at the men’s final. They sat in the Royal Box and did a loved-up display. It was kind of gross on multiple levels, but whatever – they’re both single now, and clearly their ex-spouses are better off without them. Bezos and Sanchez sort of deserve each other, just my opinion. He especially deserves to stare at her plastic joker-face for the rest of his life. Apparently, that’s what he wants. Page Six has a lengthy piece about how Bezos and Sanchez are obviously heading for marriage and they’re so in love, there’s not even talk of a prenup. Some highlights:

On their Wimbledon appearance: “They weren’t trying to upstage anyone, they were just happy to be together — as Jeff made uncomfortably clear when he couldn’t keep his hands off Lauren!” said a Jeff insider. As a friend of the couple told The Post, Jeff and Lauren feel like “a ton of bricks has been lifted off their shoulders.” They’ll likely marry soon too. Jeff and Lauren are just so happy and they want the world to know,” said a Lauren pal. “They feel free now.”

No talk of prenups: According to a second friend of Lauren’s, the couple “doesn’t even think” about pre-nups. “Both of them have more money than they could ever spend, but this doesn’t even register.” Plus, the second friend said, “Jeff just gave up $38 billion to be with Lauren. I guarantee [pre-nup] conversations will come up closer to a wedding date, but right now, it’s not even a subject.”

Their kids from their previous marriages: They’re said to be “bird-nesting” with their exes — meaning, Jeff’s ’ four kids stay at one home while he or ex-wife Mackenzie move in or out for days or weeks at a time, and Lauren and her ex, Hollywood power agent Patrick Whitesell, do the same with their two daughters. (She also has an 18-year-old son, Nikko, with former NFL player Tony Gonzalez.) “The bird-nesting is actually going better than anyone expected,” said the Lauren pal. “Above everything, everyone involved in this brouhaha were concerned about protecting the kids. Lauren has plenty of help with the children thanks to Patrick and her family. She has a huge support system, and this allows her to travel with Jeff.”

Lauren’s ex-husband gave Lauren & Jeff the Wimbledon tickets? “Patrick is . . . a great man, who’s got a lot of dignity. When the scandal hit and Lauren was being slut-shamed, he told friends that he didn’t want anyone attacking her,” said a Patrick source. “His relationship with Lauren is probably better than it was before the divorce.”

They’ve been through so much: “It may not be perfect, but they’re not looking for perfection,” said the Lauren pal. “They’re happy to be moving on with their lives together. Now they can be free without worrying about anyone. The outside influences have been neutralized. They’re really in love. What you saw at Wimbledon is who they really are. They’ve gone through so much to be together.”

“They’ve gone through so much to be together.” I really hate this phase of any affair/jumpoff situation, where an affair has ended one or two marriages and then the couple having the affair becomes an “official” couple and we’re supposed to feel sorry for everything they “went through.” I get that divorce can be difficult, but don’t f–king ask for sympathy when you’ve gotten a divorce because you were screwing around. That’s not sympathetic. It’s LeAnn Rimes-esque. Also, were people truly “slut-shaming” Lauren Sanchez, or were we obsessed with the conspiracy theories about how she and her shady Republican associates and relatives honey-trapped the richest man in the world for some kind of political payback? I don’t know.

As for the “no talk of prenups” thing… good lord. I kind of wonder if Jeff Bezos is the kind of man who is amazing in business, in negotiations, in making executive decisions and all of that, but in his romantic life, he just makes the worst f–king decisions.

82 Responses to “Jeff Bezos & Lauren Sanchez are so in love, they’re not even discussing prenups”