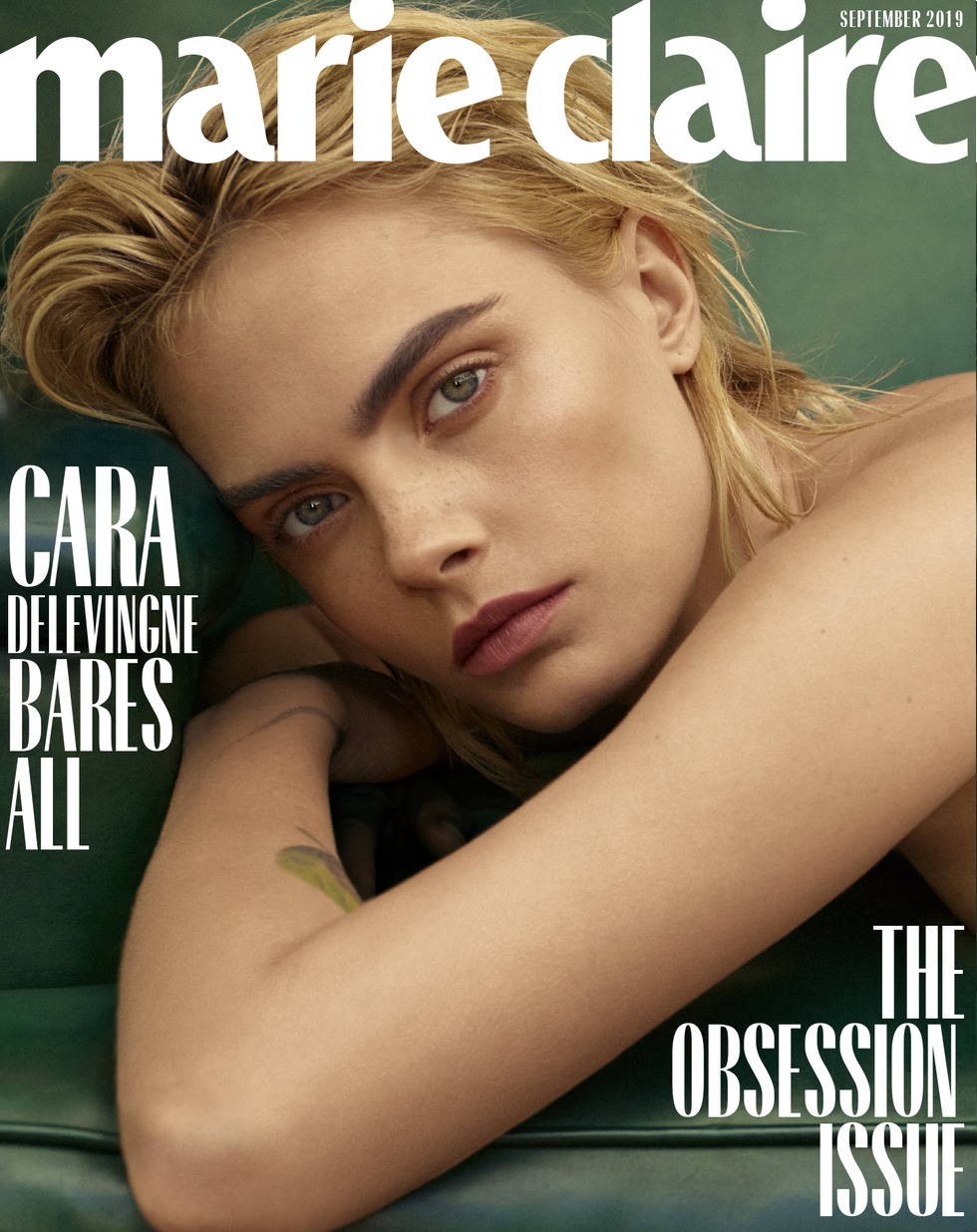 Alright, I’ll give Cara Delevingne some credit: this is a good cover. Cara covers the September issue of Marie Claire, and she managed to turn what could have been a neutral shot into something else. There’s Cara’s sullen air, almost like she’s challenging us to a fight without saying a word. And yet she doesn’t look angry? I’m telling you, it’s a good cover. Good colors too, love that shade of green. Anyway, Cara covers MC to promote her latest acting project: the Amazon series Carnival Row, which is sort of like Penny Dreadful but… more political, I guess. It’s set in sort of funhouse-mirror Victorian London and Cara plays a fairy. Sure. You can read the full MC piece here. Some highlights:

On her girlfriend Ashley Benson: The two met in the spring of 2018 on the set of Alex Ross Perry’s Her Smell: “We weren’t looking for it,” Delevingne tells me. “It was really just very authentic and natural.” I can’t help but feel that she may be doing some emotional transference when she describes Benson’s dogs as “f–king adorable” with the “f–king calmest dispositions. These two”—she gestures at her own pups—“are psychopaths” that have been punishing her for a recent absence by relieving themselves all over the house.

On Carnival Row: “It’s the first [thing] I’ve done where I’m really full-blown acting.” The role was taxing; fairies fly, which meant she had to master wirework. And learning the stunts was nonnegotiable: “If I hadn’t done them, I wouldn’t have been able to get there emotionally. Physicality to me is a very important way of expressing emotions.” That’s true in life too. When she struggles to process her feelings, she’ll turn on Fiona Apple or Lauryn Hill “and throw myself around and cry. They scream and you just feel it.” She grabs her neck and moans. “Just that raw female ahhhh!”

Her posh childhood: “I hope people never think I’m complaining. I had an incredible upbringing. I went to amazing schools. We were able to go on holiday.”

Her mom’s heroin addiction: “I was a nurturing child and wanted to make sure everyone was OK. It didn’t feel wrong. But looking back, I’m like, Oh, maybe I shouldn’t have been put in that position. But I wasn’t put in it; it just happened.”

On Harvey Weinstein: She was one of the cascade of women to lodge allegations against Harvey Weinstein, describing on Instagram an incident in which he lured her up to a hotel room and tried to kiss her. When other women came forward, “I was like, Oh my God, that means I was abused? I don’t think he’ll ever be able to repay what he’s done.”

Learning how to be alone: These days, Delevingne is embracing the proverbial “balance.” She drinks celery juice. She spends time alone, which used to be tough. Her family is closer now: “It’s taken time to grow apart, get some boundaries, and come back together.” She’s no teetotaler but is conscious of her inherited addiction risk—“We’re all addicted to something,” she says, indicating her phone—and tries to avoid “habitual things. I shouldn’t do the same thing every day, apart from breathing and eating.”

Her sex positivity. “I’m not just talking about sex for sex. I’m talking about experience, whether it’s abuse or confusion, positive or negative.”

Obviously, I’ve never been a fan of Cara, but I’ve covered a lot of her interviews and shenanigans over the years, and she sounds better here. She sounds like she’s calmed down a lot and matured a bit. I noticed the change when she fell for Ashley Benson too – suddenly, Cara wanted to be a better person, and a more private person too. She’s got the love of a good woman and it shows. And honestly, that was what Cara needed: to be in a real relationship where she could feel safe and secure. And then other sh-t fell into place. 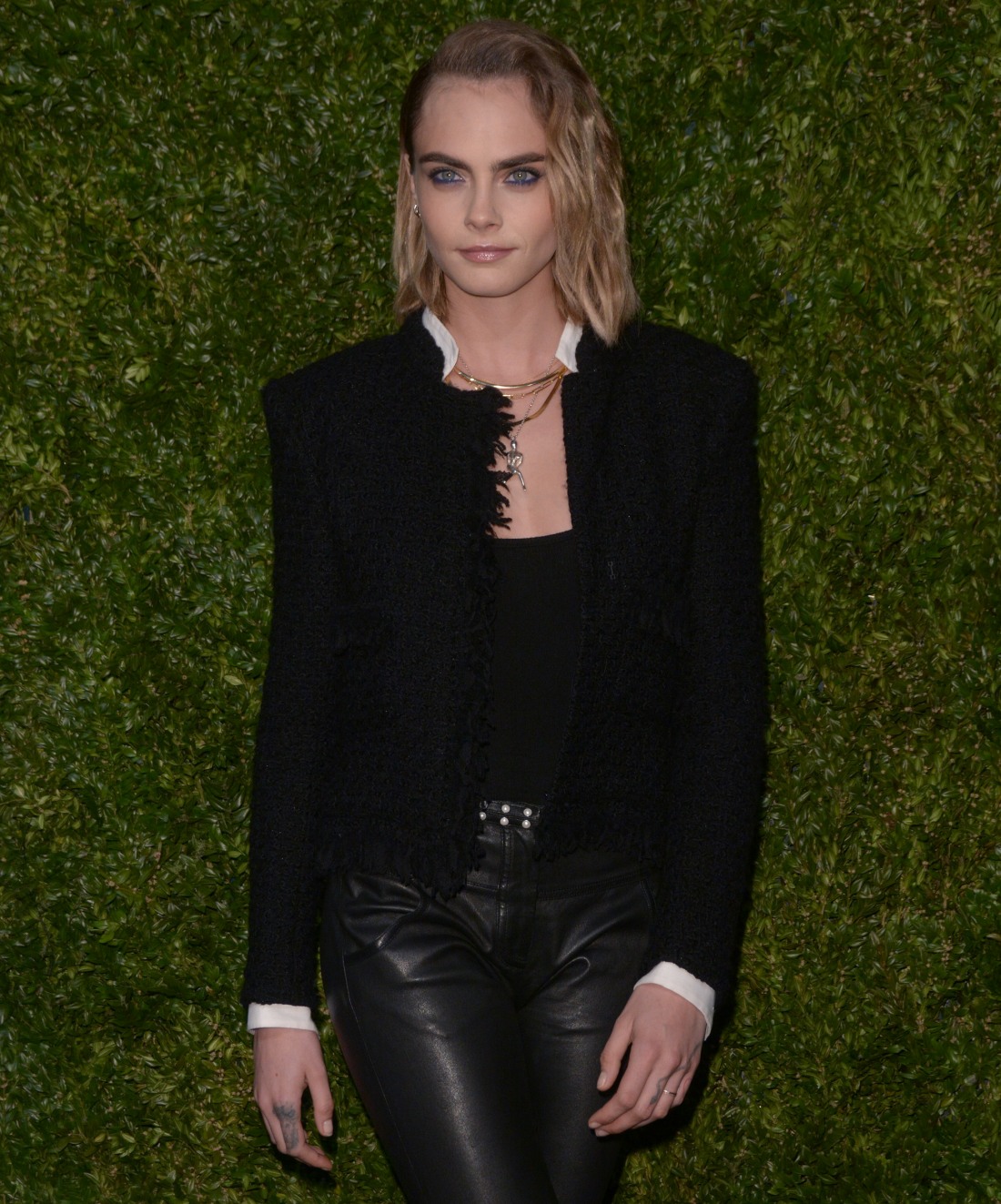