Home is where the cozy is. Thanks @dominomag for a beautiful day in my New York digs. Mi casa es su casa. ❤️ My thoughts on home and a peek inside in the link in my bio! . @dominomag, interior decoration by @arielokin, photography by @albertozanetti77, produced by @kateberryberry, fashion styling by @chrishoran20 #SOdomino

Lena Dunham covers the latest issue of Domino Magazine, which is apparently some kind of hipster-twee version of Home & Garden, I think. Do they still do Elle Decor? It’s like that, only full of cheap tchotchkes and furniture from the 1980s. Maybe I’m unfairly judging this magazine by focusing only on Lena Dunham’s ghastly New York apartment, but in all fairness, I would bet actual money that Lena tried unsuccessfully to get her apartment into Vogue, Home & Garden or Elle Decor and they rejected her because of her terrible interior design skills. I mean, on one side, her home is better than mine. On the other side, she has money and access to people with taste and THIS is what she chose. You can see the whole Domino spread here. Some highlights from her twee AF “essay”:

Lena pretends that her childhood had lean years: “My mother would be mad if this made us sound like we had a lot of money to hurl around (as artists, sometimes we did and sometimes we didn’t, like the year that Christmas was a tiny newspaper tree and Indian takeout from 6th Street) or made her sound like a covetous jerk… She hunts on eBay for Danish wood candlestick holders and milky Murano glass, and the walls [in her current farmhouse] have art by everyone from Richard Prince to Matisse to me in third grade.

Her first apartment: “I thought I was content when I moved out at 26 (too old, I know, I know) and bought my first apartment: a prewar deal so good that other New Yorkers became angry when I told them (I got it off a dead guy who nobody liked! That’s the secret!).

Her second apartment, the one she bought with Jack Antonoff: “Life happened and I fell in love and whispered those terrifyingly vulnerable three words: “Let’s buy something.” And soon I was pounding the pavement looking for a place where we could build a future, consider children, and install that much fetishized Sottsass shelf. I wanted to live in another creaky decrepit-glam enclave, and I told the real-estate agent that my passion was moldings—all of them! Any of them! My man was afraid of dust. So we bid on an apartment that hadn’t even been built yet, and I spent the year making obsessive scrapbooks just like my mother before me. I planned for wallpaper (my friend Payton Cosell Turner’s Flat Vernacular does the best, and I’ve had the same pattern in three bedrooms in three apartments) and bought Josef Frank pillows and Nancy’s Blushes Farrow & Ball paint for the bedroom. I had art by Rob Pruitt and Ellen Berkenblit ready to go (queer and female painters are my thing).

Jack hated her style: “I even had all my mother’s Melmac dishes in queasy pastels. He was on tour, so she and I set the kitchen up, stuffed the closets, and placed the tchotchkes on the mantel for the great unveiling. And he hated it. He didn’t want to hate it. He tried not to hate it. But he didn’t like living among the insides of my mind. I thought I was giving him a gift, like the time I came home from summer camp and my mother had painted my walls four different chalky colors and installed a poster, a candle shaped like a slice of honeydew melon, and an inflatable chair. I wanted to give him the magic that she’d always given me by dreaming her maddening dreams. But he wanted a Restoration Hardware couch and a giant watch to hang on the wall. I felt sick every time I made a design concession or covered up pink with dove gray. Love can only survive so much. At night, I mapped out my dream space in my head: A massive bed with an ornate headboard. A pile of the vintage Harlequin novels that Jemima finds at flea markets. It doesn’t matter where the dog pees. The rooms don’t have to be big; I mostly curl into a ball.

Her current apartment, a rental: “The space isn’t big but it’s perfect for pacing, and every day I do laps through all the doors like I’m in a slapstick comedy from the 1930s, amusing myself. When the people on 8 tried to floor-shame me, I told them what I love about 2: If you’re an introvert and often homebound, by illness or sadness or both, it feels like the passersby on the street are right there with you. They are my built-in friends. Across from me is a luxurious brownstone, but I’m not sure how it’s decorated. I’ve stopped looking in other people’s windows.”

Lena Dunham has a “tell” in her writing, if you want to call it that. She thinks she’s telling a story about how cute she is and how avant-garde she is, when really she’s explaining in horrific detail why she annoys the f–k out of every single person around her. I mean… she decorated her first shared home, her first live-in boyfriend situation, in all-pink and ‘80s lucite and tchotchkes and f–ked up dead dog paintings and then when Jack hated that sh-t, she felt like she was DYING. It literally never occurred to her that she has bad taste and compromising would be a lovely thing to do for the man she loved. TL; DR version: Lena is tacky. In every aspect, especially interior design. 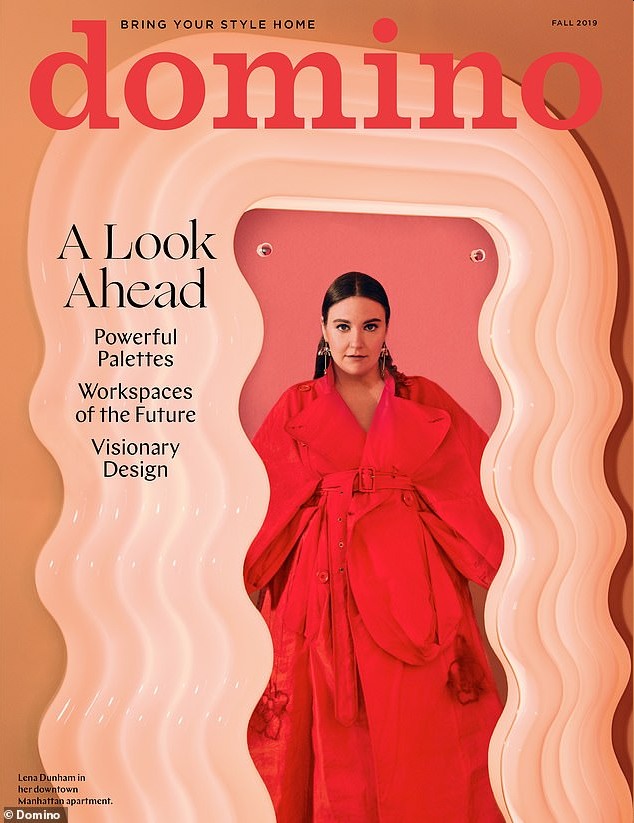