Us: Katie Holmes was disrespected by Jamie Foxx, who cheated on her for years


Embed from Getty Images
As we heard earlier this week, Katie Holmes dumped Jamie Foxx sometime this spring after six years of dating mostly undercover, right after they made their FIRST public appearance together at the Met Gala. Jamie was most recently seen out with a girl young enough to be his daughter, a singer whom he claims he’s helping out (sure he is). We know Katie dumped Jamie because a source told Us Magazine (if that’s true and I believe it). A source also told Us that Jamie cheated on Katie for years. This isn’t surprising at all.

Not on the same page. Katie Holmes and Jamie Foxx were living very “different lives,” which ultimately led to their split, an insider reveals to Us Weekly exclusively.

“It has been many years of him stepping out with other women,” the source says. “He’s disrespectful and their lives were different. His partying ways don’t fit with hers as she’s focused on raising her daughter and working.”

Speculation of a breakup between Holmes and Foxx started earlier this month when the “Blame It” rapper was seen with two different women in Los Angeles. The Ray actor was first seen with a mystery blonde at clubs Delilah and Highlight Room on Thursday, August 15. Two days later, he was spotted holding hands with singer Sela Vave at Bootsy Bellows in West Hollywood.

The rest of the article is a recap of stuff about their relationship which we already know. I believe that Katie dumped Jamie, because he’s acting like he’s hurt. He’s been taking these other women out to paparazzi hot spots as if he has something to prove. Although there were a couple of staged outings with Katie over the years, I distinctly remember a beach photo op, he didn’t take her to the LA celebrity spots! I bet Jamie thought Katie would stay on the back burner and he could take her back whenever he wanted, because it sounds like that was their pattern. She didn’t do that this time so he wanted to let her know he’s over her. By being petty like this he’s the one showing that he’s hurt. (See also: Miley Cyrus.)

Let’s play who should Katie date next. Maybe an agent or lawyer type, someone adjacent to her industry but not as famous as she is. Ooh I would love for her to get with someone funny who can make her laugh, like a comedian or up-and-coming actor who isn’t in it for the headlines and will be crazy about her.

After I wrote all that I found this story about a video that Jamie Foxx, 51, made about his relationship with that extremely young singer, whom a source previously told People was “just a girl,” a “young singer” he was “helping out” Here’s what he said. He claimed he discovered her, basically, and is mentoring her:

“When I met Ed Sheeran, I didn’t know him from Adam. He slept on my couch for six weeks — he ended up going on to do great things,” Foxx said of the British singer.

“Nick Cannon was 13 years old, he would sleep in my old house. Before Ne-Yo was Ne-Yo, he would come to the crib,” Foxx continued.”Everybody comes to my crib, no matter who you are.”

“But here was the thing, there is a young lady by the name of Sela Vave. I did the same thing with her.”

Foxx shared that he was introduced to Vave by one of his other artists. He then got to hear her sing on the front steps of his house — a moment that Vave has shared on social media.

“She’s singing broken down Beyoncé, playing the guitar and I said ‘How the f— did this happen?’”

“So, we took her under our wing,” Foxx explained.

The star then explained the photographs taken of himself and Vave holding hands as they left Bootsy Bellows nightclub last Friday.

“I’m escorting her to my car, to put her in the car — my artist, who hangs out with my kids and is as young as my daughter,” Foxx said.

“People try to make mountains out of molehills. We want to treat her the same way and give her the same opportunities,” Foxx said, adding that he warned Vave of the “haters.”

“I told her it’s going to be this way. It’s a double standard when it comes to women,” Foxx said.

Foxx said that he chose to speak out because “we protect our own.”

“I spoke to that girl’s mom, and she put her trust in me,” Foxx said of Vave. “We want to make sure she has the opportunity to show you the talent we saw. All of the unnecessary hate for the woman, just because the guys are coming here and they’re working hard, but when a girl does it, she has an ulterior motive. Stop that s—.”

“I embrace all the artists [who] come here. That’s our artist. She’s been brought into the family, she works hard, and she’s a beautiful singer.”

Vave also slammed the trolls in the caption of Foxx’s live video, writing, “For the people who care… here is the TRUE story… for everyone else you can keep talking and calling me a w—-, slut, home wrecker, thot, gold digger, that I should die, and whatever else you want.”

“It doesn’t matter to me, I’m out here to work and do what I love most. #music #killthedoublestandard.”

I couldn’t see that video because it’s expired. It’s somewhat convincing to me and maybe he’s telling the truth. However, where is the part where he says “there is absolutely nothing going on between us and I’m offended by that?” Do you know what I mean? This sounds genuine, but he could have said something like that. Also, he knew how this would look. He knows there are photographers outside Bootsy Bellows. He could have written a statement denying any romantic relationship with her and posted it to IG. I’m just still kind of skeptical and I’m sure he gave these type of excuses to Katie.

Jamie Foxx Speaks Out After Split to Defend Singer, Whom He Was Seen Holding Hands with https://t.co/in7S1ghkqW

Jamie posted this photo with his daughters on the set of Beat Shazam, the name that tune show on Fox which he hosts. He also posted a photo with his sister. This makes me think that he easily could have gone out with family or guy friends to be photographed, but that wouldn’t have gotten press or Katie’s attention, would it?

#daddydaughtertime on @beatshazamfox. We’ve had an incredible season, seen so many lives changed, heard amazing stories and had a blast!!! Thank you to all u THE FANS for tuning in!!!! Lastly, much love to our contestant Alan who is no longer with us but shed his light on all of us, God Bless his family. #beatshazam #foxxonfox

Nothing like the love from my sis… it’s unwavering… it’s endearing… and most of all it’s REAL!!! @frequency11 I got u forever!! And I know u got me… we Texas all day. #noholllywoodshit #nofakelove

This photo of the two of them out in NYC is from April. 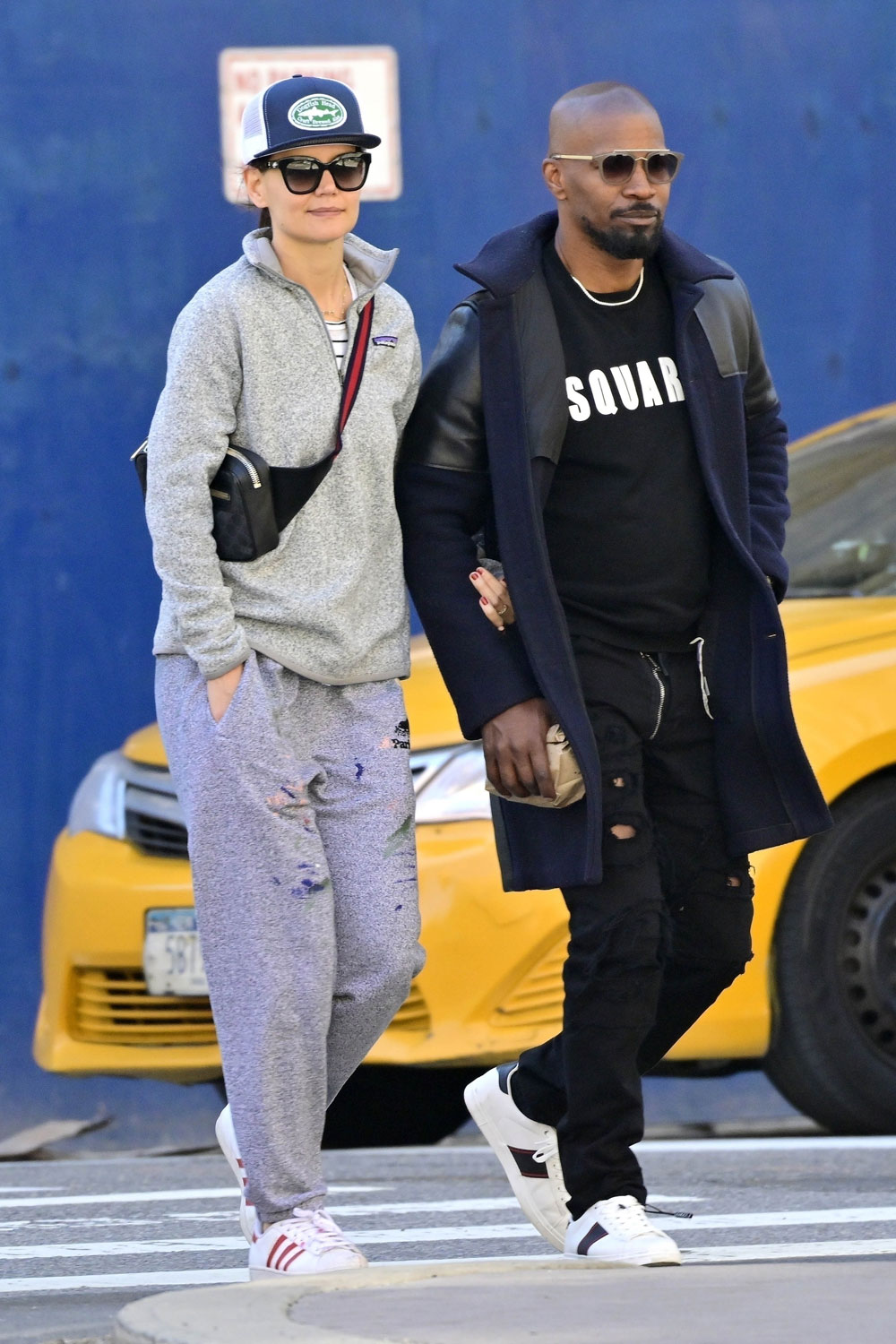 Katie on June 29th in Disneyland: 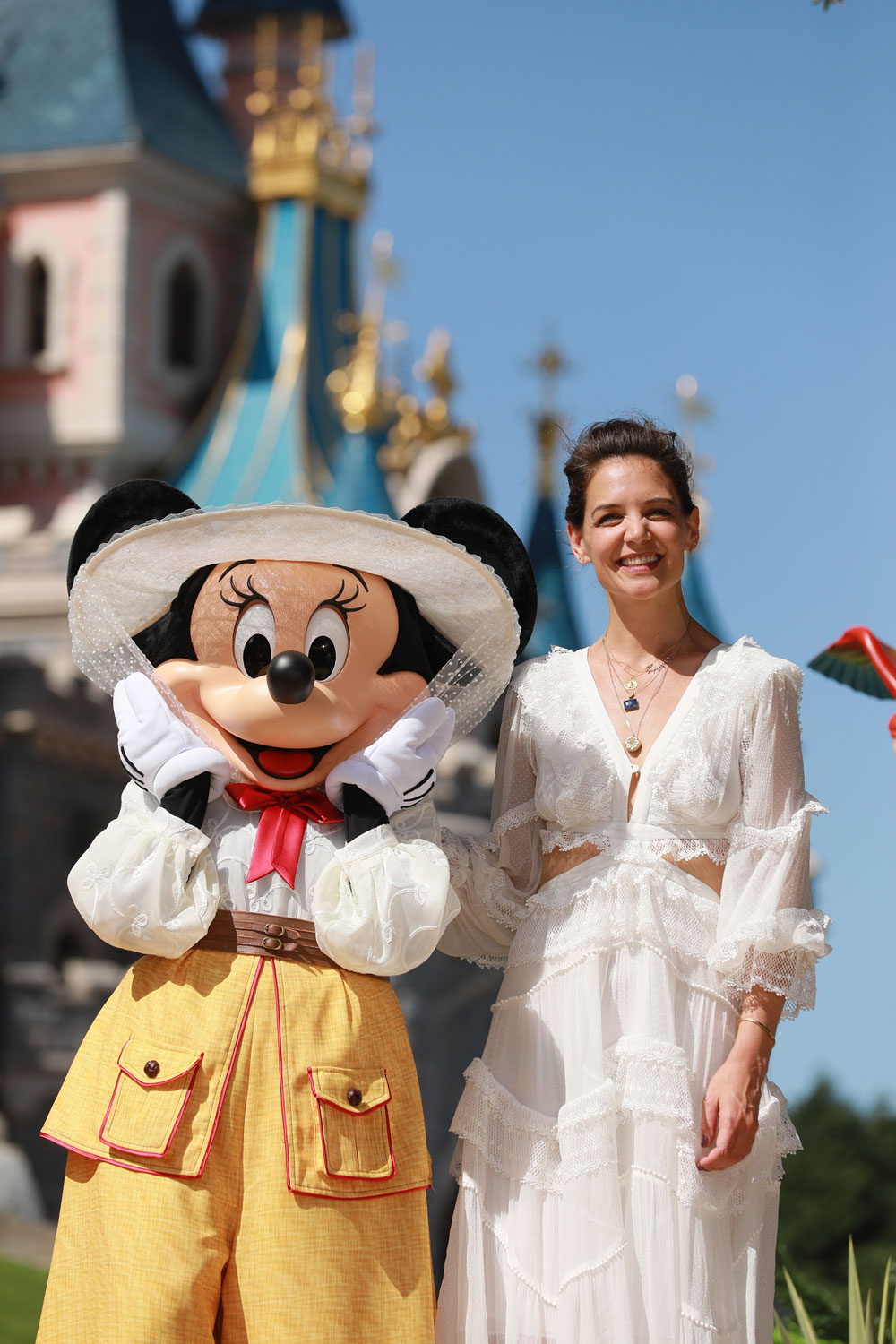 63 Responses to “Us: Katie Holmes was disrespected by Jamie Foxx, who cheated on her for years”