Halsey on being a Libra: I do what I want & then I want everyone to love me 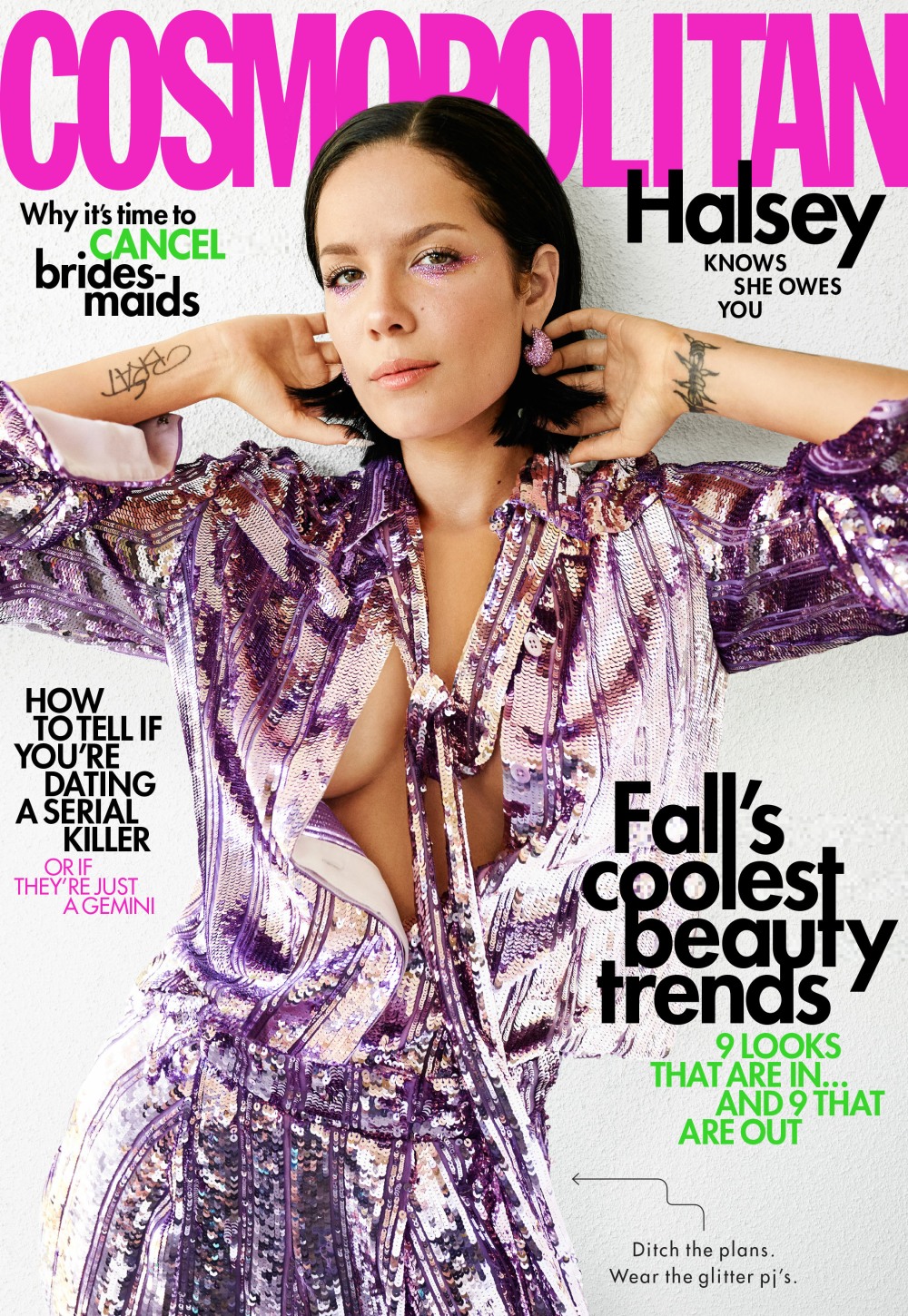 Y’all know that I’ve sort of come around on Halsey. At first I thought she was too much, too over the top, too melodramatic in interviews. But over the past few years, she’s dealt with her mental health issues in healthier ways. She seems to be taking care of herself a lot more. She knows her limits and she doesn’t treat interviews as long-winded therapy sessions. So, I mostly enjoyed her interview with Cosmopolitan. First, a word about the cover – she’s a shape-shifter, right? Every time I see her, it takes me a minute to realize who I’m looking at. I thought this was Lily Allen. As for the interview, it’s fine. She sounds okay. Some highlights:

On being “pretty regular”: “I’ll sometimes look at other artists who seem so larger-than-life and wonder, Am I not supposed to be here?”

On being an open book about her past: “I shared a lot about myself, assuming the world would be kind. And that hasn’t quite been the case.”

On being a Libra and wanting everyone to love her: “That’s the problem: I’ll do what I want, knock down everyone in my path who says I shouldn’t, and then when people don’t like it, I’m like, ‘Why?!’”

On how music has helped her manage her energy: “I have bipolar disorder, and I get bored of sh-t really quickly. Music is this thing that I get to focus all my chaotic energy into, and it’s not a void that doesn’t love me back. It’s been the only place I can direct all that and have something to show for it that tells me, ‘Hey, you’re not that bad.’ If my brain is a bunch of broken glass, I get to make it into a mosaic.”

On her identity as a poet: “It’s ironic having to explain to people that I’m a poet. It’d be like talking to Michael Jordan about baseball and saying, ‘Oh you’re gonna try basketball?’”

On the moment that zapped her back to life after her messy split from ex G-Eazy: “I was doing Good Morning America and I’m in a blonde wig and white patent-leather outfit, twirling around while I’m going through a heinous breakup. I look down and there are these two girls, one with pink hair, one with blue hair, septum piercings, cool as f*ck, still loving me, probably knowing what a weird time I’m going through. I looked at them, looked at myself in my sparkly Britney Spears outfit, and went, Ohhh no, they deserve better than this. If those girls can be that brave in who they are, then I owe them better than this homogenized bullsh-t. But hey, if the worst thing that’s happened to me so far is I wore dumb clothes and dated a sh-tty dude, I think I’m doing alright.”

There’s that steady and generous vein of self-absorption, of endlessly trying to define yourself by not defining yourself and talking about how you are too wild to be defined, to be just one thing. I mean, I get it – she’s a woman in full, with diverse interests and passions. But one of her biggest passions is thinking about who she is and trying to describe herself to people. Anyway, she’s right about the G-Eazy thing and I like that she’s giving herself a break. Of all the sh-t she has to deal with, the fact that she sometimes goes full “pop star” and also dates sh-tty dudes is not even the worst thing to happen. 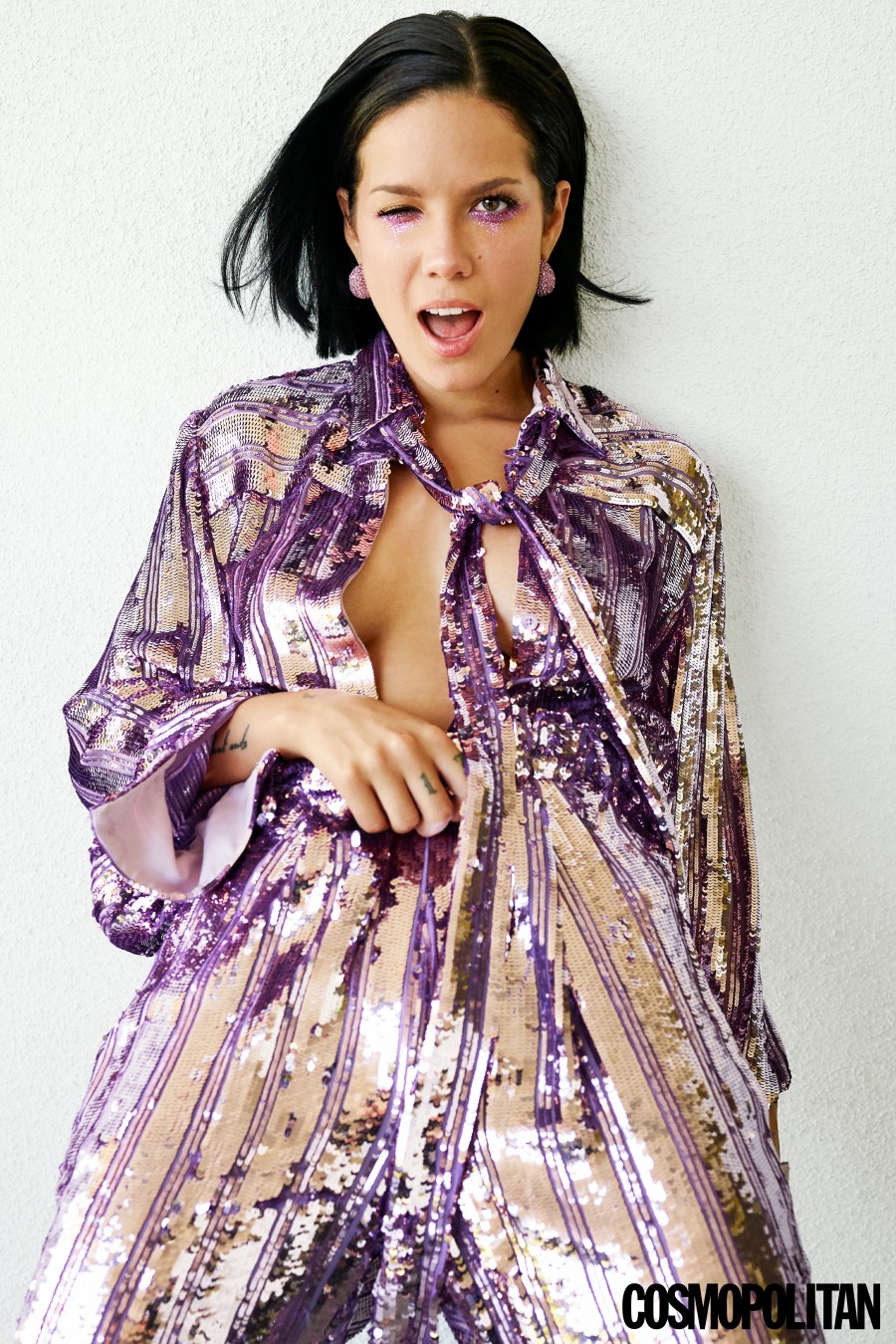 14 Responses to “Halsey on being a Libra: I do what I want & then I want everyone to love me”