Billie Eilish: ‘I don’t know what it feels like not to be a teenager’ 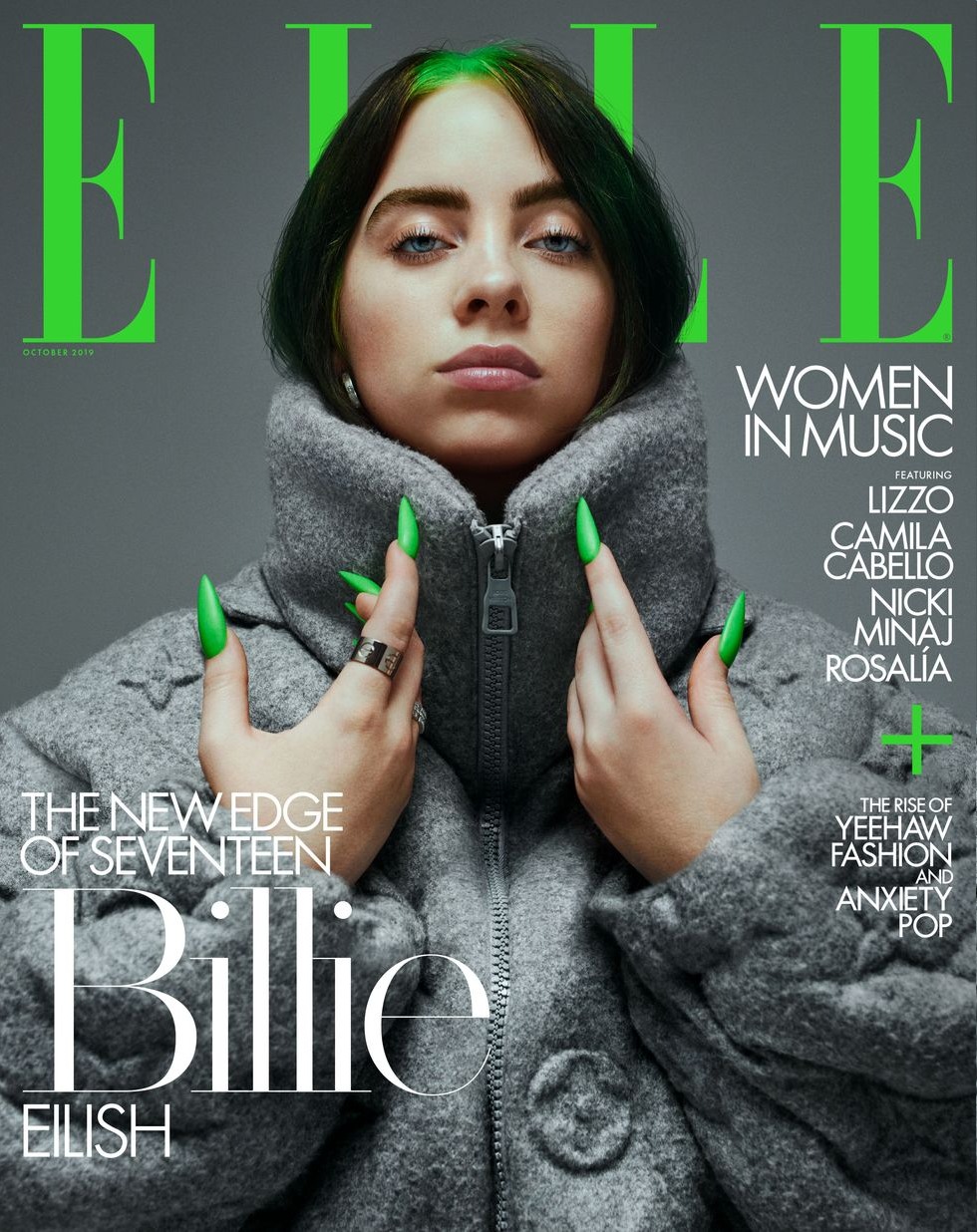 Billie Eilish is one of the cover stars of Elle’s Women In Music issue. Do you want to feel absolutely ancient? Elle points this out in their intro: Billie is “the first number one artist born this millennium, and too young to have ever owned a CD.” I am so old. Anyway, like all of Billie’s magazine profiles these days, she’s A LOT. She’s still just 17 years old (18 in December) and she has all the angst, attitude and anxiety of any given teenager, and then some. One minute she’s the most confident person in the world, the next minute she’s a wreck who can’t be alone. This profile is a mess, but it’s glorious too. Billie just IS. Some highlights:

She just came back from another tour: “This was the first tour I enjoyed. That means I haven’t really enjoyed the rest of them… When there are a thousand people outside, nobody’s going through security; I don’t know that you’re all here for me, or for good things. It’s such a bummer.” She has security now, and the venues are bigger. She also brings friends on the road. “I need people. I’m a people person. For a while, I would be gone for months and wouldn’t see my friends. I’d come back, and they wouldn’t be friends with me anymore. That’s not their fault. You’re not gonna forget me, but you’re gonna forget what it felt like to love me. It sucked.”

Teen lyfe: “I don’t know what it feels like not to be a teenager. But kids know more than adults.”

Her parents didn’t push anything on her: “I’m lucky to have a family that I like, and that likes me. The only reason I do what I do is because my parents didn’t force me. If they’d said, ‘Here’s a guitar, here’s a microphone, sing and write,’ I would have been like, ‘Goodbye! I’m gonna go do drugs.’ You can’t get mad at kids, bro. People have some sh-tty families. I’m kinda shocked my parents are still together. I’m not at all trying to brag—I’m just trying to say, I feel for the people who don’t have a family that wants them to be happy in their lives.”

She’s not miserable anymore: “Two years ago, I felt like nothing mattered; every single thing was pointless. Not just in my life, but everything in the whole world. I was fully clinically depressed. It’s insane to look back and not be anymore,” she says. Some cynics have accused her of faking depression. “It hurt me to see that. I was a 16-year-old girl who was really unstable. I’m in the happiest place of my life, and I didn’t think that I would even make it to this age.”

How she covers up her body: Feminists theorize that she’s desexualizing herself; parents thank her for covering up because, in turn, so do their daughters. “You’re missing the point! The point is not: Hey, let’s go slut-shame all these girls for not dressing like Billie Eilish. It makes me mad. I have to wear a big shirt for you not to feel uncomfortable about my boobs!”

She has big boobs: “I was born with fucking boobs, bro. I was born with DNA that was gonna give me big-ass boobs.” She says her breasts have been an issue for as long as she can remember, which is why she covers them. “I was recently FaceTiming a close friend of mine who’s a dude, and I was wearing a tank top. He was like, ‘Ugh, put a shirt on!’ And I said, ‘I have a shirt on.’ Someone with smaller boobs could wear a tank top, and I could put on that exact tank top and get slut-shamed because my boobs are big. That is stupid. It’s the same shirt!”

Turning 18 soon: “I’m gonna be a woman. I wanna show my body. What if I wanna make a video where I wanna look desirable? Not a p-rno! But I know it would be a huge thing. I know people will say, ‘I’ve lost all respect for her.’ ”

Speaking as a formerly angsty goth teen with big boobs, I just have to say… I probably would have been flat-out obsessed with Billie if I was 14 years old right now. And I even like how she explains her choice to cover up her body in oversized clothes – she’s doing it so other people are more comfortable. But let’s be real, even at 17, most girls aren’t comfortable with their bodies no matter what. Like Billie, I developed early too (I was a C-cup by 14) and I wore really baggy sh-t too because I didn’t want people to look at my body. Even now, I hate body-con sh-t.

30 Responses to “Billie Eilish: ‘I don’t know what it feels like not to be a teenager’”