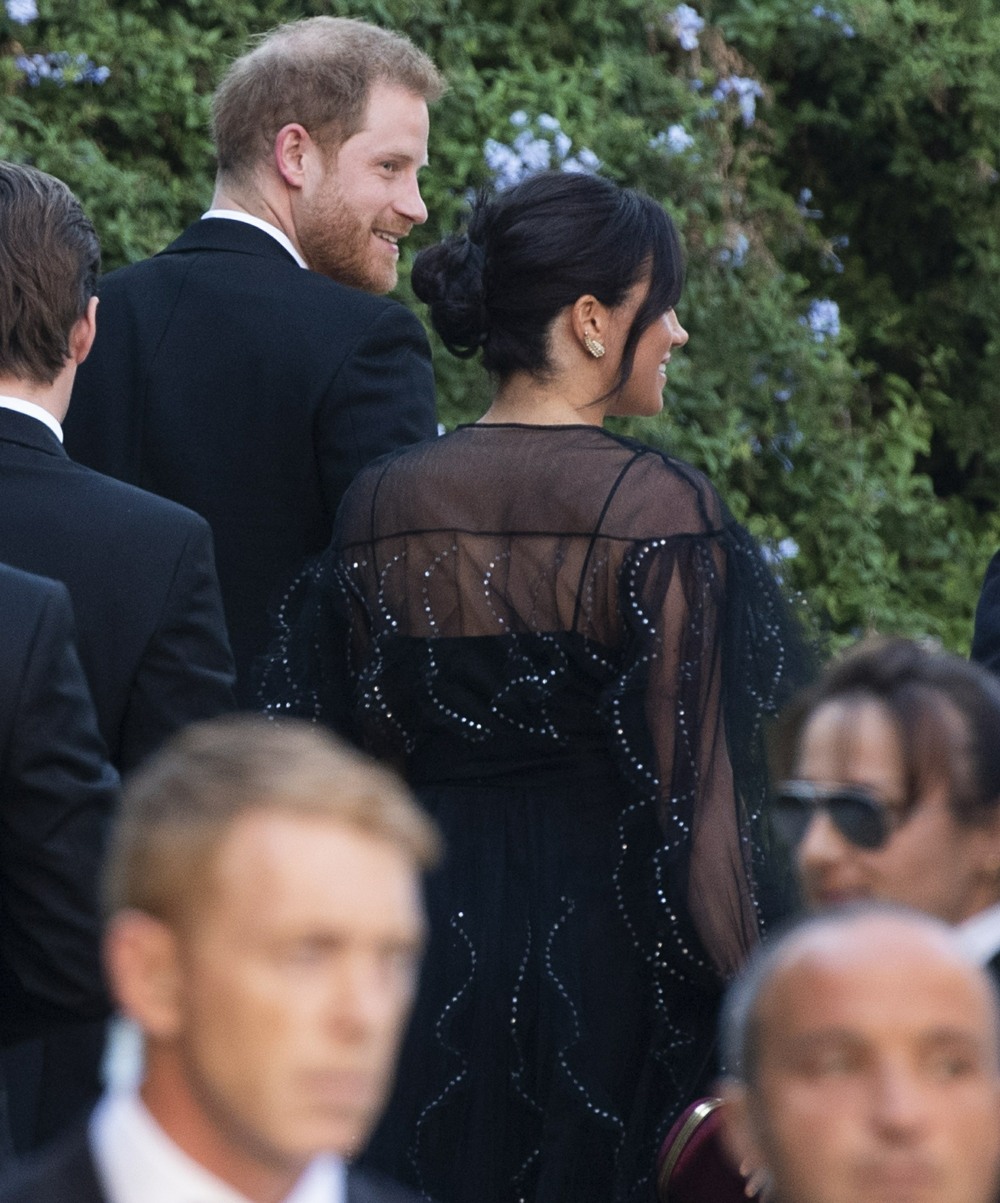 Here are some photos of the Duke and Duchess of Sussex arriving at Misha Nonoo’s wedding in Rome on Friday evening. The wedding was held at Villa Aurelia and from the looks of everything, this whole extravaganza cost an absolute fortune. Misha invited all of her A-list friends and all of the royals she knows: the York princesses were there, as were Karlie Kloss (and Joshua Kushner), James Corden, Katy Perry, Orlando Bloom and… Ivanka Trump and Jared Kushner. What’s weird to me is that the British papers seem to be obsessed with the plane issue (Meghan and Harry took a commercial flight, sources confirm) and the cost of the Sussexes’ hotel suit and the look of Meghan’s dress… and no one is making a big deal out of the fact that Ivanka Trump and the Duchess of Sussex went to the same wedding. It’s mind-blowing.

As for the stuff the papers are obsessed with, Meghan’s dress is Valentino and it’s black and expensive. I don’t care that it’s black – I think it’s fine to wear black to a very fancy black-tie evening wedding. If the wedding was in the morning (and in England), then maybe black would be inappropriate. I also don’t care that it’s expensive! Well, I care that Meghan probably spent thousands of dollars on this dress and from what I can see, it’s an ugly, puffy mess. Here’s a look at the dress as sold:

It’s just not a cute dress, right? It’s too… Hollywood-madam or something. The Daily Mail has a big article about how Meghan and Harry are probably staying in a “£1,200-a-night luxury hotel,” because HOW DARE THEY, you know, have a nice couple of nights in a nice hotel suite at the Hotel Vilon. The DM isn’t even sure that the Sussexes are really staying in the fanciest suite either – and considering that Ivanka Trump is there, I’d hold off on blaming Meghan and Harry for all of the heavy security everywhere around the hotel too. Speaking of… all of this, the Daily Mail’s Eden Confidential column had an interesting/terrible story about what the Queen thinks of all of this Sussex fanciness:

Acerbic author David Starkey is surprisingly sweet on the Duchess of Sussex. The television presenter, who once enjoyed lunch with the Queen, says Meghan has won over the monarch.

‘The Queen likes Meghan,’ he tells me at the Soho launch party for fellow historian Dan Jones’s book, Crusaders. ‘The Queen immediately made her and Harry ambassadors for the Commonwealth, which is the only thing that the Queen really cares about.’

However, Starkey does warn the American former actress: ‘The problem is she has brought too much Hollywood entitlement with her. But her hypocrisy is just the same as any other member of the Hollywood elite: they all proclaim their eco-sensitivity while flying their private jets. But she gets skewered — they, on the whole, don’t. She is the “woke” member of the family.’

The historian also highlighted how Meghan is a breath of fresh air into the monarchy. He said: ‘She’s a royal modernisation in herself because of her mixed race, because of being an American, her absence of any kind of obvious religion, being an actress, all of this would have been unthinkable 20 years ago. Meghan is behaving like a celebrity, but Diana behaved like celebrity. I always said that Diana was a strange phenomenon, she was the daughter of an English earl, but she behaved as though she’d been born in California, which I think may very well be one of the things that attracted Harry to Meghan. He’s married his mother! Lots of insecure boys marry their mothers. Her influence over her husband, one can see he’s very much in his wife’s pocket, so Meghan is playing the dominant wife role very well.’

That’s a lot to unpack, so let’s get into it. One, it’s possible Harry did marry Meghan because he saw something in her that reminded him of Diana. Meghan has a similar energy, similar emotional intelligence (Harry has Diana’s E.Q. too) and similar work ethic and happiness to “perform” those public duties. I don’t think that makes Harry insecure. Certainly not any more or less insecure than William, who has a borderline creepy relationship with his mother-in-law. As for whether the Queen hates Meghan’s “Hollywood entitlement”… I mean, this from a woman who owns a gold piano and multiple castles. The thing is, I’ve never understood why the Queen and her fussy old courtiers have a problem with Meghan’s star power. I’ve said this before, but here we go again: it’s like all of those old bitties are distraught at the idea of someone bringing a touch of glamour to an outdated, archaic and out-of-touch institution. They took issue when Diana brought glamour to the monarchy too.

Prince Harry, The Duke Sussex and Meghan, The Duchess of Sussex, arrive to attend the wedding of fashion designer Misha Nonoo at Villa Aurelia in Rome, Italy
📸 @Reuters https://t.co/KHxF3BjUUh pic.twitter.com/qc9GSj3fTk 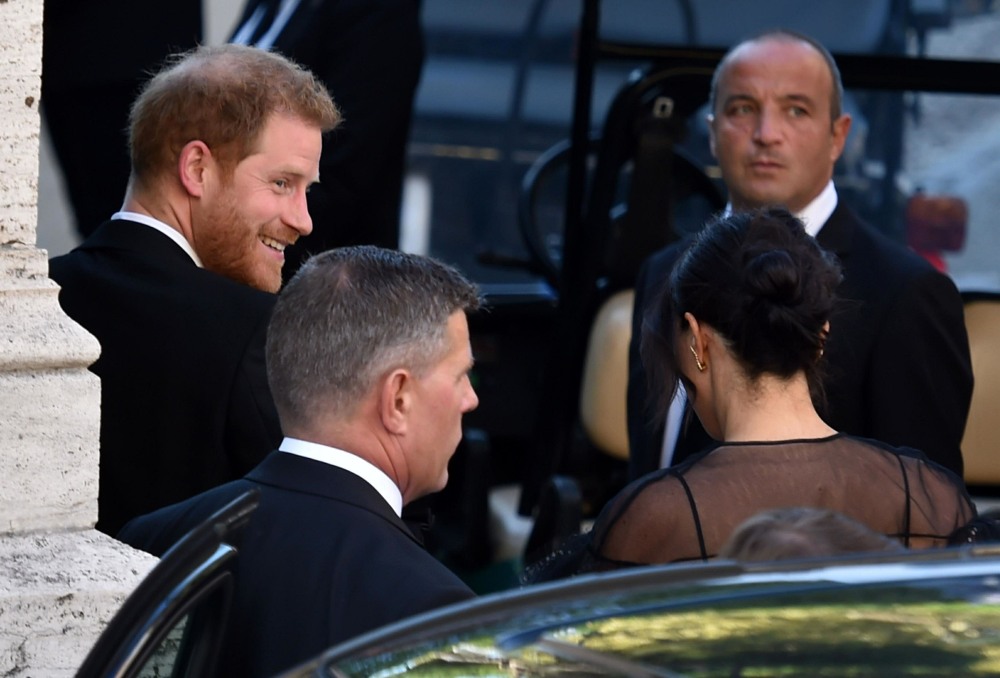 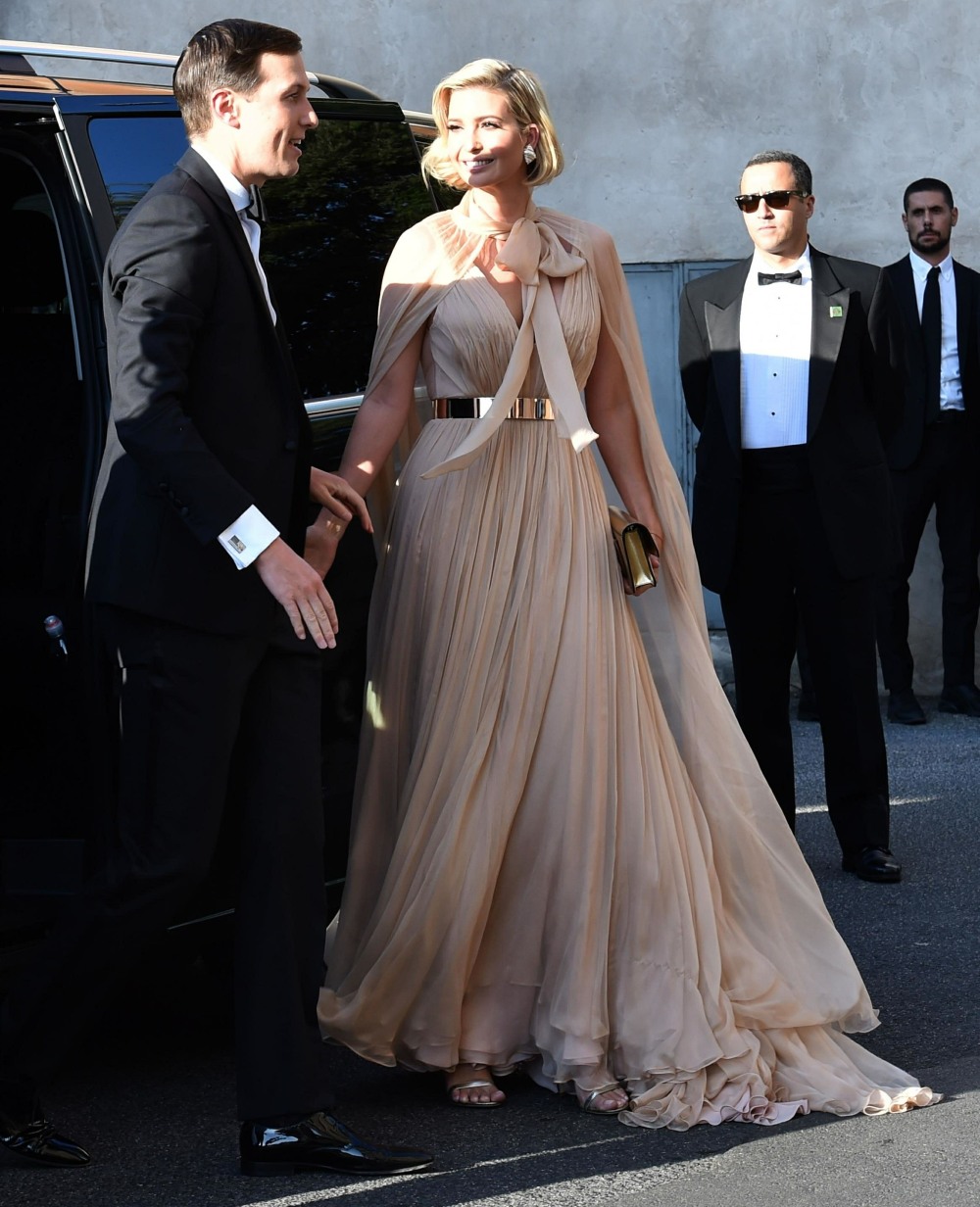