It’s my favorite time of the year: Halloween costume time! I’m covering four big parties this past weekend. First up, we have Demi Lovato’s party at SBE’s Hyde on Saturday. Demi (above) dressed up as Pennywise. Not just any Pennywise, though – a sexy Pennywise. As much as the concept of a sexy Pennywise makes me bark out in laughter, I have to give it to Demi, her look is good. The makeup and hair are fantastic, and the costume actually stays in the realm of the film version’s fluff and flounce, while still showing leg and cleavage. For a sexy clown, she’s done a great job. Also at Demi’s party was Kate Beckinsale in a nice Breakfast at Tiffany’s send up (pictured with Jonathan Voluck as Elton John):

Travis Barker gets credit for staying on theme in creepy clown makeup. Jameela Jamil dressed as a nun and it looks like the costume was pretty good, but I can’t find a shot to confirm that. Also there was Paris Hilton who went as pioneer astronomer Annie Jump Cannon, nailing both period and detail. Just kidding, she went as a basic sexy schoolgirl and wore sunglasses and fingerless gloves because: why bother, right? 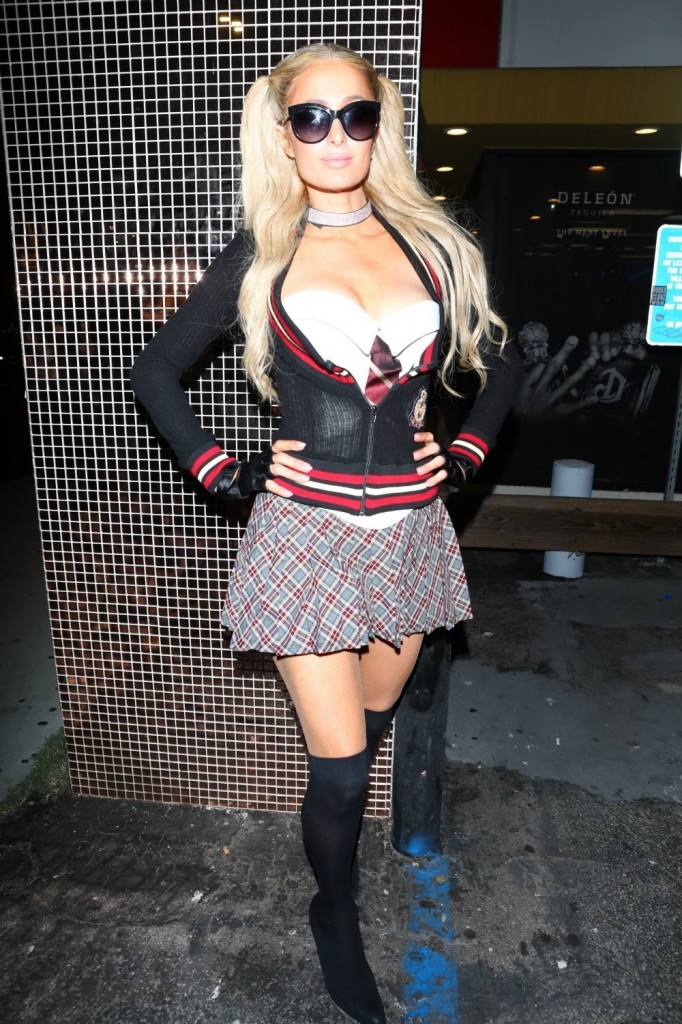 Paris should have been the lead in since her Electrify perfume promo party kicked things off last Thursday. But there weren’t very many notable looks so we led with Demi, who was at Paris’ party too. Paris wore a sexy, sheer warrior ensemble from Trashy Lingerie that she – no joke – cut the skirt off because I guess it was two demure in its original form:

Forgive my historical snobbery but if you feel the need to “sexify” a Marie Antoinette costume, you’ve kind of missed the point. The wig is good, and the bodice is well done, though. And it was a Paris H party so pretty much everyone was dressed as a sexy something. The winner, though, was probably Rich Kids of Beverly Hills’ EJ Johnson, who dressed as Paris Hilton as Boudoir Barbie. Points for creativity. Heidi Klum and new husband Tom Kaulitz were there as well. I guess they went as glitter bombs?

It’s not up to Heidi’s usual standards so I’m hoping it was just a feint to her usual level of halloweenery.

Unicef held a masquerade party at the Kimpton La Peer Hotel on Saturday. Billie Ellish performed. But what her costume was exactly, I don’t know. She wore her usual skater girl look but added a diamond studded, chain mail face mask. I would knock her for phoning it in, but the mouth mask looks incredible when it’s in place: 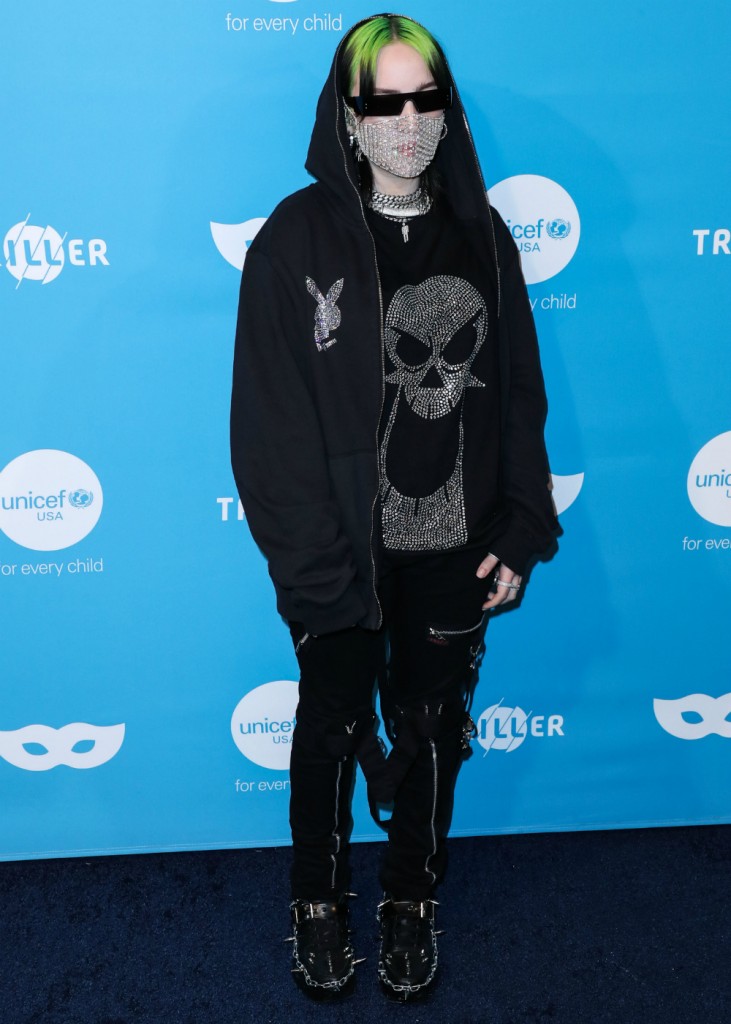 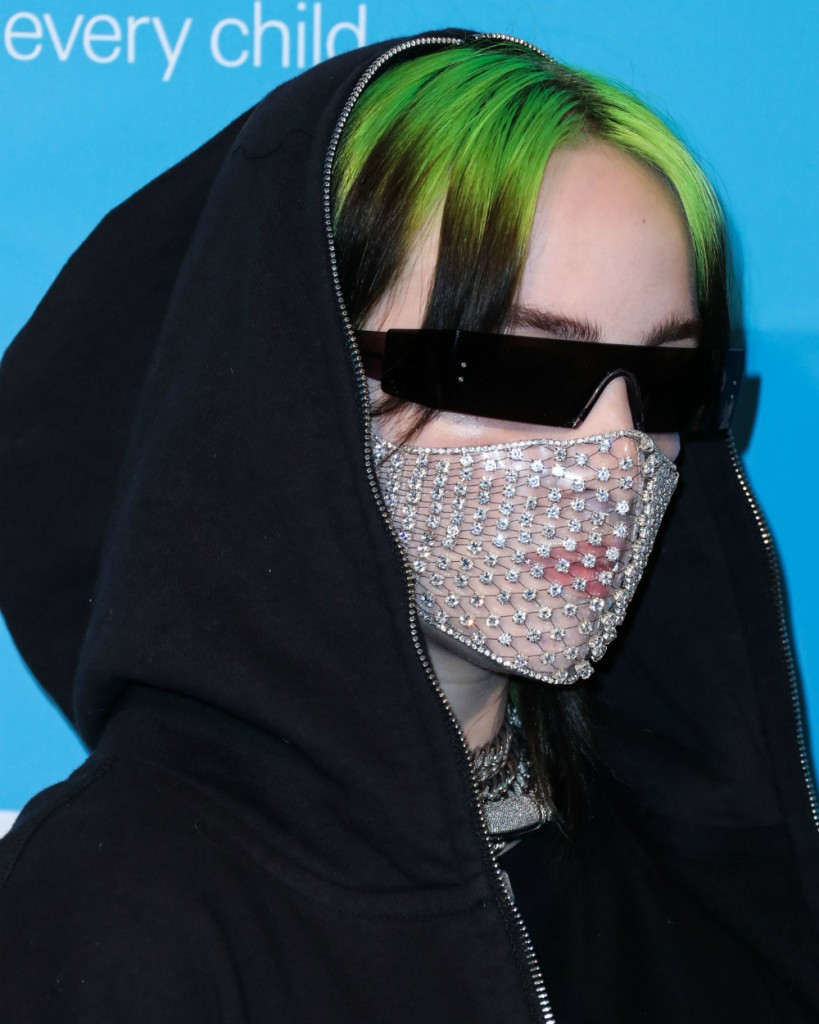 I could have worked wonders around that piece. Avril Lavigne was a silver half skeleton, I guess: 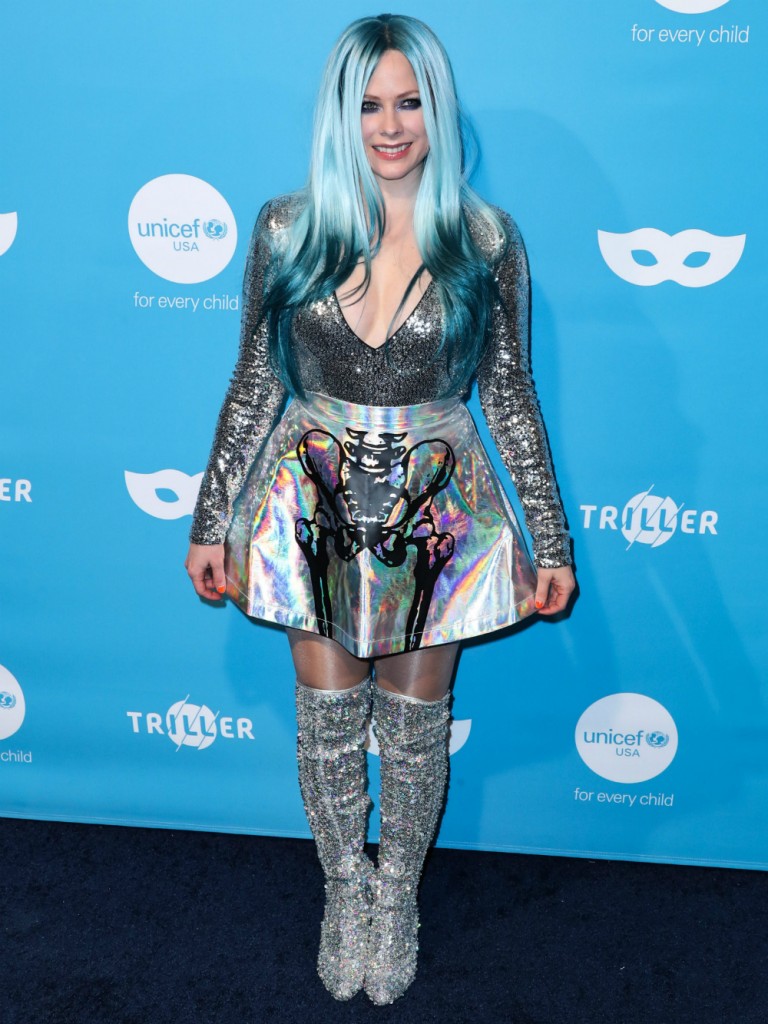 Her blue hair looks great with the silver outfit and the boots are fantastic but I dislike the rest. It was a Masquerade ball and not a costume party so many of those attending stuck to semi-fancy dress and a mask, so not too many pics to show from this one. Nats Getty and Gigi Gorgeous killed it as Jack Skellington and Sally, though: 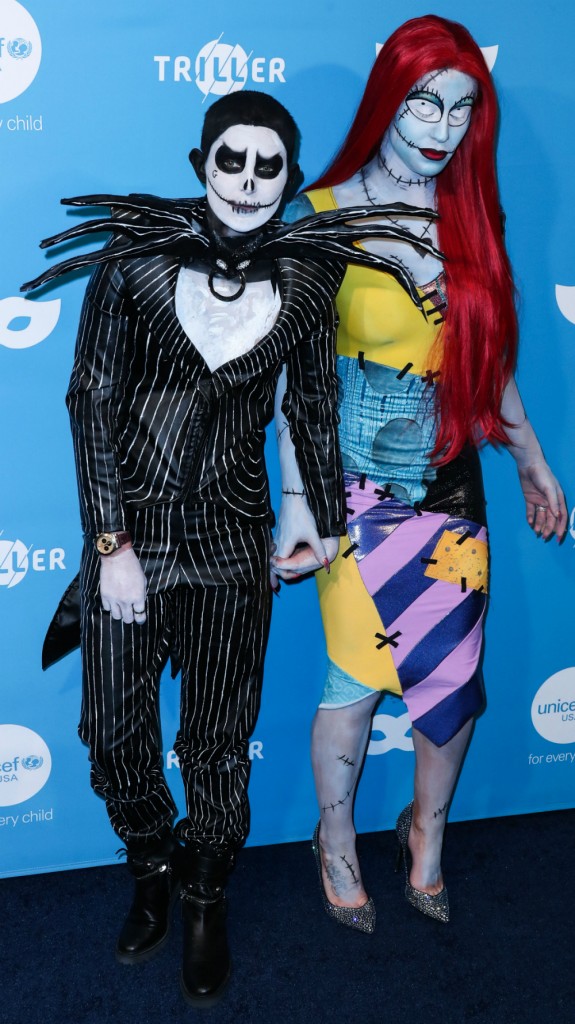 Casamigos had a Psychedelic Spirits Themed Party but barely anyone outside hosts Rande Gerber and Cindy Crawford stuck to theme: 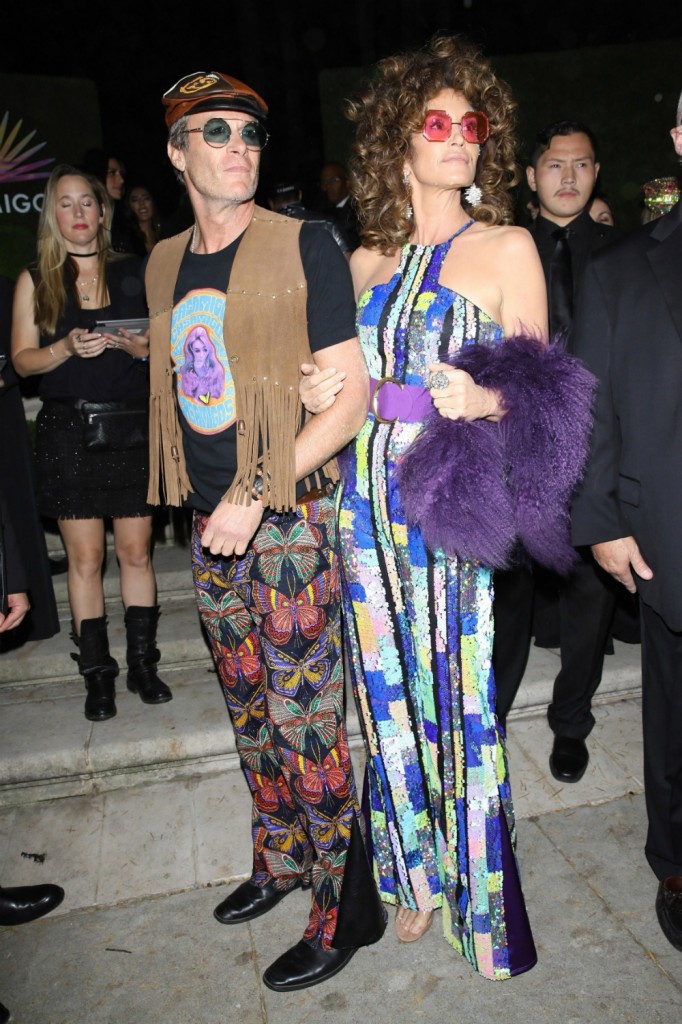 The big story there was Jessica Biel dressed up as N’Sync Justin Timberlake and four friends dressed as the rest of the band while Justin himself dressed as a microphone:

This is what happens when you admit on TV that you don’t know any NSYNC songs and you’re married to @justintimberlake. Well played, husband, well played.

I suppose it was clever, but, well, it’s them. Lisa Rinna dressed as JLo in her infamous Oscars Versace dress: 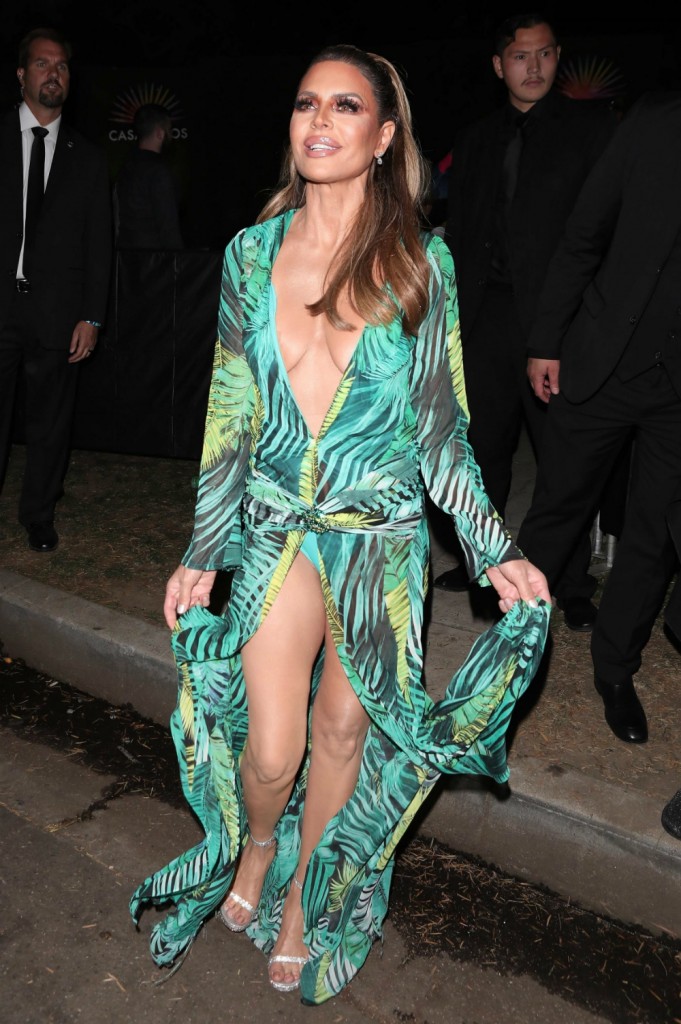 That would have been more impressive if JLo hadn’t already done it during the Versace fashion show.

Oh shoot, I almost forgot, Paris Hilton was there too. As a sexy showgirl. The sad part is this was decent costume and she was styled beautifully but predictably killed any enthusiasm I had for it. 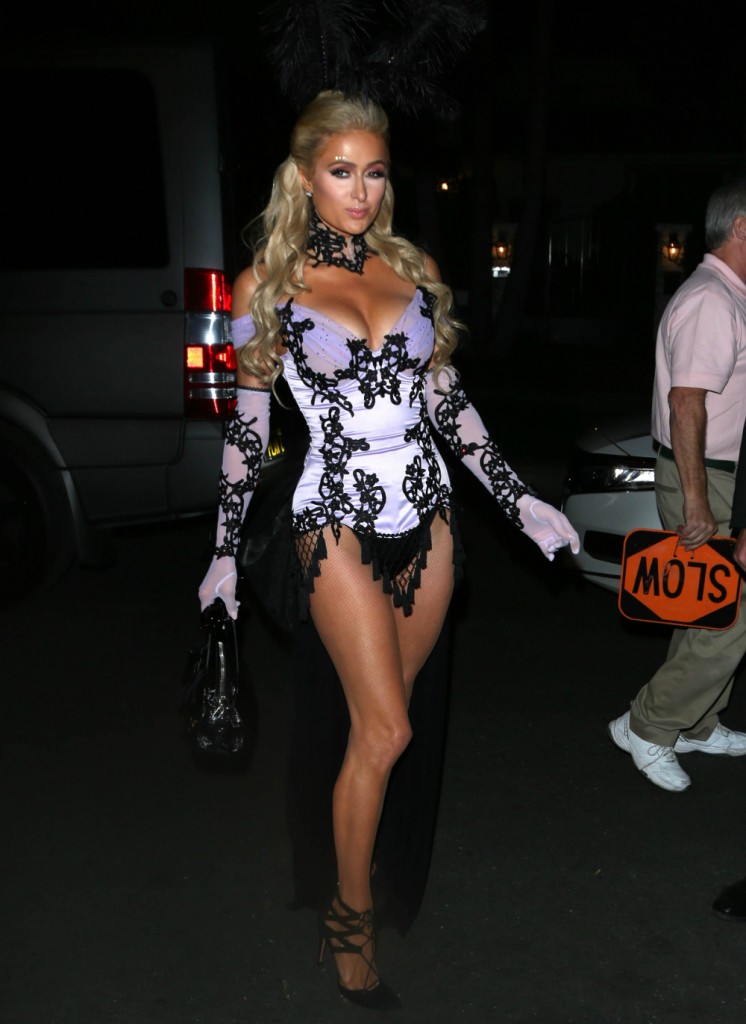