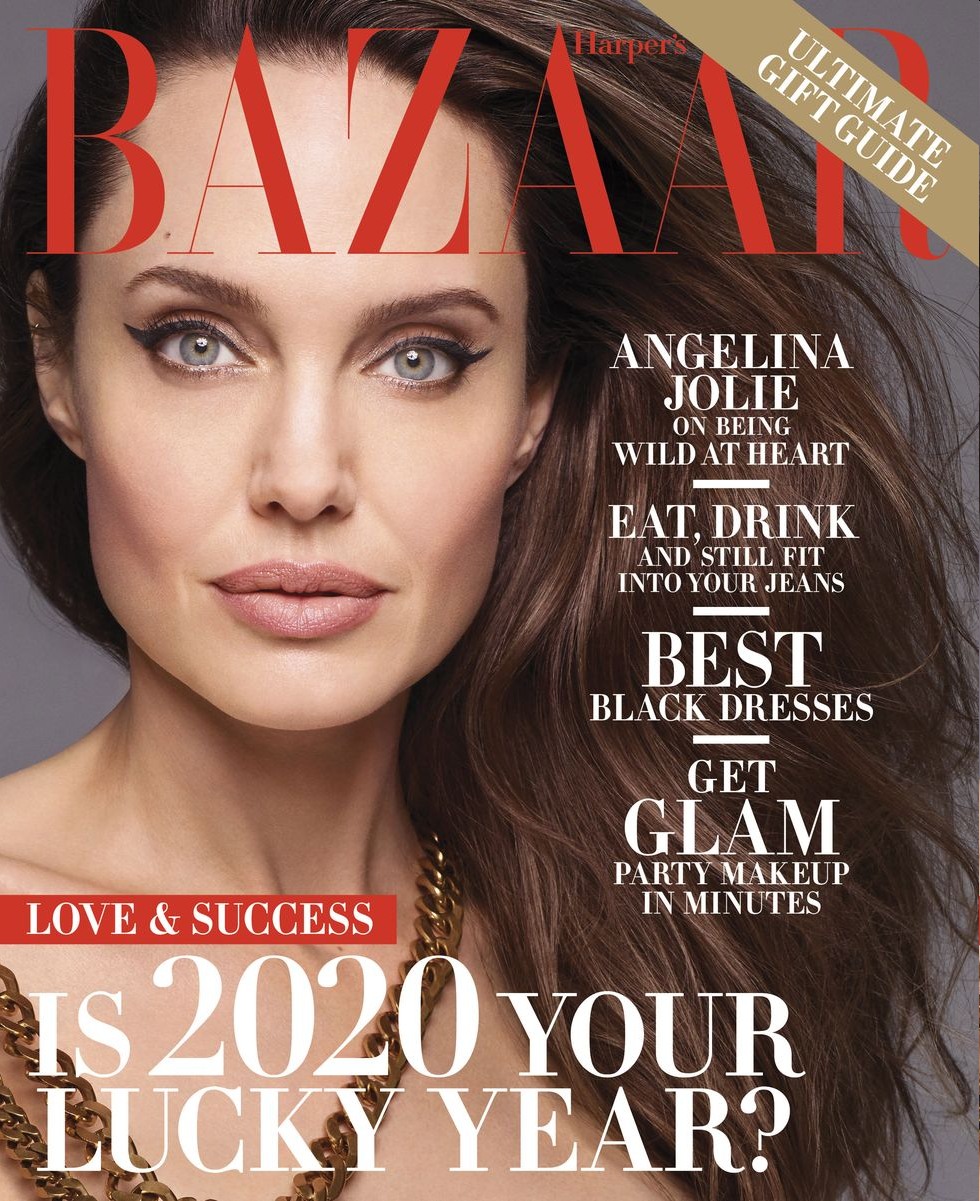 Well, this is a beautiful and pleasant surprise. I thought that Angelina Jolie was done with her promotional stuff for Maleficent: Mistress of Evil, but apparently not! Angelina covers the December/January issue of Harper’s Bazaar US. I feel like it’s been a really long time since she’s done a cover for Bazaar? For the past… say, 15 years, it feels like she saves her major magazine interviews for Vanity Fair and Vogue. But I think VF is still on her sh-tlist, so she went to Bazaar. And the interview isn’t really about Maleficent either – Angelina spends much of the interview highlighting her work with the UNCHR and her other international/humanitarian interests – you can read the piece here. I think Bazaar also just sent her a list of questions and she answered them by email. Some highlights:

She’s back to feeling herself: “My body has been through a lot over the past decade, particularly the past four years, and I have both the visible and invisible scars to show for it. The invisible ones are harder to wrestle with. Life takes many turns. Sometimes you get hurt, you see those you love in pain, and you can’t be as free and open as your spirit desires. It’s not new or old, but I do feel the blood returning to my body… The part of us that is free, wild, open, curious can get shut down by life. By pain or by harm. My children know my true self, and they have helped me to find it again and to embrace it. They have been through a lot. I learn from their strength. As parents, we encourage our kids to embrace all that they are, and all that they know in their hearts to be right, and they look back at us and want the same for us.

The biggest misconception about her: “I have a tattoo, “A prayer for the wild at heart kept in cages.” I got it when I was 20. I was with my mom one evening, and I was feeling lost. I was restless—always. I still am. We were driving to dinner, and she talked about spending time with Tennessee Williams and how much she loved his words. She told me he wrote that, about the wild at heart. We drove to a tattoo parlor, and I got it inked on my left arm. What she did for me that night was to remind me that the wild within me is alright and a part of me. I see so much beauty in other people. Not when they are pretending to be something other than their true selves. Not when they are harming others. Not when they lie. But the wild ones. The emotional, open, searching ones, longing to be free. The honest ones. Because anything else is a cage impossible to live in.

On rebellion: “If nobody ever rebelled, nothing would ever change.”

How she dressed when she was younger: “At school I wasn’t that popular person; I was a punk. I loved leather, PVC, and fishnets. Those were my three favorite fabrics in my early 20s. I remember the first time I wore PVC pants. I was waiting for an audition, sitting in the sun in L.A. By the time it was my turn, my pants had fused together. I didn’t get the part. But I loved those pants. I wore something similar when I married Jonny [Lee Miller].”

Her Cambodian home: “When you have a loud mind, as I do, you go to places that quiet you, and I find that in the desert, or in the jungle in Cambodia. When I first went to Cambodia, I thought people would be hardened by having experienced so much war and suffering. But in fact it was the opposite. I found them to be full of grace and fight and life. It’s a home and a headquarters for my foundation. There were physical challenges, though. We had to clear nearly 50 land mines before we could live there… We got a call the other day informing us that chipmunks have moved into the house. They asked if we should remove them, and Vivienne was very clear that we needed to cover the wires and let them stay. However, the local snakes may have their own opinion on that. The last time I stayed there, I heard screaming down the hall because a friend had found a giant lizard under their pillow. Clearly, the animals are there more than I am and they feel it is their home.

Being limited: “I would love to live abroad and will do so as soon as my children are 18. Right now I’m having to base where their father chooses to live.

There’s so much more in that interview, about how Angelina wants women to start standing up, being bold and fighting for what they believe in. I find it interesting that she’s so blunt about having to base herself in LA because of Brad. I mean, we knew that. But it’s like she has a calendar and she’s counting down the days until Vivienne and Knox turn 18 so she can get the f–k out of LA. Also: I love that Vivienne was, like, the one with knowledge about chipmunks. That’s so f–king cute. And I’ll always love any reference to pleather pants and Jonny Lee Miller. *sigh* I’m going to re-read this interview a few times. 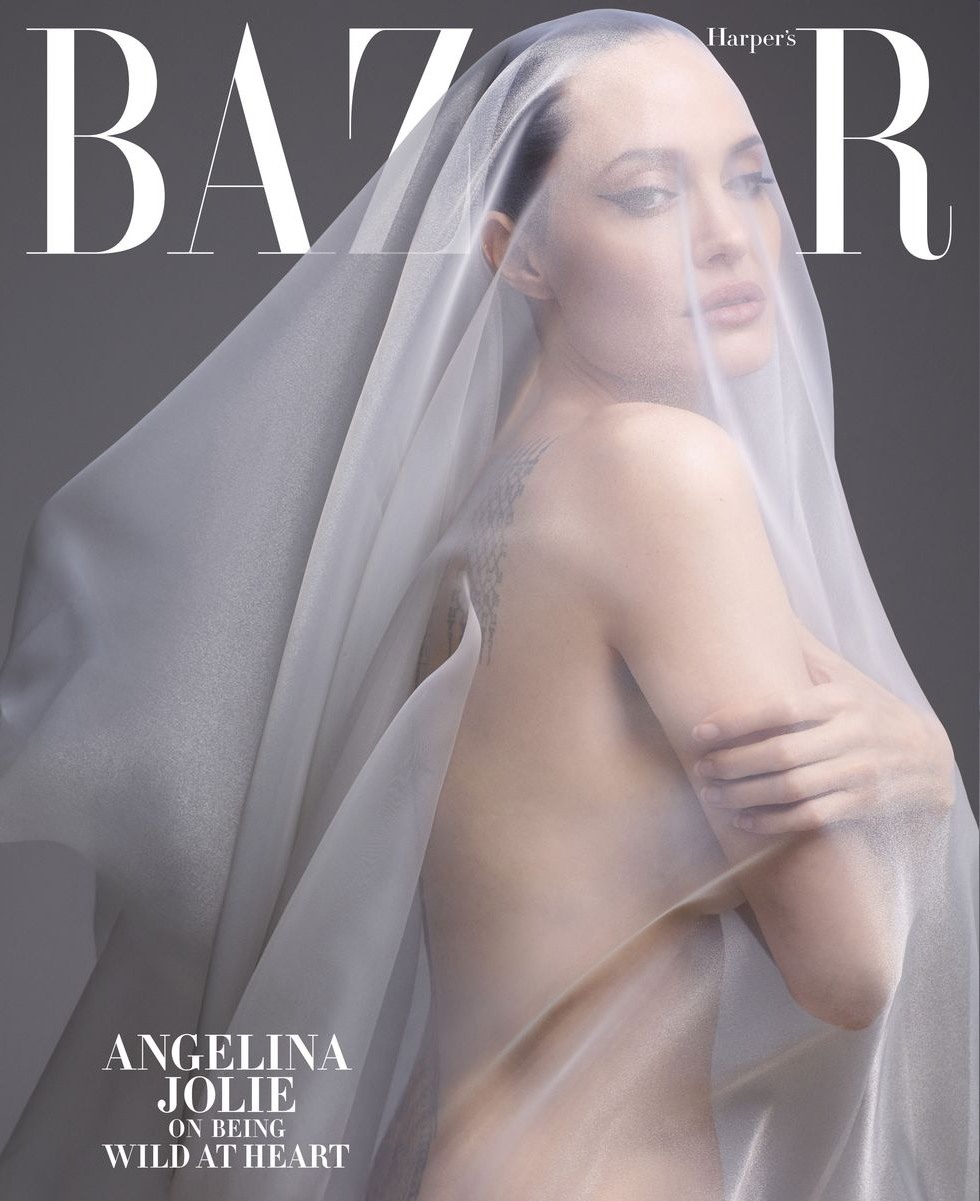 “Labeling people and putting them into boxes isn’t freedom. Difference and diversity are what I value most—in my family and in others. I don’t want to live in a world where everyone is the same, and I imagine that’s true for everyone reading this. I want to meet people I’ve never met before and learn things I don’t know. The challenge today is to embrace our differences. And not to be fooled by efforts to divide us or make us fear others. We’re seeing a retreat of values worldwide.” #AngelinaJolie opens up in our December 2019/January 2020 issue. Tap the link in our bio to read now. Photography by @solvesundsbostudio Styling by @patrickmackieinsta Hair by #malcomedwards Makeup by @thevalgarland Manicure by @chisatochee