Charlize Theron: ‘Why do we let these very egocentric men run our lives?’ 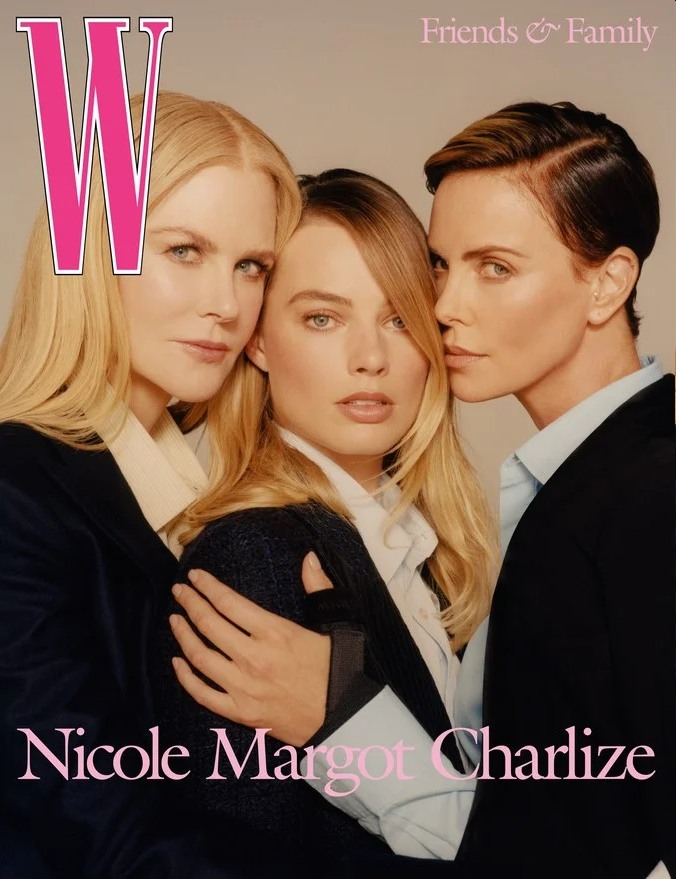 The ladies of Bombshell cover the latest issue of W Magazine. Nicole Kidman, Margot Robbie and Charlize Theron seem to have gotten along well with this project. Not Big Little Lies “friends for life!” vibes, but I think they all like and respect each other a lot. Charlize stepped in as producer on Bombshell at the last minute, and I feel like she’s more “front and center” for the promotion too. I wonder if she’s the one who will get more “Oscar buzz” for playing Megyn Kelly (and looking so much like Megyn). Charlize is the one who is quoted the most in this interview too – go here to read W’s cover story. Some highlights:

Charlize on Megyn Kelly: “Like most people, I first noticed Megyn at the Republican debates. I loved when Megyn took it to Trump. I admired her sharpness, her wit. She was fearless. But when my production company received the script for Bombshell, I was conflicted about playing her. I personally felt uncomfortable with some of the stuff that she’s said. But ultimately, I understood her strength and ambition. Megyn herself says, ‘I know I’m tough’—and that’s something I’ve heard about myself. People told Megyn she had sharp elbows, that she was hard. I’ve had people judge me and say the same things about me.”

Charlize on how so many Fox News women felt Roger Ailes was their mentor: “Ailes was very good at his job. And he was also a mentor to many women at Fox, including Megyn. For women to be betrayed in their workplace by a mentor who is going to make your career possible is very confusing. The water is murky. I love the nuance of that in our film: We don’t tell the story of the perfect victims of Fox. We try to tell the story of the messy, emotional dynamics between boss and employee. In Bombshell, our monsters don’t always look like monsters, which is how it is in real life.”

Nicole on Gretchen Carlson: “I liked that our story is a study of how women relate to a toxic environment. We want to tell complicated stories about women, and that’s very difficult. The world likes clear-cut winners and losers, abusers and victims, but reality is not that simple. It’s always a little dangerous to give a predator like Ailes any measure of humanity, but to get at the problem of harassment, you have to understand how someone like Ailes manipulated these women. And I must say, I liked putting on the Gretchen dresses. It was like wearing a suit of armor. I’m allowed to like hot pink!”

Charlize on malignant men: “I want to hate Roger Ailes but, as with all interesting and intense people, his personality is much harder to navigate. His need for power became a kind of malignancy that the women had to overcome. Ailes wanted blind loyalty, and the first ones to say no were Carlson and Kelly. In playing Kelly, I kept thinking, Why do we let these very egocentric men run our lives? This film is, hopefully, like taking medicine: It doesn’t answer every question, and it isn’t the cure, but hopefully it does speed the process of change.”

“Why do we let these very egocentric men run our lives?” Because from a very young age, girls are taught how to navigate and negotiate through the world and those egocentric men run the world, so our lives end up being run by those men. It is super-depressing. Even though Charlize seems to be both-sides-ing Roger Ailes, I have faith that Bombshell will be a more accurate and feminist telling of what happened at Fox News in 2016/17, especially when compared to that nightmarish Russell Crowe miniseries.

48 Responses to “Charlize Theron: ‘Why do we let these very egocentric men run our lives?’”