Kim Kardashian: ‘I hope to have an amazing relationship with the next president’ 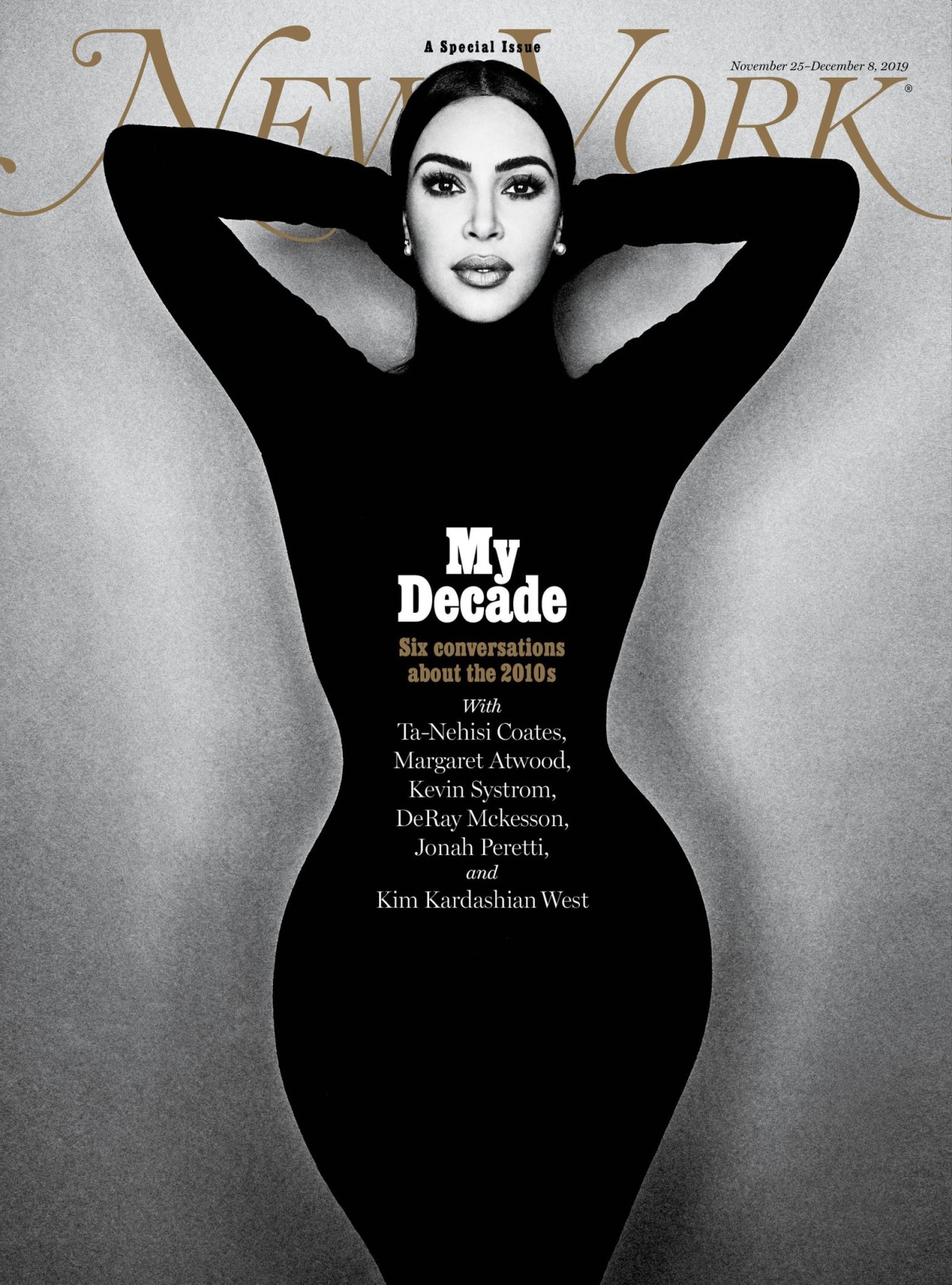 I’m not actually looking forward to the End-of-Decade listicles coming up in the next four weeks. I don’t want to really examine where we are at the end of this decade because it feels like everything is on fire and everything is just THE WORST. New York Magazine’s current cover story is a series of interviews with various people about how they’re assessing the 2010s. Kim Kardashian was one of the people selected. Would we say that the 2010s were important for the Kardashians, and for Kim in particular? Sure, I guess. She went from catfaced reality star to… Kanye West’s wife, mother of four and still a reality star. In the interview, Kim chatted about politics, sex symbols and more. You can read the full piece here. Some highlights:

How she feels about being a sex symbol: “It can be complicated. I definitely see the things that I brought on myself, the biggest being the robbery. Just being flashy and oversharing my every move on social media. But I enjoy my life. Someone said to me the other day, ‘What is it like being you?’ It’s awesome.”

On why she’s been dressing a little less sexy lately: “I have kind of had this awakening myself. I realized I could not even scroll through Instagram in front of my kids without full nudity coming up on my feed pretty much all the time. And I definitely contributed to that. I mean, one of my most iconic covers was the Paper magazine one, when I was all oiled up and ripping my dress off. I also did think, like, Okay, I’m here in the White House and then the next day I was posting, like, a crazy bikini selfie. And I was thinking, I hope they don’t see this. I have to go back there next week.”

On why she doesn’t feel pressure to keep up anymore: “I think I’m evolving to where I don’t feel the need to want to keep up. Not that I did it to feel like I had to keep up, but I guess I just don’t care as much anymore to want to take tons of photos in a thong bikini. I actually just want to lay out. I don’t care to take the time out of my day on vacation like I used to, where I’d pull up to the house and I’d see, This is a setup, this is an Instagram pic. Now this is a different setup. Oh, this place has so many different setups. This is going to be amazing. And now I’m just like, ‘Let’s actually live in real time and enjoy it. If we happen to get a photo, great.’”

On how her relationship with Kanye has evolved: “The one consistent thing is our relationship has never stopped being fun. And it’s okay to not understand each other. It’s okay to not have the same exact feelings all the time. It’s just about figuring out how do we grow from that? or what’s the lesson from that? and giving each other space and time to figure that out.”

Being a mother of four African-American kids: “It definitely has a lot to do with [my political activism]. I want my children to have a fair life. And I do believe that race does play a huge role in the criminal-justice system, if you look at all the numbers. Statistically, one in three black men will be locked up in their lifetime. So that does weigh heavy on my heart. I had many conversations with my dad growing up about being an attorney and what’s fair and what’s not, and maybe I was really sheltered, but I didn’t know all of this was going on. I never had a close connection to someone who had been in prison — to understand how they treat you there and what really goes on. I don’t know if that’s being naïve, if that’s how I grew up. I don’t know.

Going to the White House: “When I have visited the White House, if I feel like something isn’t fair, I’ll say something, maybe privately. And if I can plant a seed, great. Everyone was so worried about me, about my reputation, going to the White House, and it was like, A life or my reputation? I don’t care who it is. I’m just glad someone is listening and making a change. I hope to have an amazing relationship with the next president. I hope to still have a voice for people on the inside, who do not care at all who signs their commutation paper.”

On why getting robbed inspired her decision to go to law school: “I truly think once I got robbed it took something out of me in the best way. All the things that really mattered to me then deeply — how many bags I had, what car I drove … I still like all that stuff, but it doesn’t matter. It could go away. For so long, people have tried to partner me with things. But this was the first thing where I thought, You know what? I want to go to law school. I want to help people. Let me work for the next ten years and build up my brands, and then one day, in ten years, just give up being Kim K. and become a lawyer. And now I’ve come to a realization about what I care about. No publicist would have ever told me to get into prison reform. It was always like, Get into Operation This and Children That.”

“I’m here in the White House and then the next day I was posting, like, a crazy bikini selfie. And I was thinking, I hope they don’t see this…” Is she really that naive? The reason WHY she’s allowed in the Trump White House is because she posts those bikini selfies. If Trump didn’t see her as a famous piece of ass, she wouldn’t get through the door. As for phasing out all of the Insta-lyfe crap… I mean, it’s called “growing up” too. Yes, I’ve always believed the robbery changed her in a big way. But I also think she’s 39 years old now. A little long in the tooth to still be clinging to bikini selfies for relevance. Also: she no longer feels the need to “keep up”? Change the name of the show to Maintaining with the Kardashians.

My new staple fragrance is my @kkwfragrance DIAMONDS 💎 COLLECTION collab I did with my sisters ! Each one of our diamond fragrances smells so amazing! Be sure and check it out at KKWFRAGRANCE.COM

62 Responses to “Kim Kardashian: ‘I hope to have an amazing relationship with the next president’”