Normani covers Cosmo, wonders ‘why does pop music have to be so white?’ 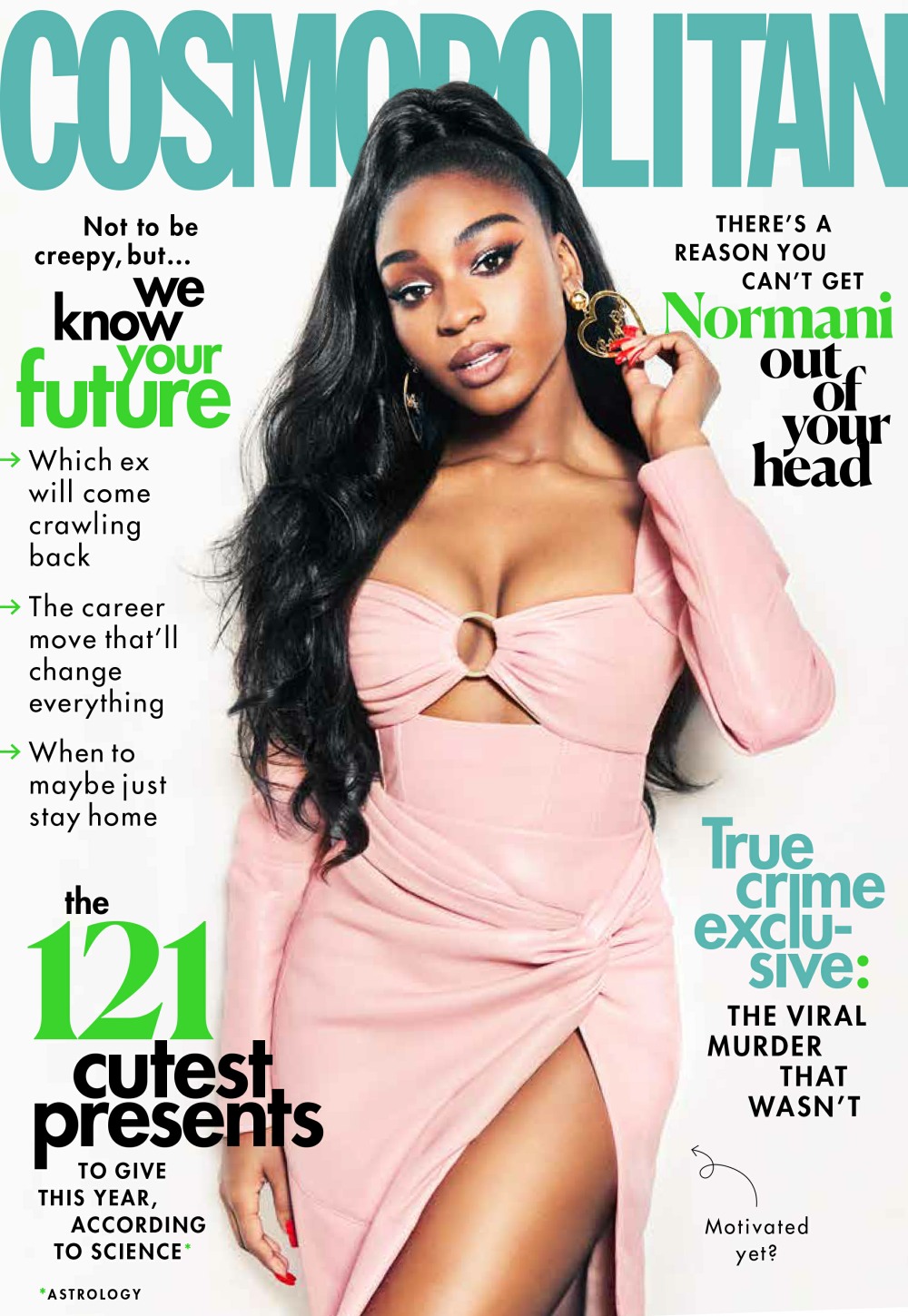 Normani covers the December/January (“Decembuary”) issue of Cosmopolitan. For us older folks who are like “what’s a Normani,” she was in Fifth Harmony into that girl group collapsed under the weight of their own melodrama, and only Normani and Camila Cabello really survived as solo artists so far. Normani had a big series of breakthroughs over the past, what? Eighteen months or so. There were collabs with Khalid and Sam Smith, both of which were enormously successful. And then there was her hit song and huge music video for “Motivation.” She seems to be modeling herself on post-Destiny’s Child Beyonce, which… makes perfect sense, honestly. Anyway, Normani chats with Cosmo about being a black artist in music today, leaving Fifth Harmony and more. You can read the full piece here. Some highlights:

Being afraid of the solo spotlight when she was younger: “I remember always being asked, ‘Why do you wanna be in a girl group? So you can hide?’ And that’s exactly what I was trying to do.”

On realizing she was enough: “I’m not sure what that turning point was, but I was like, Normani is enough. You can be onstage and perform and you can be enough.”

On her hit “Motivation” music video: “I told the director, ‘I want this to be as black as possible.’ I was like, let’s show black culture. Why does pop music have to be so white? Why don’t we make it a little bit more me?”

On making mistakes: “There are a lot of moments where I feel like I have no room to make mistakes. I could fall down a million times, but that is not enough for me, ever. I’m gonna get back up.”

On her art: “Those women before me, I wanna finish what they started… I’m gonna make whatever I do black. You’ll know that I’m a black girl, even if it’s on the quote unquote whitest record ever.”

She micromanages things: “I know how to work really hard, harder than everybody else. If they’re putting in five hours, I’m putting in eight.”

According to her, Beyoncé and Jay-Z have stanned off the record: “The specifics of it I like to keep to myself because it’s just so special. But Bey and Jay-Z have definitely been vocal about how much they want me to win.”

The first rule of Bey-Z is that you do not talk about Bey-Z unless you are authorized. The second rule of Bey-Z is that no one is authorized to speak about Bey-Z. I might buy that Beyonce said some encouraging words to Normani at some point – I mean, “Motivation” is so Beyonce-esque, it would be hard to avoid commenting entirely – but if Beyonce wanted to stan someone on the record, she would do it. Don’t brag about something said in private! Also: Cosmo added some interesting Snake shade in this piece, and I don’t know if it came from Normani or if someone at Cosmo thought it needed to be said. Here’s how it was written: “Normani started planning what she felt had to be done: injecting some sorely needed fun into today’s messy music landscape of singles that are buzzy because of ‘hidden’ messages about exes.” RUH ROH. 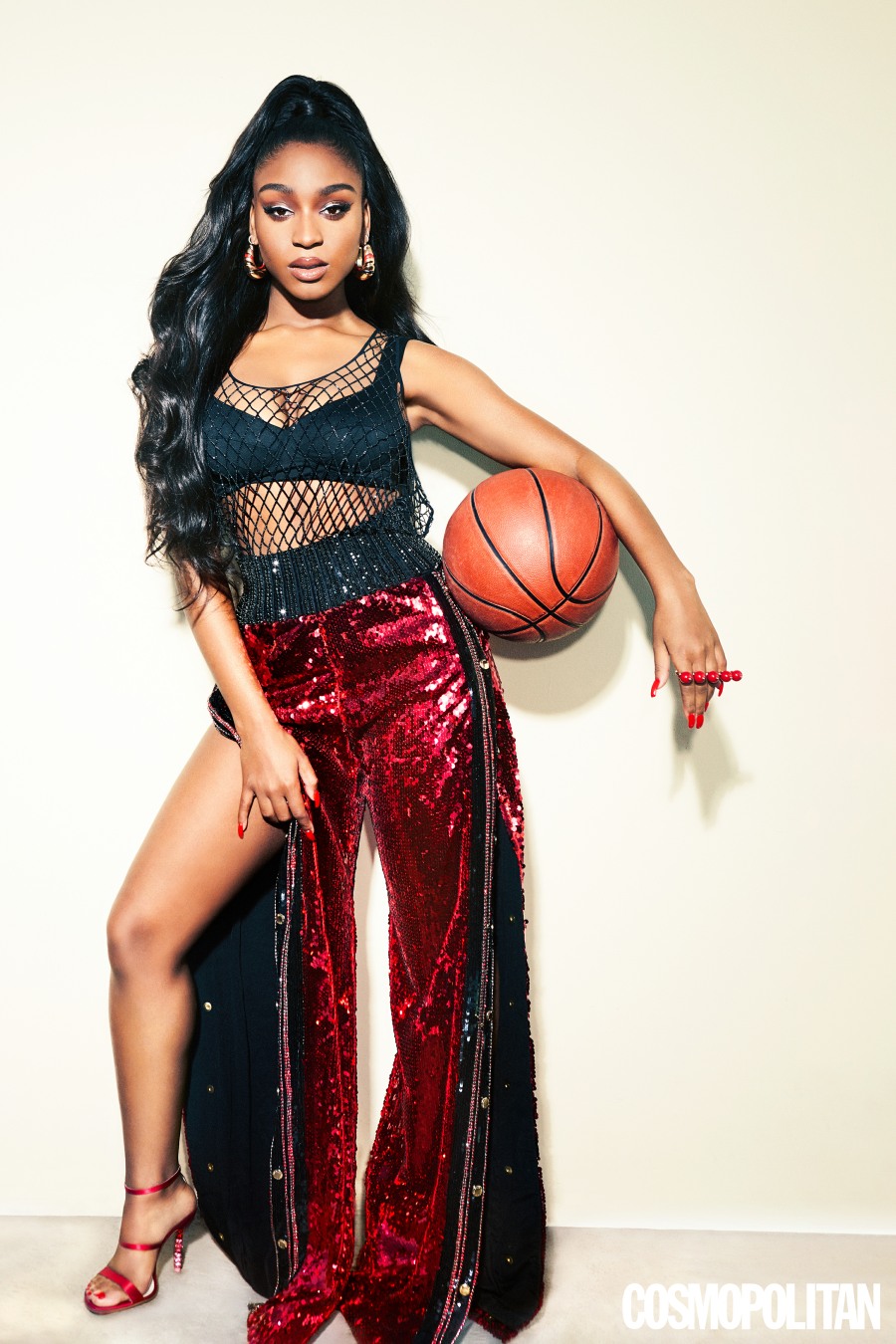 14 Responses to “Normani covers Cosmo, wonders ‘why does pop music have to be so white?’”