Who would you rather, Chris Evans or Chris Evans’ ‘Knives Out’ sweaters? 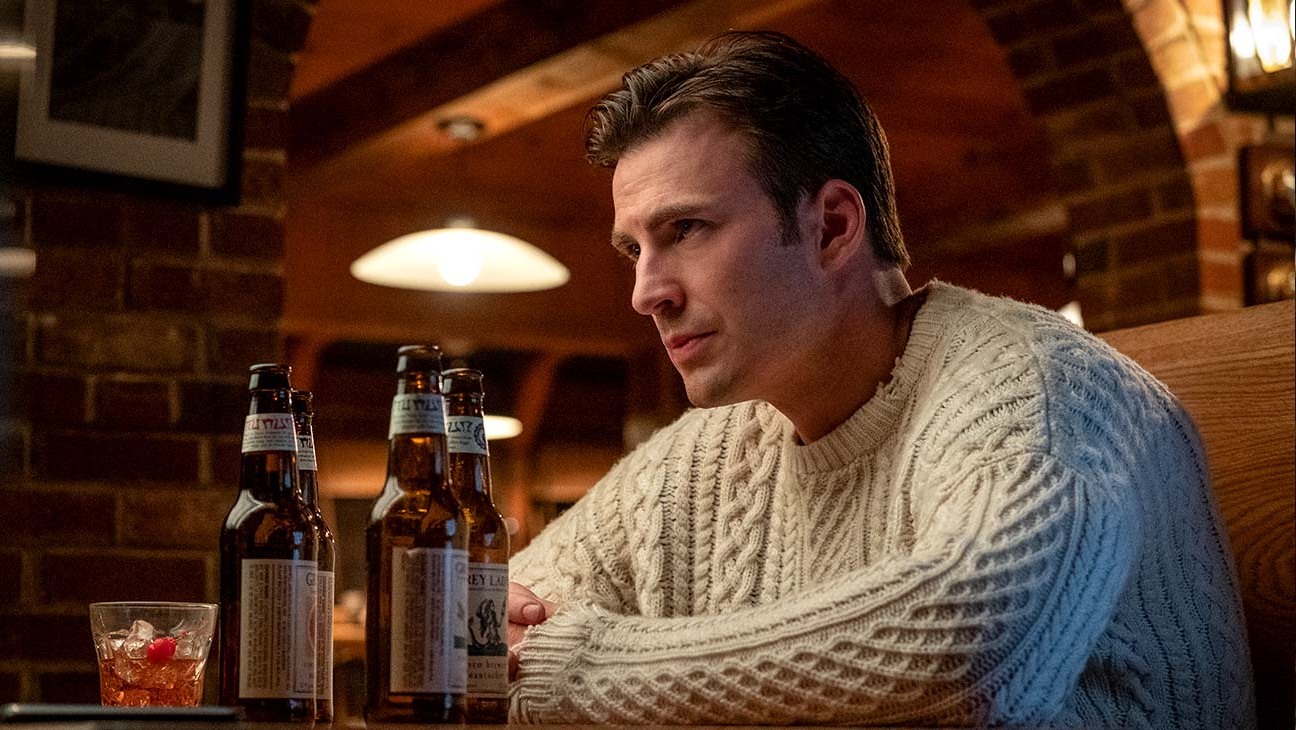 Usually, this is the time of the year when I’m trying to see as many of the Oscar-bait films as possible. But I gave myself a little treat and went to see Knives Out over the Thanksgiving holiday, because it felt like it was made just for me and other Agatha Christie fans. That’s what the film was – a classic murder mystery about a rich family with secrets. Instead of Miss Marple or Hercule Poirot, we got Daniel Craig with a strained Southern accent as a “gentleman sleuth” or something. Anyway, I did enjoy it – that’s my spoiler-free review. If you love a Christie adaptation, you’ll enjoy Knives Out. The film was written and directed by Rian Johnson, and you could really tell that he loves the whole murder-mystery/sleuth genre too.

What was great about the film is that it really felt autumnal/wintery and New England-y too, there was some vintage flare while still remaining true to modern times. The best part was obviously seeing how rich people dress, and of course, Chris Evans’ sweaters have already been making headlines for a week now. Chris’s character is named Ransom and (no spoilers) he’s a wealthy trust-fund type who lives a life of leisure. He’s the “playboy.” But he’s not dressed up like an LA bro – no, he wears beautiful sweaters and great coats and he just looks like money. The Hollywood Reporter did an interview with the costume designer, Jenny Eagen, about the sweaters.

“I’m not sure if it’s the sweater or who’s wearing the sweater,” jokes Knives Out costume designer Jenny Eagan to The Hollywood Reporter. “That might be part of it, too. He looks pretty great.” She and Evans chose the Aran cable-knit sweater during a fitting so rushed that she doesn’t know the brand, just that it worked perfectly for his character Ransom, the spoiled grandson of acclaimed book author Harlan (Christopher Plummer), to convey his privilege and wealth. For Ransom specifically, director Rian Johnson wanted him to be “this eccentric spoiled boy,” Eagan says. “He’d grown up privileged and used his money to buy fancy cars, to buy fancy clothes, but you could tell that he didn’t necessarily appreciate those things.” She liked the white hue not only because “it was a beautiful color with his eyes,” but also because “wealthy people can always wear white — nothing ever gets dirty.”

Eagan decided to add some holes and rips to Evans’ sweaters (he wears a pale blue one in a later scene) to show Ransom’s nonchalant attitude. “He just didn’t care…. I imagine it laying on the chair in his bedroom and he just threw it on day after day,” she says. “But giving it little nicks or little holes here and there, meaning he didn’t take care of it…the holes and the tatter gave him a touch of that disrespect. It was a disrespect to the family, a disrespect to the name, a disrespect to his clothes.”

During the process of creating the rips, Eagan would put on the sweater and imagine where she would pull at it if it was too tight. She envisioned the character negligently throwing it into the washing machine and dryer, shrinking it and then stretching it back out. She used tools like a Dremel or sandpaper to create the tears: “I don’t get scared. I just go for it. Sometimes it feels natural, like the neck. You always know if it’s made of knit, if you break a thread, it unravels.”

As spectacular as the sweater is, the other elements of Evans’ wardrobe convey Ransom’s overall arrogance: “There’s a little bit of that attitude. He’s better than everybody. He spends all of his money, but he doesn’t have to fit a mold and be classic East Coast prep boy. It’s a little bit of an edge.” Take, for example, his classic dark Ray-Ban sunglasses worn in the Boston cold. “They just read pretentious to a certain degree, but not over-the-top. He’s making a statement; he’s always trying to make a statement. He draws attention to himself whether it be the car, the expensive coat, the expensive sunglasses,” Eagan says.

Eagan bought most of the costume options at places ranging from Barneys to boutiques in Los Angeles, Boston and New York, before working with the actors in the fitting room to select the final outfits. “That’s where [what] we call the magic happens,” Eagan says. “You’re like, ‘Wow this is perfect.’ And that was kind of how Chris’ whole fitting was. Everything went on and it’s like, ‘Well this is fast. OK great.’ Because he just fits in clothes so well. Also it depends on the attitude they come in with. If they’re really into it and they’ve thought about it a lot, it’s very quick for them because they get it. They gravitate to it.”

She says that was especially the case with Evans’ tan cashmere coat from New York brand Theory. “He put it on and it was like, ‘Wow,’” she says. “He was like ‘This is comfortable.’… It just felt like a second skin to him.” They had multiples of the coat (since two dogs jump on it and get it dirty onscreen), so Evans might have taken one home as a souvenir. “I do think he took one, if I had to guess,” Eagan says. “I do remember him asking and I remember saying, ‘You have to ask the powers that be.’ But I do think he did take one of those.”

I hope to God that Chris took the cream cable-knit sweater too, because good lord, he looked good in that. Some would argue that all men just look better in winter clothes, and maybe there’s something to that. But these days, it just feels like too few men are actually wearing those thick cable-knit Aran sweaters and they really SHOULD. We should tell men “you’ll look like Chris Evans if you wear this sweater.” Maybe they’ll do it. I’ll also say this: I think Chris was perfectly cast here. When he finally arrives in the story, you’re like “whoa, a MOVIE STAR.” That’s what it feels like. And the costumes definitely add to that. 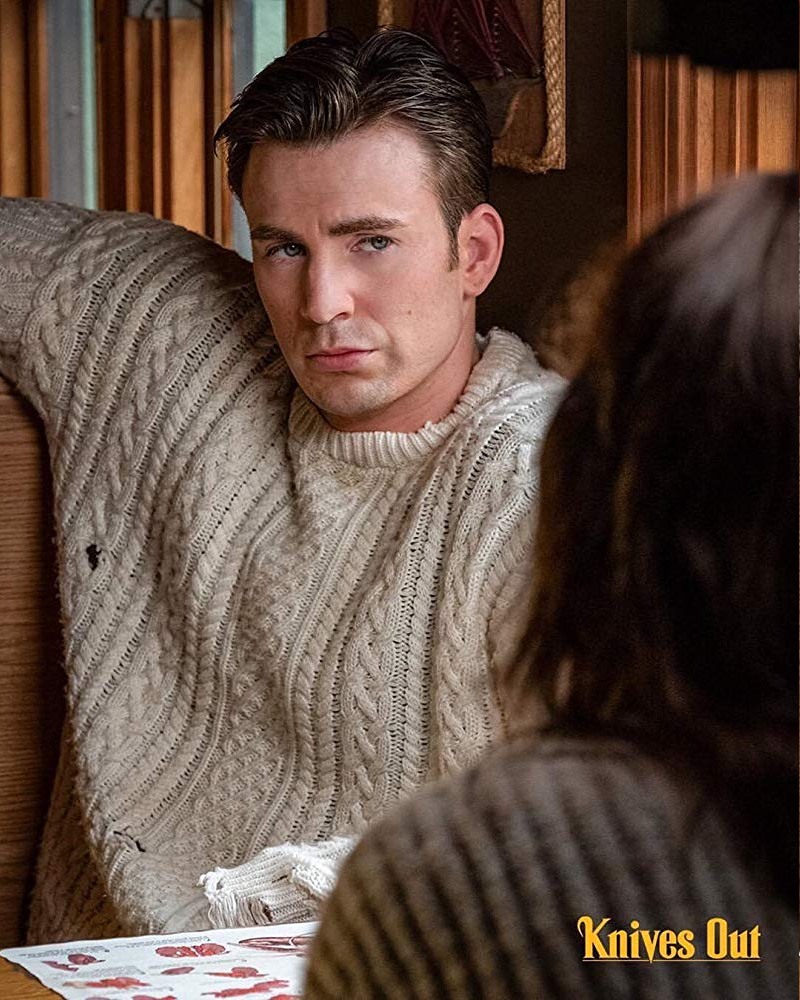 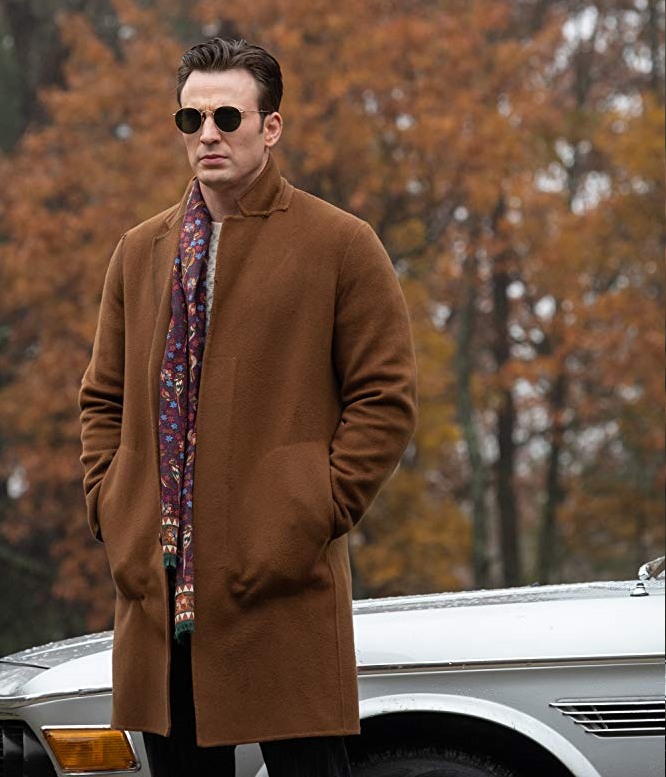 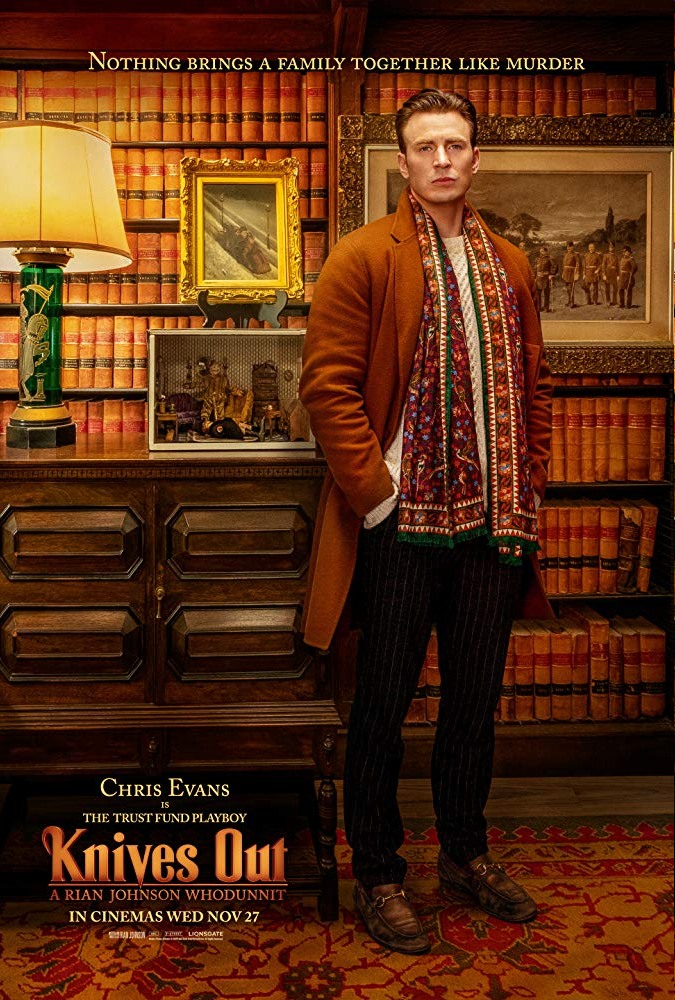 Production stills courtesy of ‘Knives Out.’

60 Responses to “Who would you rather, Chris Evans or Chris Evans’ ‘Knives Out’ sweaters?”