Daisy Ridley covers British GQ: “I now have an issue with the word ‘tomboy’” 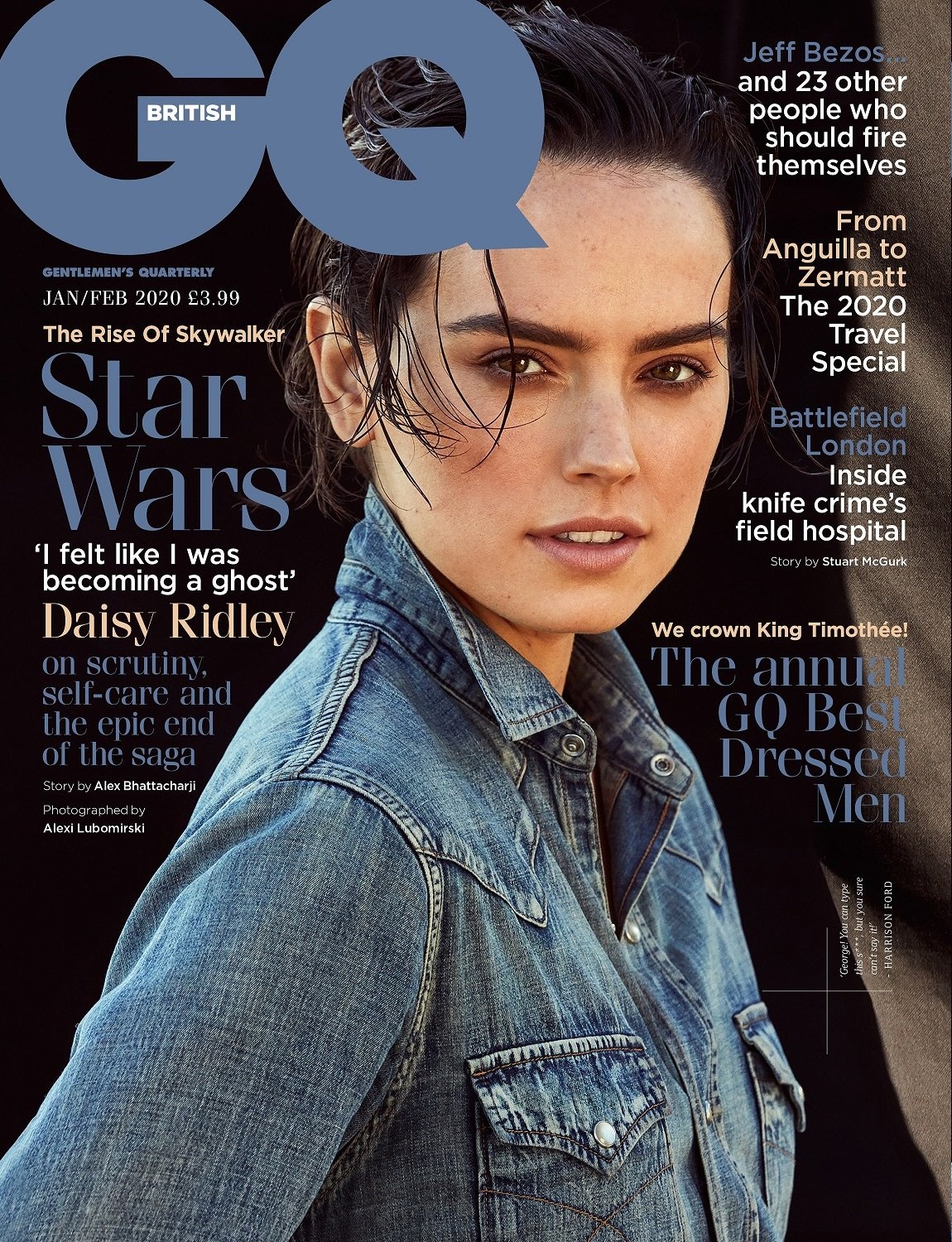 Daisy Ridley covers the latest issue of British GQ. While she is pantless in at least one of the photos, GQ kept it mostly wholesome, which I appreciate. I like Daisy a lot and I wouldn’t buy it if she was suddenly looking like a sexpot vixen in a men’s magazine. She was able to stay-on brand, in the editorial and in the interview. She spoke a lot about what happened to her a few years back, which basically amounted to a nervous breakdown. She was barely eating, she was deeply paranoid, she felt unsafe for good reason, because people (mostly men) were following her around and stalking her and making her feel uncomfortable constantly. The bulk of the interview is about that, but she also talks about her feelings on royalty and more. You can read the full piece here. Some highlights:

Being vegan but not macrobiotic: “If I’m completely honest, I don’t know exactly what macrobiotic means. I know that means things are living in it, right? Don’t say it has to do with midi-chlorians. Please.”

How she dressed up for Halloween: “I’m going as Mrs Rochester from Jane Eyre. My friend said, ‘That is so obscure.’ But I got some grey make-up and I have a hilarious pink gown, so I’m like, ‘F–k it. I’ll be the crazy lady in the attic.’”

Being stalked: “I kept thinking, ‘Am I being a drama queen? Am I paranoid?’ I wasn’t. It was real. It was fucking real and scary. The world is a cyclone. See? Everything out there… is the cyclone. And then there’s the solid thing at the centre of it all. That solid star is my family.”

She no longer calls herself a tomboy: “I now have an issue with the word ‘tomboy’. Why has there got to be a ‘boy’ in it? I was like, ‘Hold on: you’re saying a little girl is actually like a boy because she likes to be active?’ In terms of energy, I would say I do have a strong masculine energy as well as a feminine. But I was a girl. I am one.”

She’s not a royalist: “Here’s the thing. I’m going to tell you something so shocking for Americans but not Brits: I don’t massively care about the royal family. I am not a royalist. Buckingham Palace is great, but it’s an unused building, isn’t it? The other day, there was a story that the Queen uses six rooms in the palace. Six. How is that a good thing? It’s prime real estate.” That said, Ridley is deeply sympathetic to the Duke and Duchess Of Sussex, calling the way they, and Meghan in particular, have been treated by the British press “truly shameful”.

Her six-month sabbatical after The Last Jedi: “Just being in London, it was so nice, not having to rush everything through. Like, I love washing my clothes – I love doing the wash – but when you’re working tons, you’ve got to smash it all in one day. This was ‘Oh, my God. I’m going to do a load today’ every day. It was lovely. I started going on the Tube again. And I was like, ‘You know what? The world didn’t stop turning. It’s really fine.’ It was everybody else making me feel like this was terrifying that made it so terrifying. For so long, I was so scared to say to anyone, ‘It’s not all good all the time.’ Because you know what? It’s not all good all the time. I can say that now. Say no. Now I think I’m very nicely balanced.”

BERTHA. She went as Bertha Rochester for Halloween! But how does one dress up as Bertha? It’s not really a set, go-to costume. And I would have gotten it wrong, absolutely. I would have seen Daisy dressed up as Bertha and I would have said that she was Sexy Nurse Amelia Earhart. Anyway, Daisy brings up an interesting point about “tomboy,” although I still use that term. I’m old though, and for some reason, I always thought “tomboy” was a pretty neutral, inoffensive term. But that’s probably because I was never a tomboy, even though I also have a very masculine energy. Daisy does NOT have a masculine energy, but I would describe her as a tomboy. It’s weird and subjective, I know.

A cute video from British GQ:

23 Responses to “Daisy Ridley covers British GQ: “I now have an issue with the word ‘tomboy’””