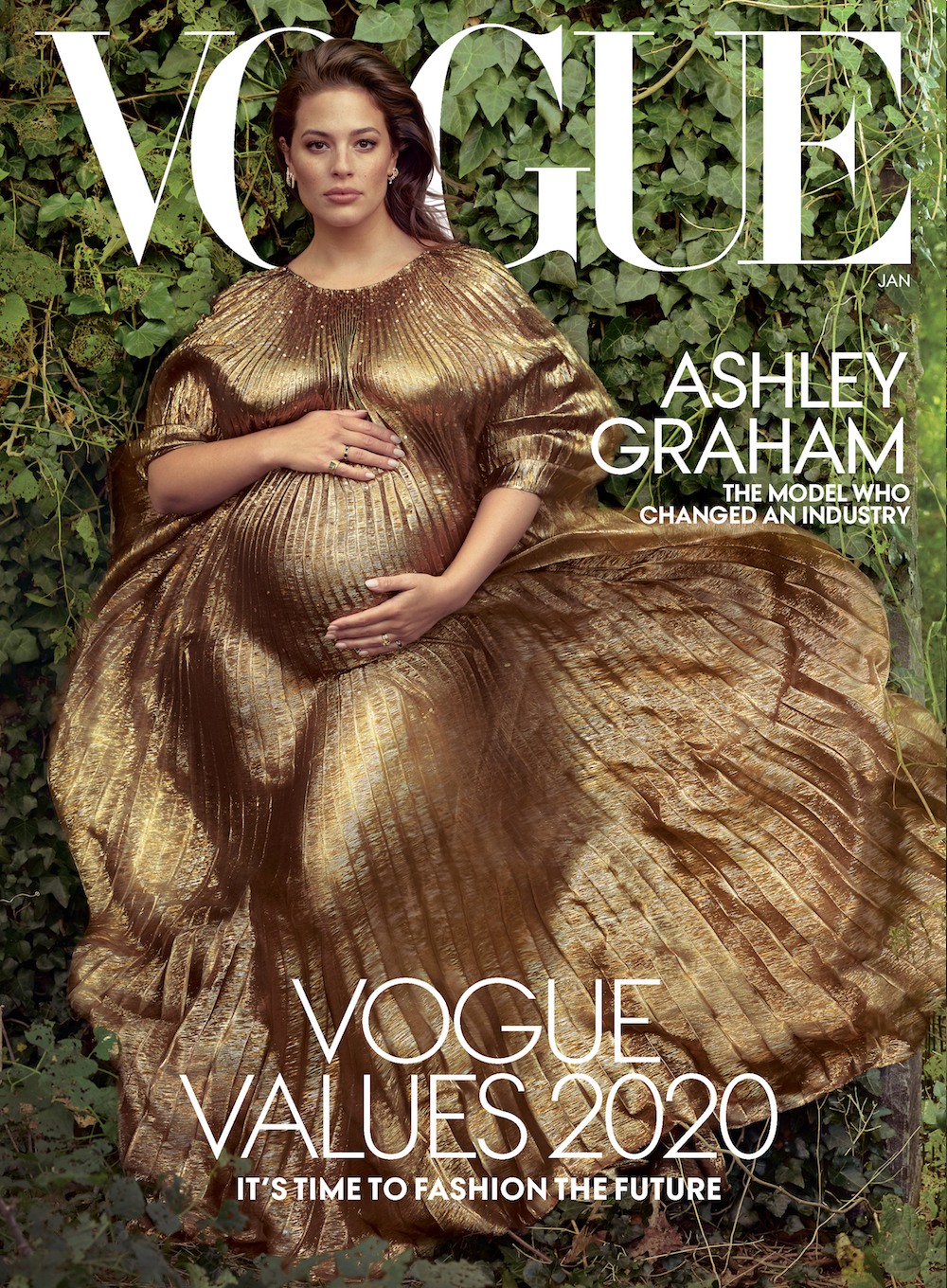 Ashley Graham is one of three cover subjects for the January issue of Vogue Magazine (American). The other cover subjects are Stella McCartney and Greta Gerwig, and I’m covering Greta’s cover interview separately. I’m happy that Ashley got a Vogue cover and it’s funny to me that it happened while she was pregnant. I wonder if Anna Wintour would only allow a so-called “plus sized model” on the cover of Vogue if said model was pregnant? The bulk of the interview is about pregnancy and Ashley’s famous friends are quoted a lot, from Serena Williams to Kim Kardashian to Amy Schumer. All women who had high-profile pregnancies too, and clearly there’s a Mom Squad looking out for Ashley and she’s quite happy to gather all of their advice and information. I was going to say that it annoys me when a celebrity woman acts like she invented pregnancy, but that’s not what’s happening here – Ashley knows she didn’t invent it, and she’s just really, really happy about it. You can read the full piece here. Some highlights:

Kim Kardashian’s advice to Ashley: “Kim immediately started telling me, ‘Ashley, the pregnancy may be the hardest part, but the birth is the easiest.’ I’m just taking in advice from everyone and not putting too much pressure on myself. Serena was like, ‘Call me; we should talk.’ ”

All people want to do is talk about her pregnancy: “I need my alone time, but when I do go out, I’m usually the life of the party. Now all anyone wants to talk to me about is being pregnant. There’s just this camaraderie. It’s a secret society that I didn’t know about. I was hiding my pregnancy for the first four months. I’ve always had control over my body—when everyone else wanted to dictate what it should be, I took full control over it—but I had this life inside of me saying, It’s not yours anymore, it’s mine. And you have to just succumb. And I felt like I didn’t have anyone to talk to. I was gaining weight rapidly. And I felt alone. And the one piece of advice that my stylist, Jordan Foster, gave me was, Make pregnant friends. None of my friends were in relationships, let alone pregnant. And now I have nine pregnant friends.”

Pregnancy sex: “I feel like every relationship goes in waves of sex. You’re like, Hey, do we need to plan this? And now, with pregnancy, things have been real-ly diff-er-ent. Because there’s this huge bulge that can be sensitive if you lay on it or go into a new position. I’ve been literally asking every single one of my friends who have had babies or who’re pregnant, like, ‘What positions do you guys do?’ This has to be a normal conversation among mothers.”

Reclaiming the “plus-sized” label: “As I grew up in the plus-size industry, it was like everybody was trying to do away with that label—get rid of it!—and now we are in a generation where women are embracing plus-size again, they’re embracing the word fat, they’re embracing curvy and big girl, because women are not one–dimensional. Why use just one word to describe such a wide variety of women?”

Whether she ever wanted to be “thin”: “I’ve never been thin, so I don’t even know what that feels like. But I’ve had people tell me I needed to lose weight. I’ve tried every diet known to man, but they don’t work, because I’m a curvy woman—a big-boned, healthy, corn-fed Nebraska girl. It is who I am. And once I accepted that, the more confident I became, and that’s when my career really started to take off.”

She’s having a boy: “It’s a boy.” She grew up with two sisters and is super close to her mom. “I don’t know anything about boys, so I’m so excited.” Justin chimes in: “She owed me a boy. What with all of this wonderful, divine, feminine energy she has around her 24/7, I want a little sidekick.” Just like every other prying little busybody, I can’t help but ask, When are you due? “Okay,” says Graham, heaving a comic sigh, faux put-upon. “I’ll tell you: January 11. He’ll be a Capricorn—just like his dad.” They are both beaming.

Oh, I can’t believe she’s having a boy! How exciting. But yeah, I was getting girl energy from her pregnancy, like everybody else in her life – her husband Justin says in the interview that people kept guessing that it was a girl because that’s simply Ashley’s brand. I also thought the Duke and Duchess of Sussex would have a girl, so clearly my gender-guessing mojo is on the fritz this year. As for Kim’s advice that the labor and delivery is the easy part… girl what? Kim’s deliveries were so complicated that she needed a gestational carrier for her last two kids!