Greta Gerwig compared her astrological chart with Louisa May Alcott’s 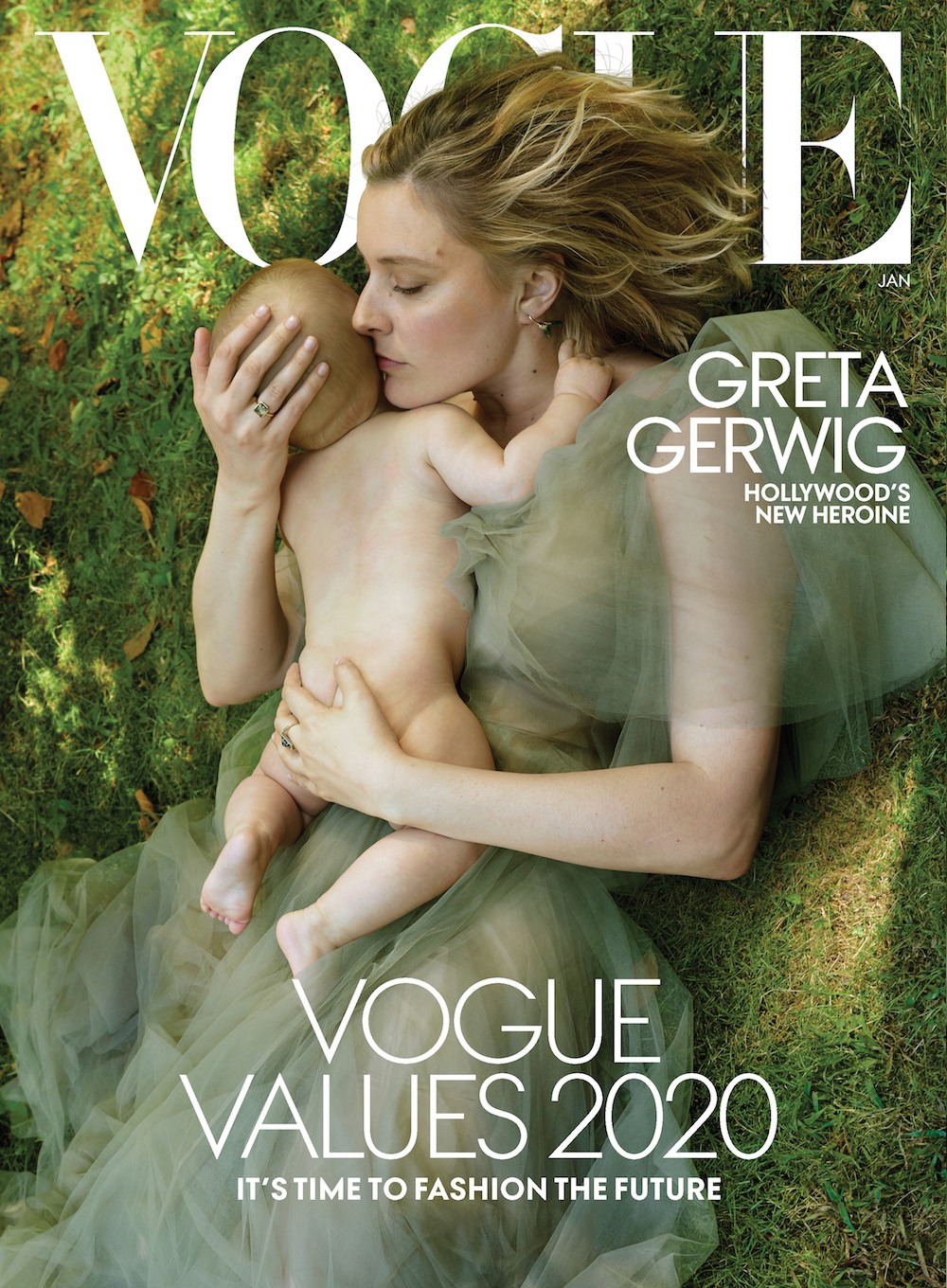 When I was covering a recent Saoirse Ronan interview, I mentioned how often Greta Gerwig has been quoted in Ronan’s promotional interviews for Little Women. I said that it was almost like… Greta Gerwig wants to do more promotion for Little Women than the actors. Gerwig adapted the book for the screen, and Gerwig directed the film of course. But writer/directors rarely get the cover of Vogue. If someone other than Millennial It Girl Greta directed Little Women, would they have gotten a Vogue cover? Hm.

Anyway, I don’t hate the cover. Greta posed with her infant son Harold – that’s truly his name – her first and as-yet only child with her partner/fiance Noah Baumbach. Noah and Greta are this year’s It Couple, because everyone has high expectations for his film, Marriage Story, and her film too. There are such high expectations that no one wants to rock the boat or ask any questions about the timeline of their relationship, and how it really seems like they started up while he was still very much married to Jennifer Jason Leigh. Noah’s split from JJL was his inspiration for Marriage Story, and it’s increasingly bizarre to read interview after interview with both Baumbach and Gerwig where journalists completely ignore JJL’s existence. I mean, it’s more than possible that JJL has moved on and maybe there wasn’t much angst there (that wouldn’t explain Marriage Story though?). But Jesus, NO ONE is even bringing her up, and people are treating Greta and Noah’s son Harold as Noah’s first foray into fatherhood – he had a son with JJL as well. Vogue even goes into the history of Gerwig’s artistic collaborations with Baumbach and the timeline and everything and… still no questions. Anyway, you can read the full Vogue piece here. Some highlights:

Gerwig is into astrology: After the 2018 Oscars Gerwig retreated to a cabin in Big Sur to revise Little Women: “I needed to spend some alone time with Louisa,” she says. Gerwig felt such a kinship with Alcott (at 36, she is the same age as the author when the novel was published) that she had an astrologer compare their charts. “Because so much of making art requires some amount of mysticism,” she says.

Making a subtle change to the Little Women story: “I had the idea that if I could make Jo publishing a book at the end the thing you didn’t know you needed to see, it would be the way you want people to end up together in a movie. You want her to get that book, and you don’t realize it until you see it and she’s holding it in her hands. You’re like, That’s the thing. That book.”

Motherhood: “I was always scared about being a mother, in terms of what it would mean for what I was able to do.”

While she was pregnant, she watched Cardi B’s Instagram every night: She watched the rapper’s pregnancy and birth reveals. “She’d do videos about how her hair looked better, but then she was mad because she had terrible heartburn. Everything. I would eat it up. I’ve just been very moved by women who’ve claimed all of it.”

Naming her son Harold Ralph Gerwig Baumbach: “I gave him all the names.”

When she was Baumbach’s collaborator & people called her his “muse”: “I remember being very frustrated by that and wanting to correct it,” Gerwig says. Journalists also asked whether Baumbach had opened doors for her. They do that less now. “But the answer is: Yes, of course, for so many reasons. But he’s also this incredibly important collaborator and influence on me. The most important. But I think I was hell-bent on making my own films, so I would’ve done it anyway.”

Being an actor & a director: “[Directing is] big and it’s scary, but it’s also the thing that comes most naturally to me. I think Francis Ford Coppola said to me that all the best directors had been actors. He said, ‘I acted. Marty acted and Steven acted. Orson acted.’ I was like, ‘Well, what a wonderful group!’ ”

I knew that Marty Scorsese acted/acts but I didn’t know that Steven Spielberg acted? Hm. Of course I knew that Orson Welles acted – he’s one of the greatest actors of all time, honestly. As for Greta’s blissful life with Noah and the baby and dual films and dual Oscar campaigns… it’s all very nice. I genuinely hope everything works out and six years from now, Vogue isn’t editing out all references of Greta in the interview of Noah’s latest partner/collaborator.

Photo and cover courtesy of Vogue.