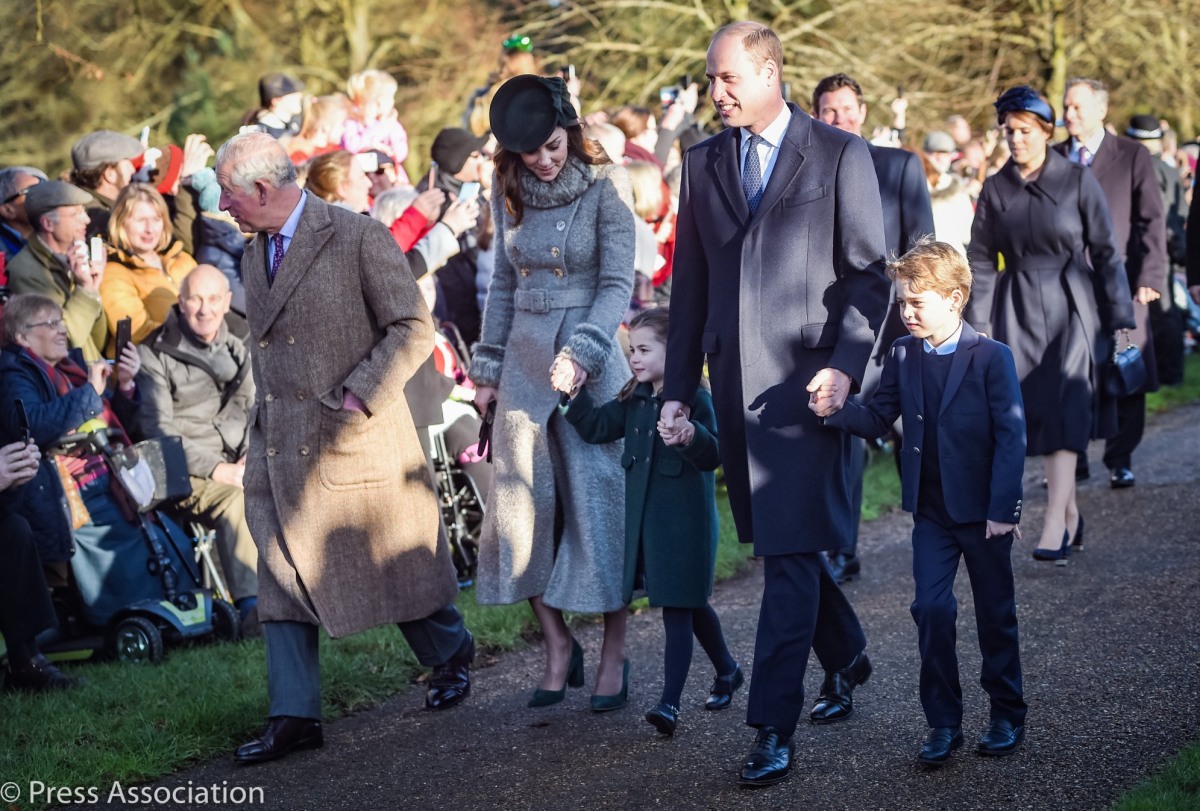 Sure, I was happy to see Prince George and Princess Charlotte join the Sandringham Christmas Day church-walk, but you know what made me even happier? Seeing the Duchess of Cambridge debut some new Christmas Buttons. Kate asked Santa for more buttons, and Santa delivered in the form of this Catherine Walker coat in what appears to be a grey wool boucle (or some kind of textured something). Conservative hem on the coat(dress) and two rows of buttons, how nice. The coat also features faux fur cuffs and collar. I wonder if the collar is detachable? It looks like it. I like this look a lot for Kate, quite honestly. The grey feels wintery and I enjoy the rich green accents – the shoes, the clutch, and the hat. It’s a really great look and while it looks 100% Christmas-appropriate, it could also be worn at any other winter appearance.

As for the kids… Prince Lou got left behind at the house, probably with Grandma Carole. Charlotte and George walked alongside their parents and granddad Charles, and they even interacted with some of the peasants who had waited hours to get a glimpse. Charlotte’s coat was by Amaia. Here’s a video of the Cambridges, the Queen and the other royals exiting the church. Charlotte mimicked her mom’s curtsy (that was likely what Kate bent down to tell her), and you get to see the kids interacting with the peasants a bit.

Prince Andrew did not attend this particular service – it was confirmed by several royal reporters that Andrew went to a service earlier Christmas Day, then stayed home with Prince Philip while everyone else was Christmas-walking. As you can see though, both the York princesses were there, as were Edo and WhatsHisFace, Eugenie’s husband. Bland? Egg? No, Jack. His name is Jack.

Kate looked super-tired? I wonder if she’s like me and she puts off wrapping gifts until late on Christmas Eve. This is the look of someone who was putting together a Barbie playhouse all night and cursing to herself.

Photos courtesy of The Press Association (via KP) and Getty.