Katy Perry: ‘Young people – Gen-Z, more than anyone – can sniff out frauds’ 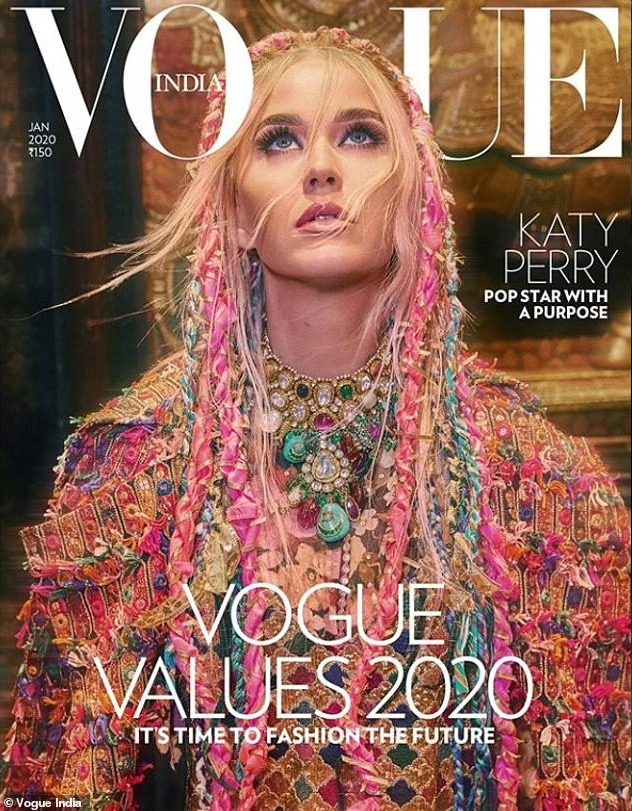 Whenever a white woman wears any kind of Indian-specific outfit, I feel like I have to always say that… it’s not really appropriation to do that? I won’t speak for all Indian people, but my feeling as a half-Indian woman is that Indian clothing is just… clothing. It’s beautiful and well-made and can be worn by anyone. As long as someone isn’t wearing something in a mocking way, and as long as they’re respectful of the culture, why not? That being said, I do side-eye Katy Perry’s obsession with so many Asian cultures. It’s an obsession almost bordering on fetishization. Wooo… a conversation for another time. Anyway, Katy covers the latest issue of Vogue India. On one side, I’m sure these Indian designers love that an international pop star is wearing their designs. On the other side…yeah, a minor side-eye. As for the interview… it’s nice. She talks a lot about mental health and Orlando Bloom and how much work she’s done on herself in her 30s. Some highlights:

Her secret to surviving her crazy schedule: “Transcendental meditation. There are so many different forms of meditation I’ve done, but nothing supersedes TM. It changed my life.”

Her mental work over the years: “I’ve done a lot of mental, spiritual and emotional work in the past few years. The biggest lie we’ve ever been told as artistes is that we have to stay in pain to create. I don’t want to be in emotional pain my whole life in order to write songs… I like to write songs that really move or empower people. If you divided my songs, they would be 50 per cent [about] empowerment, 25 per cent party and 25 per cent romantic. They are heavy on hope and positivity, like going towards the light. I reject the darkness.”

On authenticity: “I think I’m young at heart and they see that. Authenticity is important to me, and young people—Gen-Z, more than anyone—can sniff out frauds.”

Finding the balance: “I’ve gone to therapy, been through the Hoffman Process, done plant medicine…. And I have a partner who is also all about finding a balance—Orlando, who is on a spiritual journey of his own. He’s an anchor who holds me down, and he’s very real. He’s not the number one fan of Katy Perry, but he’s the number one fan of Katheryn Hudson.”

Love in one’s 30s: “Love is different from dating. You date in your twenties. Love is partnership, friendship, truth and being an absolute mirror to someone. Orlando is like a sage. When we first met, he said we would pull the poison out of each other, and we really do. It’s exhausting, but we really hold each other accountable. I’ve never had a partner who was willing to go on an emotional and spiritual journey like Orlando. It’s challenging, because you’re facing all the things you don’t like about yourself. It’s like a never-ending cleanse.”

She was deeply depressed in 2017-18: “I became depressed and I did not want to get out of bed. In the past, I had been able to overcome it, but this time something happened that made me fall down too many flights of stairs. I had to really go on a mental health journey… We talk about all our different organs but never talk about out brain, which keeps us functioning the most.”

Her political and charitable work: “If you have a big spotlight and you’re sharing it for good, it’s going to be better for everyone. At 35, I’ve checked many boxes off my list and I’m now being challenged to dream new dreams. I want to be involved in environmental companies, I want to go back to school [psychology and philosophy will be her subjects of choice] and I want to influence good people to run for office.”

“I became depressed and I did not want to get out of bed…” That was in reference to 2017-18, so that wasn’t about the peak years of her beefing with Taylor Swift. That beef was more circa 2014-16, although they only formally buried the hatchet in 2019. Plus, it’s dumb of me to look for a “reason” why she was depressed. It was probably like she said, a snowball effect of bad thing after bad thing and she couldn’t find her balance for a few years. Yes, Katy is sort of goopy and it strikes me that she’s probably a target audience for Goop, actually, but with Katy, I buy that her journey is authentic, you know? She really is trying all of this stuff because she wants to be a genuinely better and healthier person. IDK, maybe I’m giving her too much of the benefit of the doubt.

41 Responses to “Katy Perry: ‘Young people – Gen-Z, more than anyone – can sniff out frauds’”