Beyonce & Jay-Z arrived late to the Globes, but they brought their own booze

Don’t hate me for forgetting Beyonce! I didn’t really FORGET Beyonce at the Golden Globes, it was more like… I just assume that Beyonce is always there, omnipresent, omniscient and goddess-like. Actually, I just forgot because she didn’t walk the red carpet and there were not many of photos of her. But the Queen understand how this works, so on Monday, she dropped the full-length photos of her Schiaparelli look, and she authorized her stylist to speak to the Hollywood Reporter:

While Beyoncé wowed per usual in a glorious custom look by Schiaparelli with on-trend voluminous golden sleeves at the 2020 Golden Globes on Sunday night, many viewers were frustrated by Bey’s lack of airtime.

The best original song nominee (for “Spirit” from The Lion King) skipped the red carpet and was not a presenter, so also had no time on stage. (She and Jay-Z arrived fashionably late, and were asked to stand and wait to be seated, as documented by The Hollywood Reporter’s awards columnist Scott Feinberg). Beyond that, the pro photographers somehow didn’t manage to snap her. And then she and Jay-Z made an early exit. So images of the power couple were few and far between. To make up for it, Bey and Jay conducted their own private photo sesh, posted to Instagram on Monday morning.

Beyoncé’s stylist Zerina Akers chatted with The Hollywood Reporter about the look: “When I first laid eyes on Daniel Roseberry’s debut collection at Schiaparelli, I knew I wanted to work with him” she said. “I loved his approach to volume and wanted Beyoncé to be one of the first to dawn the new haute couture style of the house. I leaped at the first chance to work with the Schiaparelli team on a custom project and they delivered. Lorraine Schwartz sealed the deal with these custom earrings and rings!”

Apparently, she wore $8 million worth of diamonds. If someone loaned me that many diamonds, I would want to be photographed from all angles by hundreds of photographers. Anyway, her look was great, especially compared to the trainwreck style we saw from many of the women. Also: when people did get a glimpse at Beyonce during the show, they couldn’t stop talking about how she remained seated when Joaquin Phoenix won:

Beyoncé sitting during the standing ovation for Joaquin Phoenix's win is the type of energy I want to see from everyone in 2020 pic.twitter.com/EJD8uq4mHq

Which is fine by me – it’s not like she was in Joaquin’s path and she needed to move out of the way. She was comfortable and she probably thought “Joker wasn’t even good, I’m not standing.”

In addition to that, Beyonce and Jay-Z brought their own bottles of champagne!! They brought two bottles of Ace of Spades (Armand de Brignac) champagne (held by a bodyguard), and when The Morning Show table ran out of booze or water, Reese Witherspoon asked if Beyonce and Jay would share and they did! So Jennifer Aniston and Reese drank Jay’s champagne.

. @Beyonce and Jay-Z just walked in. They're waiting until Kate McKinnon finishes speaking to take their seats. Is their bodyguard carrying bottles of alc for them? pic.twitter.com/eeB7NPHW4g 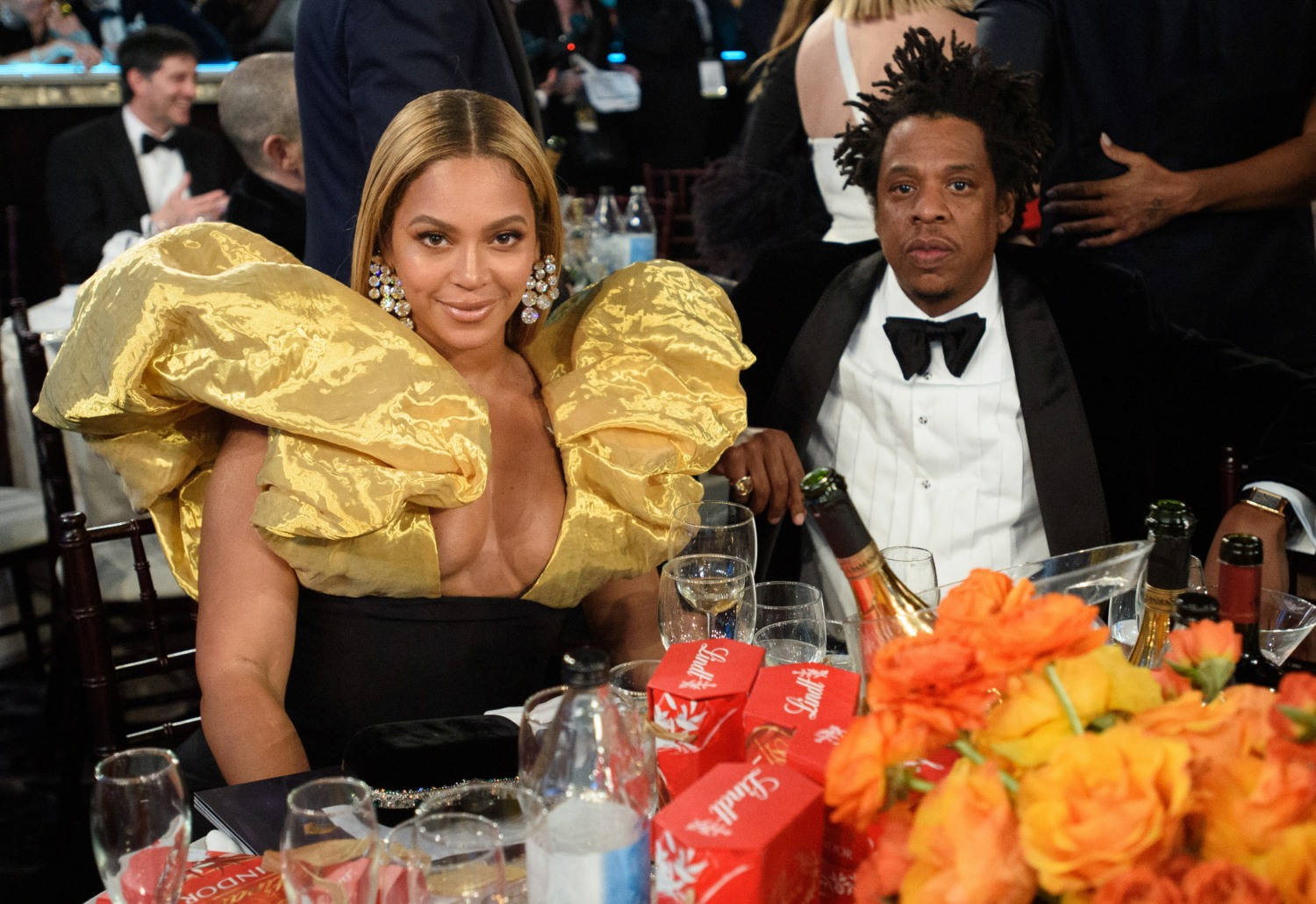 188 Responses to “Beyonce & Jay-Z arrived late to the Globes, but they brought their own booze”