Florence Pugh on Amy in ‘Little Women’: ‘I love all the incredibly spoiled characters’ 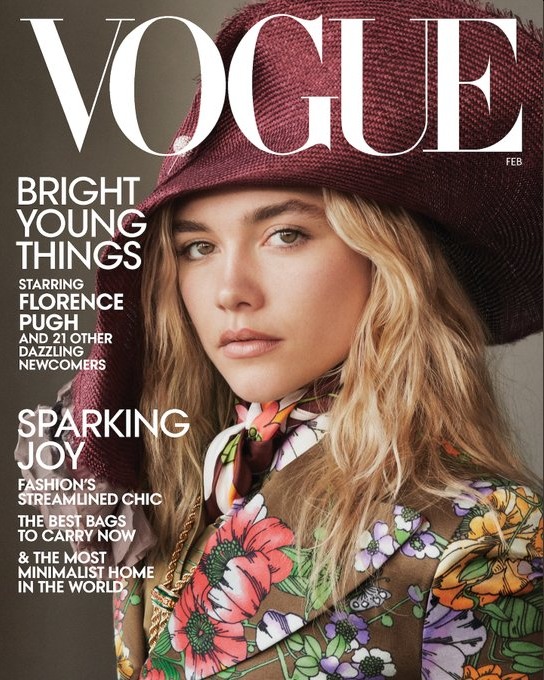 If you’ve seen Midsommer, you might have chuckled a little bit at this cover. I think it’s meant to be sartorially evocative of Midsommer with the floral and the hat/headpiece, don’t you? Anyway, Florence is now an Oscar-nominated actress. She was surprise-nominated for Little Women, in the supporting category. It’s one of those moments where an actor had several good films in a year but the Academy just chose to nominate her for one. Personally, I would have loved to see a bigger push for Pugh to get a lead-actress nomination for Midsommer. So here we are, Florence is British, young, blonde and talented. Of course Anna Wintour put her on a pre-Oscar cover. You can see her full Vogue profile here. Some highlights:

Working on the Marvel film, Black Widow: “I didn’t quite know what it was to be involved in one of these films. Obviously you have to be physically able because the whole point is that you’re a superhero.” Pugh says the story “deals with some really hard things. It’s rough and painful and emotional and funny, and not in any way. . . girly. It’s about broken women picking up the pieces.”

She loves cooking & hosting: To this day, she finds making food for someone “one of the simplest but most wonderful ways to have a date.”

She first came to LA for the pilot Studio City. She was 19. But she had “a horrid time,” she recalls, with her weight an open topic of conversation. “I had a bit of a meltdown,” she says now. “When it didn’t go through, that was when I realized how relieved I was.”

On playing Amy in Little Women: Her version of Amy is “not such a whiny tit.” Pugh herself never disliked Amy when she read the book. “I love all the incredibly spoiled characters, because they always represent that voice in our heads. Amy basically says everything she wants to say. She doesn’t care. So I was obviously ecstatic to play her.”

I came into this interview not knowing anything about Florence’s personal life or family, and so this is my opinion based solely on this piece: she’s a nice British girl, not very posh, sort of low-key and boho and she seems like a nice person. She’s a people-person too, which makes her stand out in a sea of actors claiming to be nervous, shy, disaffected loners. She’s happy around people, and she makes friends easily. She seems like a cool young woman.

19 Responses to “Florence Pugh on Amy in ‘Little Women’: ‘I love all the incredibly spoiled characters’”