Ariana Grande in Giambattista Valli at the Grammys: did Rihanna do it better? 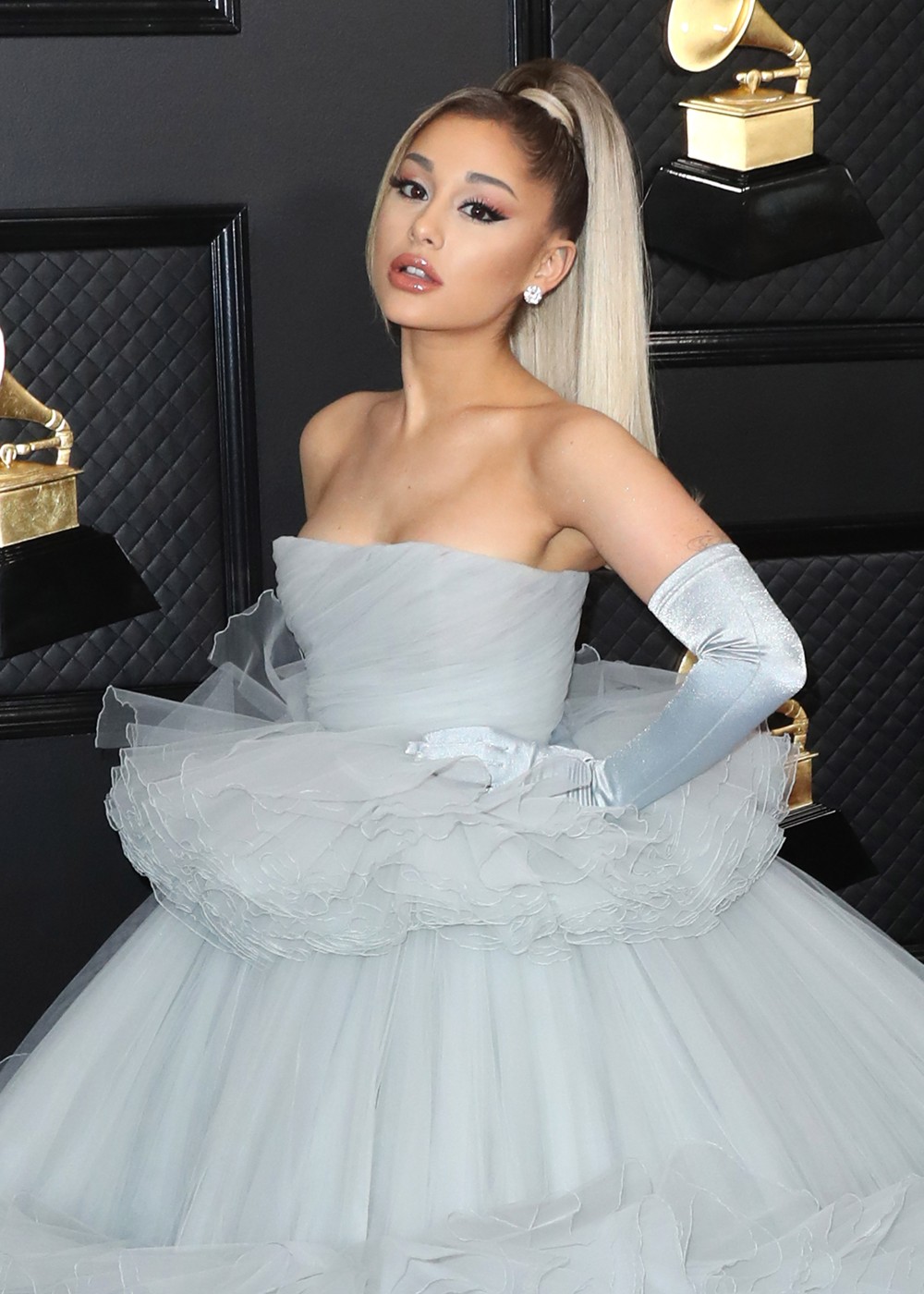 Ariana Grande made one of the more dramatic entrances at the Grammys in this absolutely voluminous Giambattista Valli. She said her stylist, Law Roche (he also does Zendaya, Celine Dion and Jameela Jamil), cried when he saw her in it. This dress reminded me so much of the giant iconic pink dress Rihanna wore to the 2015 Grammys so I checked and that was also by Giambattista Valli. I love it and I think Ariana is working it. She’s not working GV as much as Rihanna did, but that’s a very high bar. I missed Rihanna last night but it’s been four years since she brought us a new album! 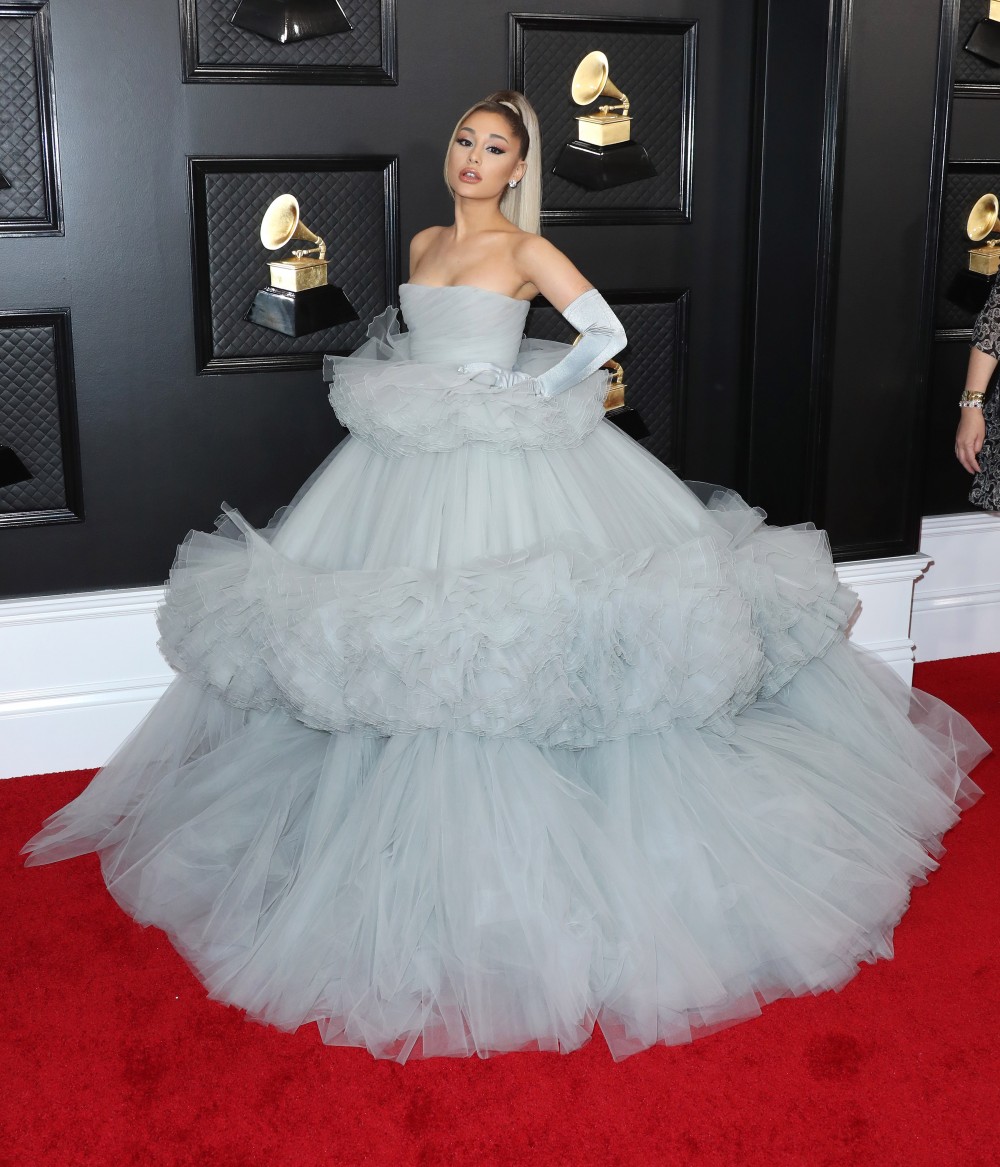 Also I read some criticism on Twitter of Ariana’s gloves. I agree she could have gone without the gloves. Ariana did a medley of her hits last night that was a little subdued, but I loved the sets, she had a whole rotating bedroom, and her dancers were incredible. Ariana was nominated in four categories, all of which went to Billie Eilish or Lizzo. Oh and she came with her parents, which was cute. Here’s a side by side of Ari and Rihanna’s looks.

Jameela Jamil was also styled by Law Roach. Jameela was in a tiled metallic blue and black tulle tiered ruffled Georges Chakra gown with an inexplicable sheer panel mid-skirt. I dislike that feature and it’s somewhat rare on gowns for good reason. This might be ok if the skirt ended right before the sheer part. Jameela’s boyfriend, James Blake, was nominated for best alternative music album which went to Vampire Weekend. 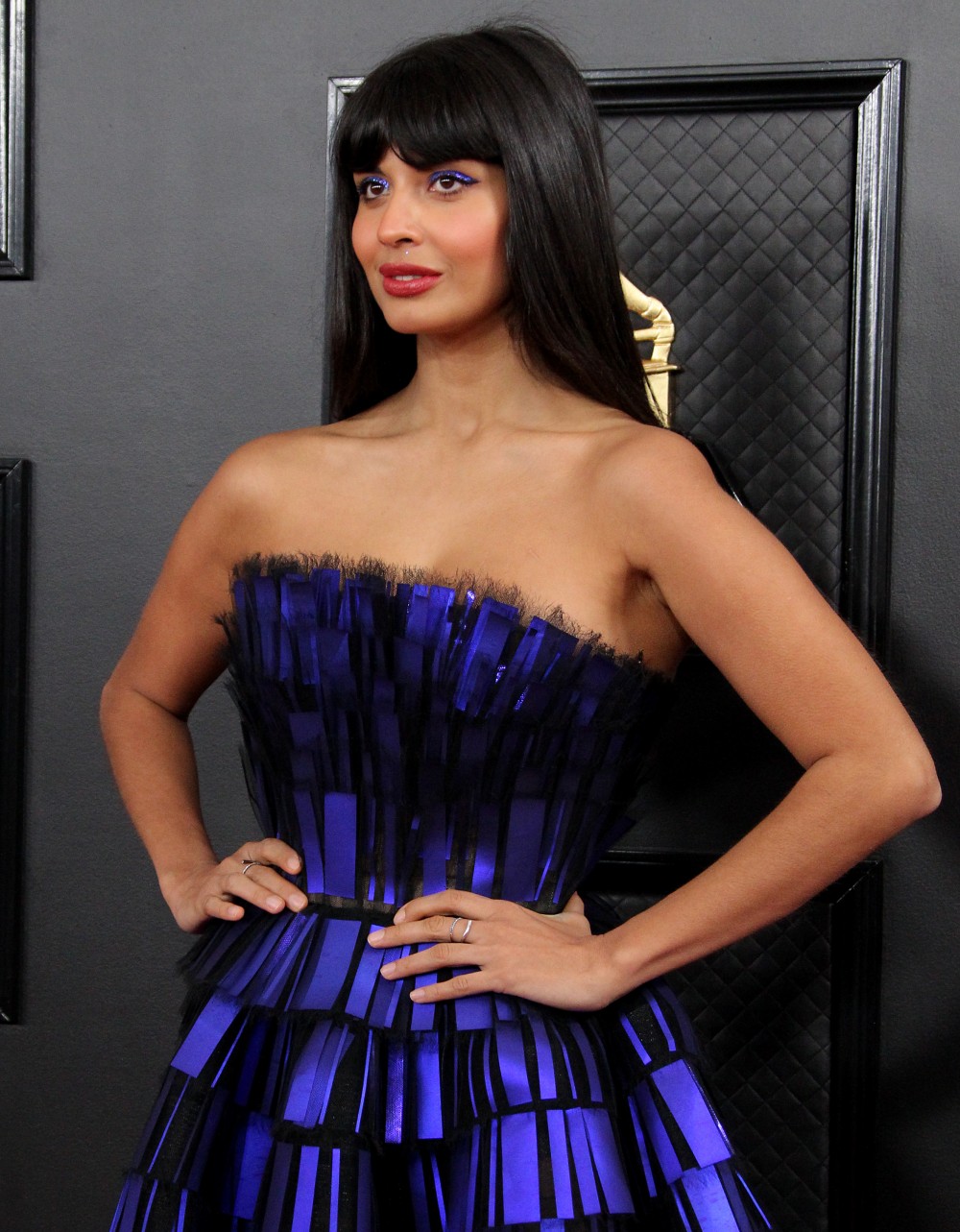 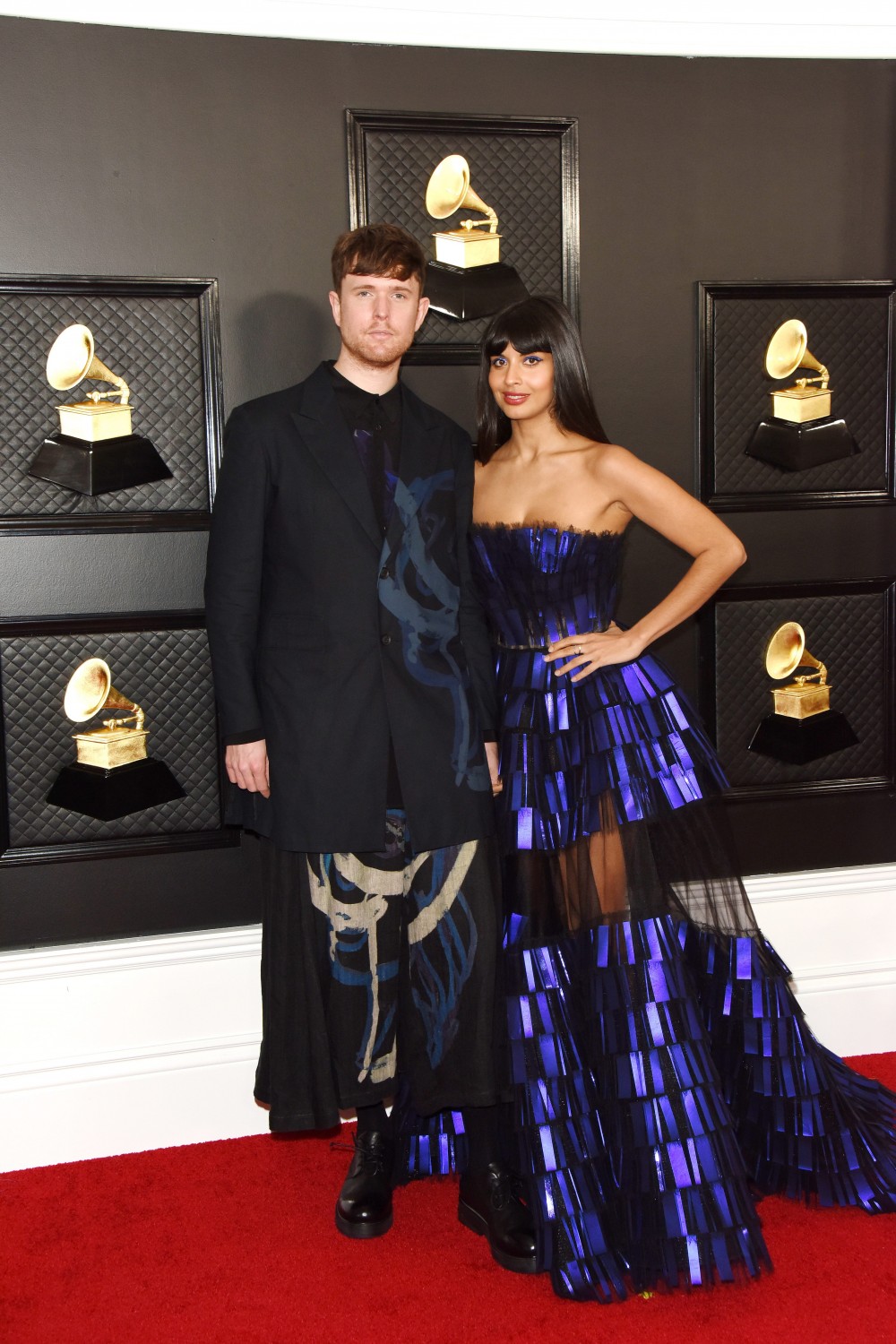 H.E.R. was nominated in five categories but didn’t take home anything last night. She did an incredible performance of her new sing, “Sometimes,” that included a rocking guitar solo. I’m not going to lie, I went to bed before this happened as H.E.R. didn’t go on until after 11 EST (when the Grammys should have been over, they went on for a half hour after that). I just watched it this morning and I’m going to download that song now.

H.E.R. was in a strikingly beautiful kimono with a gold belt. This was one of my favorite looks and I loved her hair and makeup especially. 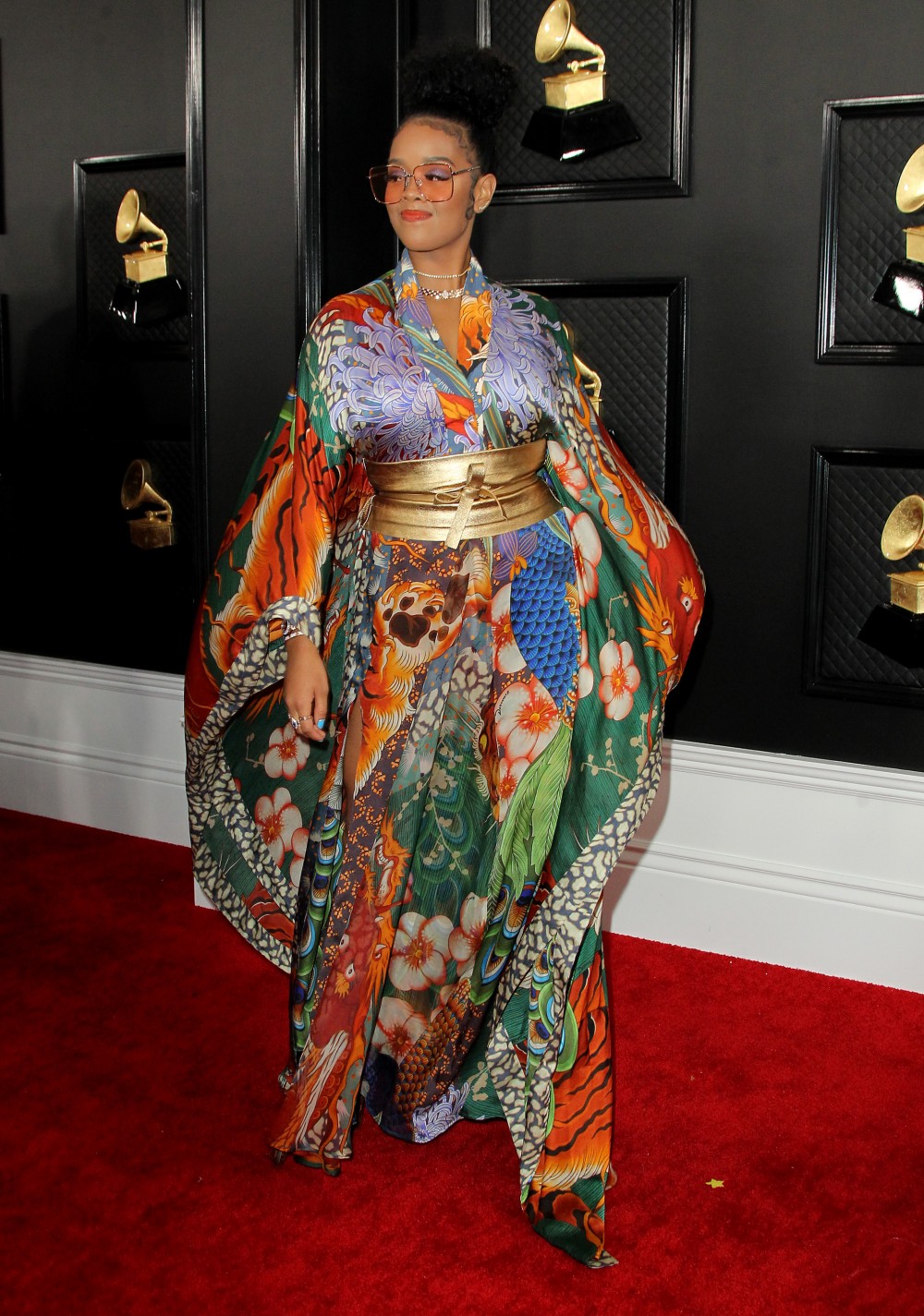 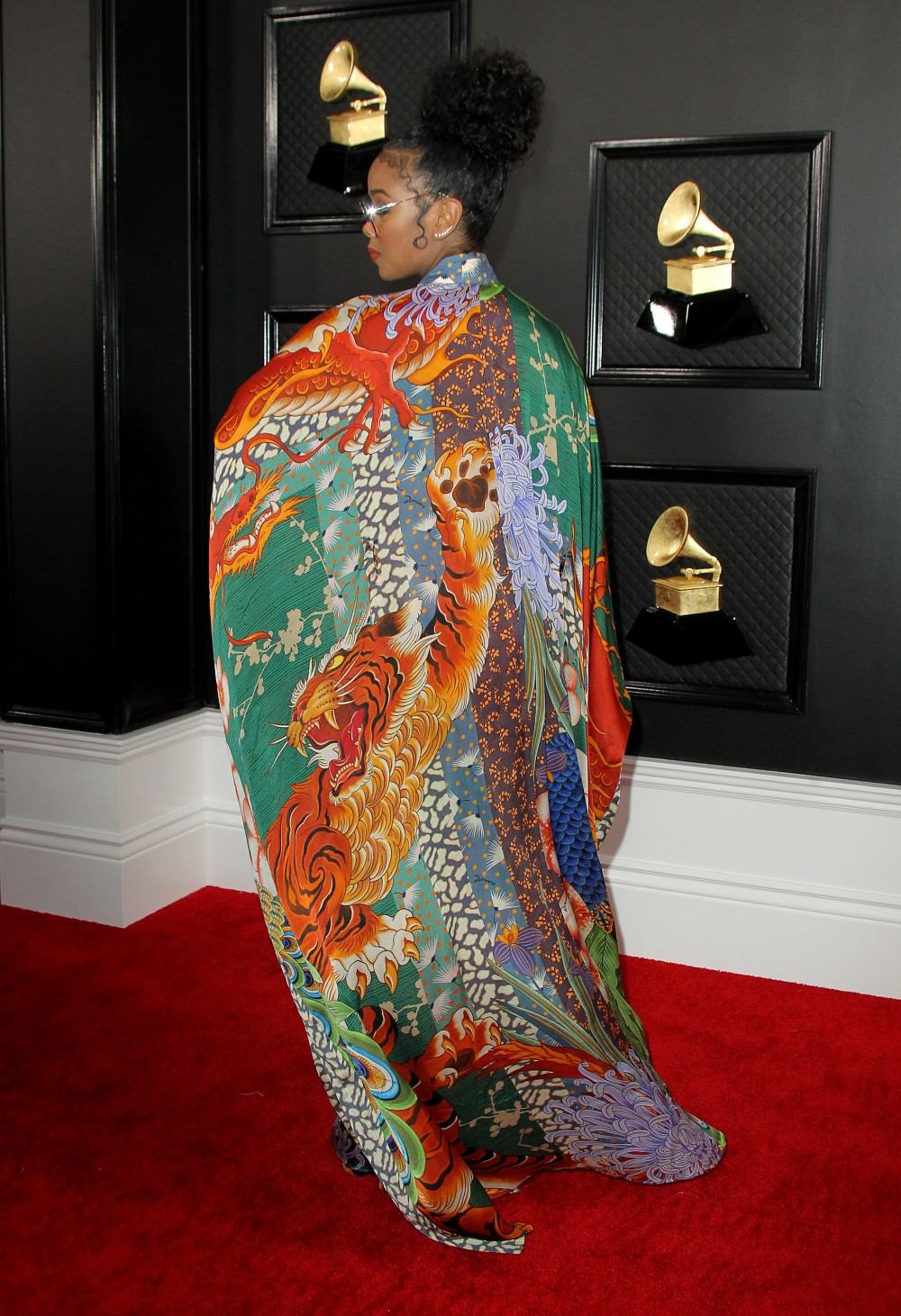 43 Responses to “Ariana Grande in Giambattista Valli at the Grammys: did Rihanna do it better?”