Billie Eilish on pop stardom: ‘I realize now that it’s everything I ever wanted’ 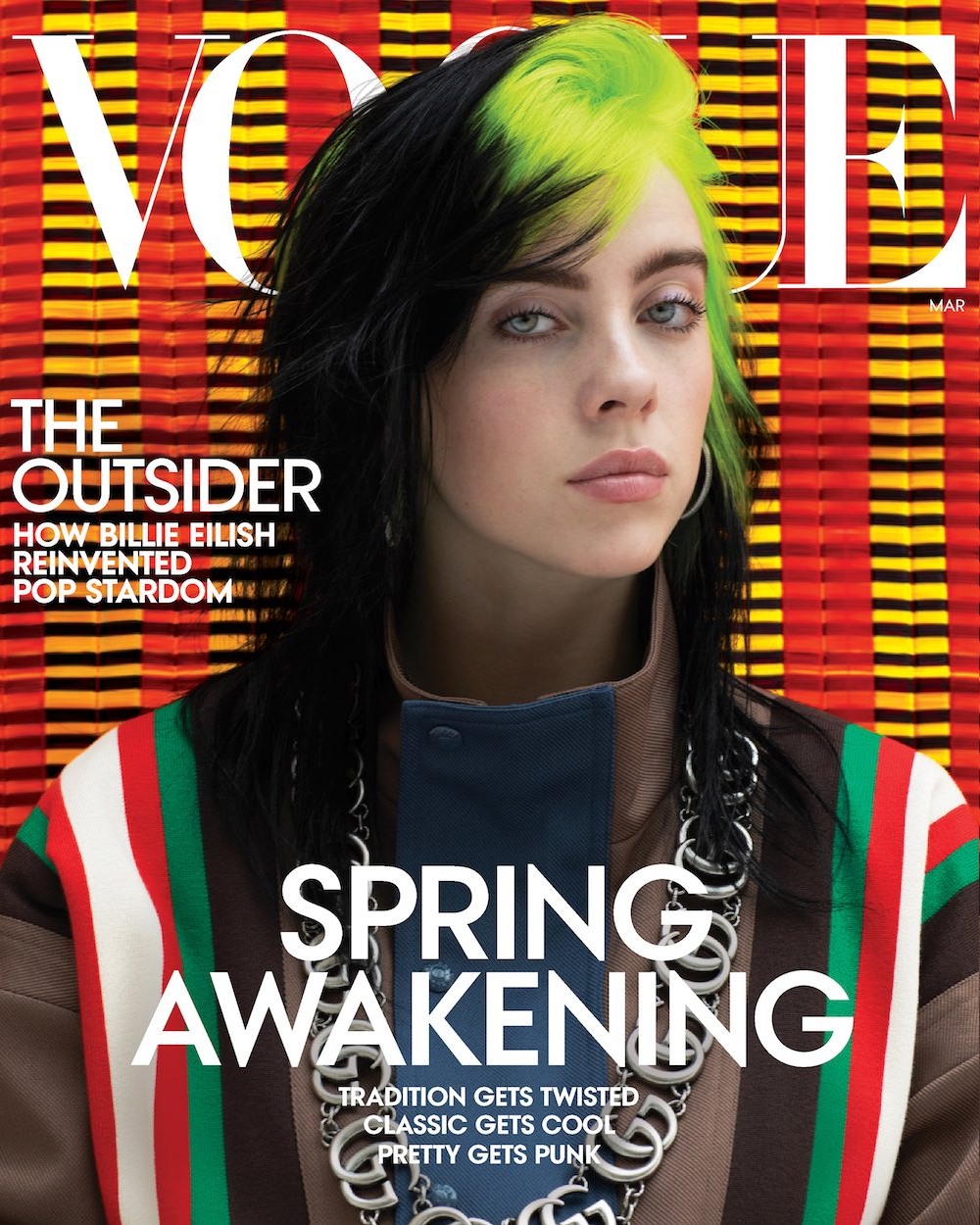 I really have to prepare myself mentally and emotionally for reading Billie Eilish’s interviews. I find her to be A LOT, and I’m not saying that as an insult or as praise. She’s just… a lot. She seems like a normal teenager about some things, and a very strange girl about other things. She does have that intangible quality though – relatability, with a dash of strange, gothic glamour. If I was 14 years old, I would have been SO into Billie and everything she represents. Anyway, Billie covers the March issue of Vogue and this interview is (you guessed it) a lot. Thankfully, Vogue doesn’t exhaustively cover the same ground from other Billie interviews – her parents, her array of neuroses, her “unconventional” way of recording music in her brother’s room, sitting on his bed. You can read the full Vogue piece here. Some highlights:

The “anti-pop” branding: “This whole time I’ve been getting this one sentence, like, I’m a rule-breaker. Or I’m anti-pop, or whatever. I’m flattered that people think that, but it’s like, where, though? What rule did I break? The rule about making classic pop music and dressing like a girly girl? I never said I’m not going to do that. I just didn’t do it… Maybe people see me as a rule-breaker because they themselves feel like they have to follow rules, and here I am not doing it. That’s great, if I can make someone feel more free to do what they actually want to do instead of what they are expected to do. But for me, I never realized that I was expected to do anything. I guess that’s what is actually going on—that I never knew there was a thing I had to follow. Nobody told me that sh-t, so I did what I wanted.”

She was always musical but was never all about it: “You know how there’s always that singer kid who’s like, ‘I can sing!’ and then would sing in front of you? I remember hating that person. The kid who does it for the applause and thinks they’re amazing, and their mom is like, ‘Yeah, she’s gonna be da-da-da.’ I never put myself in that category, so for a long time I didn’t realize that I was a singer, too.”

On being home-schooled: “I’m so glad I didn’t go to school, because if I had, I would never have the life I have now. The only times I ever wished I could go were so I could f-ck around. At times I just wanted to have, like, a locker, and have a school dance that was at my own school, and get to not listen to the teacher and laugh in class. Those were the only things that were interesting to me. And once I realized that, I was like, Oh, I actually don’t want to do the school part of school at all.”

Why she dresses in such baggy clothes: “I just hated my body. I would have done anything to be in a different one. I really wanted to be a model, really bad, and I was chubby and short. I developed really early. I had boobs at nine. I got my period at 11. So my body was going faster than my brain. It’s funny, because when you’re a little kid, you don’t think of your body at all. And all of a sudden, you look down and you’re, like, whoa. What can I do to make this go away?” She engaged in some self-injurious behavior that she does not elaborate on. She thought of suicide. But by June of last year, after some changes in her life that she prefers to keep private, the fog began to lift. “When people ask me what I’d say to somebody looking for advice on mental health, the only thing I can say is patience. I had patience with myself. I didn’t take that last step. I waited. Things fade.”

Pop stardom & her Grammys sweep: “I realize now that it’s everything I ever wanted,” she says. And of her surprise Grammys sweep, she tells me, “That sh-t was f-cking crazy. If anything it’s an exciting thing for the kids who make music in their bedroom. We’re making progress, I think, in that place—kids who don’t have enough money to use studios.”

She’s mad that people side-eyed the fact that she & Drake text: “The internet is such a stupid-ass mess right now,” says Eilish, who quit Twitter in 2018. “Everybody’s so sensitive. A grown man can’t be a fan of an artist? There are so many people that the internet should be more worried about. Like, you’re really going to say that Drake is creepy because he’s a fan of mine, and then you’re going to go vote for Trump? What the f–k is that sh-t?”

I don’t know about the voting for Trump part, but yes, it’s creepy that she texts Drake. As a stand-alone thing between two musical stars, I might be willing to give him the benefit of the doubt, but honestly, when a grown-ass man has a pattern of texting underage girls, there’s a legit problem. What else? I actually enjoyed the interview but I’m starting to worry that Billie’s parents are going to have to move into a bigger house and Billie’s going to have a nervous breakdown when that happens. She also told a funny story about how, when she was a kid, she didn’t understand why so many pop stars had nervous breakdowns and now that she’s touring the world and getting billions of streams, she thinks “Oh, my God, of course they had to do that.” 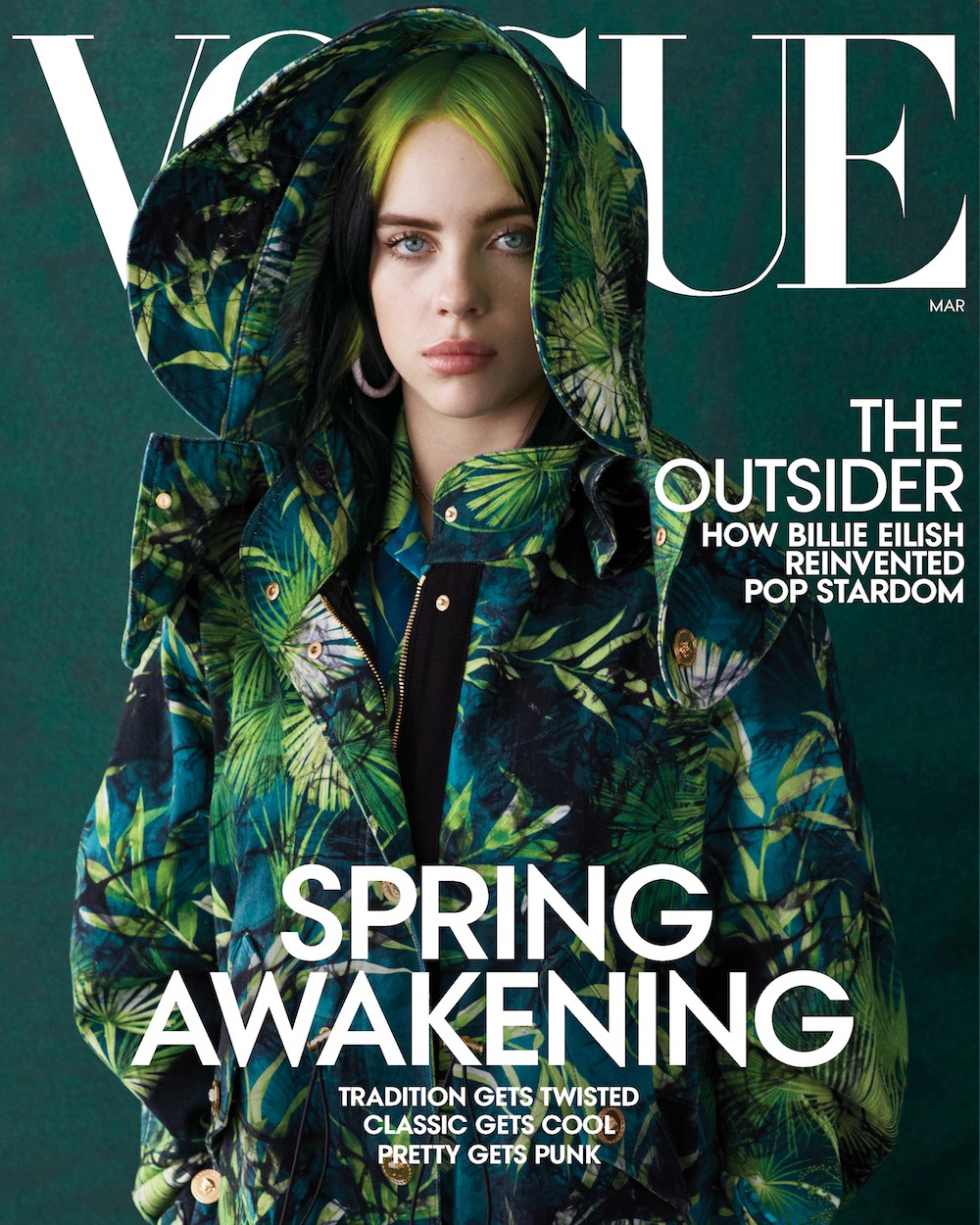 53 Responses to “Billie Eilish on pop stardom: ‘I realize now that it’s everything I ever wanted’”