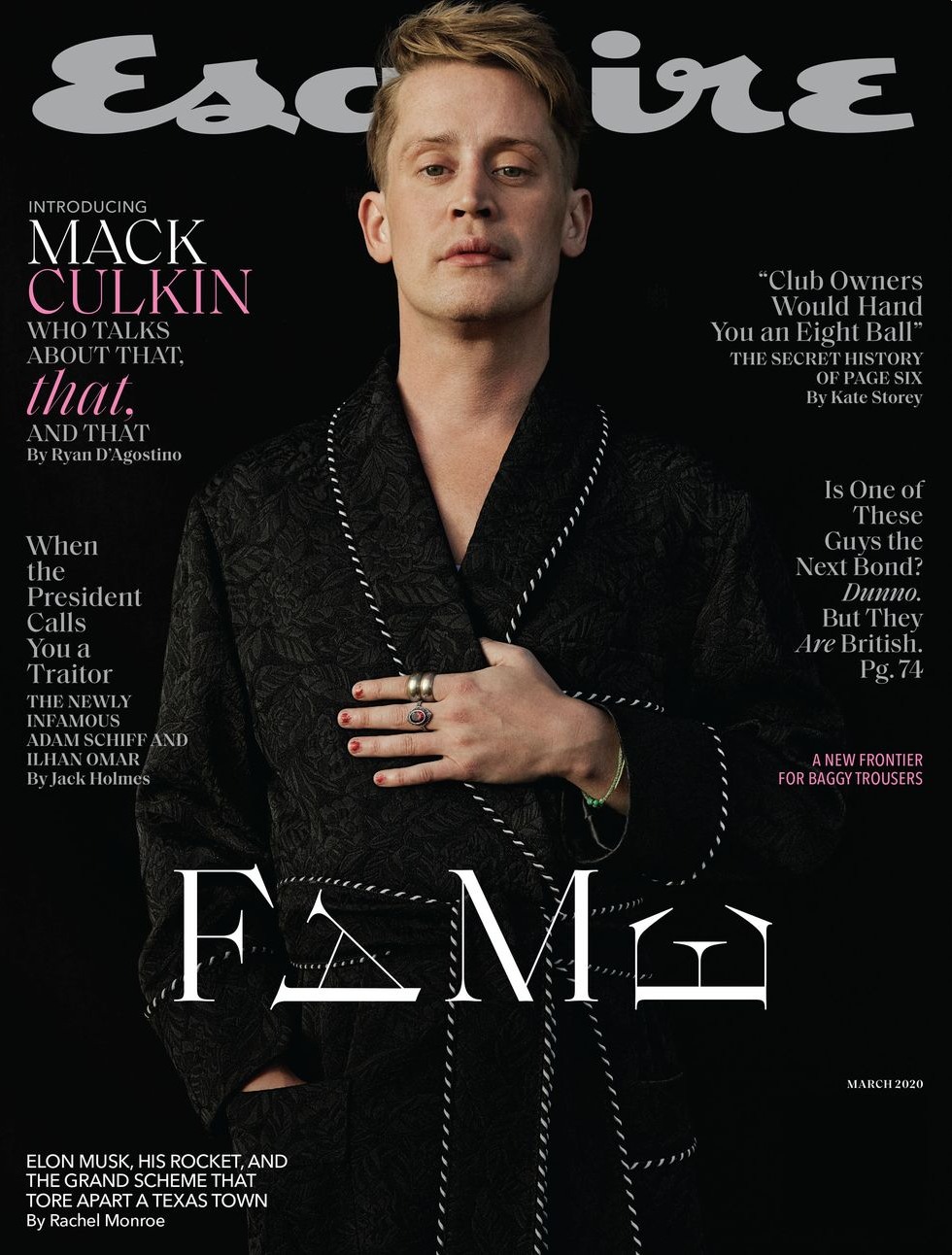 This Esquire cover dropped a few days ago and I kept putting it off because I thought it was going to be a bummer, and I thought Esquire would reveal that Macaulay Culkin is, like, a damaged, problematic a–hole or something. Guess what? It’s not a bummer. It’s a well-written, thoughtful piece about an interesting guy who had some awful years as a child star, but has grown up to be a nearly-40 dude who seems pretty well-adjusted, self-aware, happy and reflective. He’s vaguely promoting his website, Bunny Ears, and his podcast, but even then, he’s not really promoting anything. His girlfriend/partner Brenda Song wants him to get back into acting and get out of the house sometimes, so he basically agreed to an interview and a photoshoot to make her happy, but in a nice way. Anyway, the piece is interesting and I would recommend reading the whole thing – go here. Some highlights:

He’d rather be with his lady & cats than doing the photoshoot: “Yeah, this is waaayy better than being home wearing my pajamas. Oh, yeah. Why would I want to be home in my bed right now? With my cats? And my lady? That would be terrrrible…. This is not really my cup of tea. These are all lovely people, but the poking, the prodding—honestly, it’s part of why I don’t do this anymore. Any of it.”

He’s not crazy: “People assume that I’m crazy, or a kook, or damaged. Weird. Cracked. And up until the last year or two, I haven’t really put myself out there at all. So I can understand that. It’s also like, Okay, everybody, stop acting so freaking shocked that I’m relatively well-adjusted. Look: I’m a pretty peerless person. If I was an accountant, I could look left and right, and there’s other accountants sitting next to me in the office. It’s not like that. It’s one of those things where, like, the cliché that we’re all snowflakes? That we’re all unique? Well, you know what? I actually am a snowflake.”

He didn’t really divorce his parents: “We [me and my siblings] didn’t want to go with my father. It’s always misconstrued, that I ‘emancipated’ myself from my parents. I legally took my parents’ names off of my trust fund and found an executor, someone who would look over my finances, just in case anyone wanted to stick their f–king pinkie in the pie. But the next thing you know, the story was that I divorced my parents. I just thought I was doing it cleanly—taking my father’s name off, taking my mom’s name off, so my opinion is unbiased. And when I did that, the whole thing kinda ended a lot faster.”

Child stardom: “But: It coulda been worse, you know? I wasn’t working in a coal mine. I wasn’t a child soldier. My father was not sexually abusing me. Certain f–ked-up things happened, but f–ked-up things happen to kids all the time and they don’t come out the other end. I’ve got something to show for it, man. I mean, look at me: I got money, I got fame, I got a beautiful girlfriend and a beautiful house and beautiful animals. It took me a long time to get to that place, and I had to have that conversation with myself and go, like, Honestly, Mack? It’s not so bad. I want for nothing and need for even less. I’m good, man.”

His animals: They have two cats—Apples and Dude—and a fish named Cinnamon. (“I tend to name all the animals as if I was a five-year-old,” Mack says.) They have a Shiba Inu, Panda. And they have a bird, a blue-headed pionus, a relatively quiet species of parrot, that was named Nacho when Andy Richter had it for ten years but that Mack calls Macho.

His friendship with Michael Jackson: “Look. I’m gonna begin with the line—it’s not a line, it’s the truth: He never did anything to me. I never saw him do anything. And especially at this flash point in time, I’d have no reason to hold anything back. The guy has passed on. If anything—I’m not gonna say it would be stylish or anything like that, but right now is a good time to speak up. And if I had something to speak up about, I would totally do it. But no, I never saw anything; he never did anything.

On drugs: “Um? Listen. I played with some fire, I guess is the best way to put it. At the same time, I’ve never been to rehab or anything like that. I’ve never had to clean out that way. There were certain times when I had to catch myself, once or twice. You’re having too good a time, Mack. I mean, I’ve had friends who ask me, ‘How do I get clean?’ And I go, I’m the last person you should ask, because I’m gonna give you the worst advice, which is: Just stop. Just stop! And that’s not the way it works. But I never went so far down that road where I needed outside help. I wouldn’t be the person I am today if I hadn’t had drugs in my life at some point or another. I had some illuminating experiences—but also it’s f–kin’ stupid, too, you know? So besides the occasional muscle relaxer, no, I don’t do drugs recreationally. I still kinda drink like a fish. I drink and I smoke. But I don’t touch the things. I do love them. They’re like old friends. But sometimes you outgrow your friends.”

There are some really lovely little asides about how quiet his life is with Brenda Song, how he takes care of the house and waters the plants and takes care of her while she’s working, and he’s always bringing her food (and she bakes for him too). He sounds… yeah, well-adjusted. Like he came out of everything damaged, but aware of the damage and able to understand what happened. Now, I’m sure that some people won’t believe what he says about Michael Jackson, but… I kind of do? I think MJ saw himself in Culkin, saw a kid who was being mistreated by his father, and Michael wanted to be his friend. Who knows though.

Cover and IG courtesy of Esquire.