Post Malone explains his face tattoos: ‘It does maybe come from a place of insecurity’ 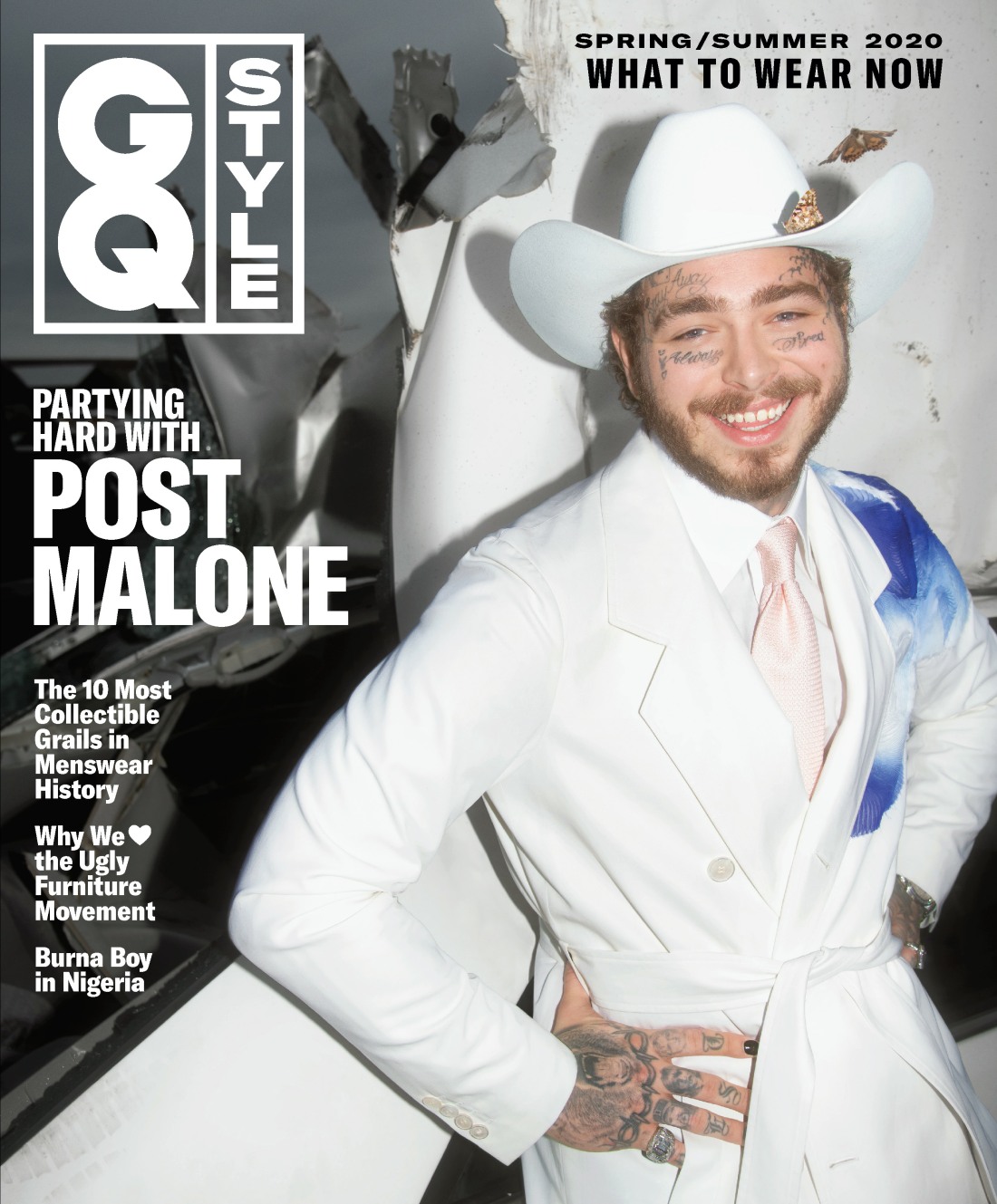 I have a weird love for Post Malone. I just like him, and not in the Diplo way. With Diplo, I don’t really care about what he says or does, I mostly just want to bang the sleaze out of him and then never tell a soul that it happened. But Post Malone? I don’t particularly want to bang him. I just think it’s great that this weird kid with face tattoos and a permanently-baked vibe is out here, making consistently great pop music. Post Malone (real name: Austin Post) covers the Spring/Summer issue of GQ Style, and he’s just sort of a melancholic sadboy, but also legitimately charismatic and clearly a cultural omnivore. You can read the full piece here. Some highlights:

His brand is ‘cheap thrills’: Along with Bud Light, his sponsors have included Crocs, which has created limited-edition Post-branded clogs, and Doritos, which used Post Malone to help publicize its Flamin’ Hot Limón chips.

He calls his music ‘sh-tty’: “I don’t think my songs are sh-tty. I worked real hard on them. But I think that’s a way for me to say, ‘Not everybody’s going to like your sh-t, and there’s a lot of people who don’t like your sh-t, and it’s okay.’ A little self-deprecation goes a long way.”

He used to get high: But he says he quit smoking marijuana after a pot-induced anxiety attack that never completely subsided. He now likes to consume nothing stronger than alcohol.

He’s not a pretty boy: “I’m a ugly-ass motherf–ker,” he says—and he suggests that his face tattoos might be a defensive strategy. “It does maybe come from a place of insecurity, to where I don’t like how I look, so I’m going to put something cool on there so I can look at myself and say, ‘You look cool, kid,’ and have a modicum of self-confidence, when it comes to my appearance.”

He always wanted to be a hip-hop star: “I so badly wanted to be like Mac [Miller] and Travis [Scott] and [A$AP] Rocky… Finding my own identity in the whole thing was—I don’t want to say difficult, but it was a process for me. I’m 24. It’s time for me to give back and show appreciation and do whatever I can to show that I’m grateful to be able to do what I do.”

His imperfect voice: “You don’t have to sing good. You just got to be f–kin’ real about it. It’s like David Byrne said: ‘The better you sound, the less people will believe you.’”

He likes to shop & he loves guns: He already owns a Rolls-Royce Phantom, a Lamborghini Aventador SV, a McLaren 720S Spider, and a Bugatti Chiron, which he bought last summer, for around $3 million. Like most pop stars, he has an enormous closet where his footwear collection is carefully arranged: sneakers, Crocs, cowboy boots. Unlike some pop stars, he also collects firearms. Half a dozen were laid out on a bar counter, including a few rifles and a SilencerCo Maxim 9, a handgun with built-in noise suppression. He describes these weapons as toys—“grown-up Legos,” he calls them—but he is also fascinated by mayhem, and mindful of his own security.

He’s always had a melancholy streak: “Middle school, I would cry myself to sleep every f–kin’ day. High school, the same thing. I tried to drink some beers to get rid of that sh-t, but it just never goes away. And I don’t think that’s anybody’s fault; it has to do with something predisposed in you.” Post has decided to talk more explicitly about the importance of mental health, even as his own remains a work in progress. “I’m f–kin’ crazy. And it has exacerbated over the past years, since Stoney.” Like many musicians, he worries that if he found an effective treatment, his music might suffer. But he knows, too, the risks of self-medication. When asked whether he was getting help for his own mental health problems, Post was vague. “I am, now—I’m trying,” he said. “It’s difficult. Through my songs, I can talk about whatever I want. But sitting here, face-to-face, it’s difficult.”

The gun thing freaks me out, no lie. He lives in relative seclusion in Utah, with a garage full of expensive vehicles and a table full of automatic weapons. And he drinks a lot and he’s sad a lot of time. It’s just a terrible combination. I think I always knew that Post was kind of a sad-sack – you can tell from his lyrics – but I don’t think I really understood until know that he’s struggled with his mental health since he was just a kid. And yes, the drugs (which he swears he isn’t doing anymore) and the liquor are self-medicating. The guns are part of his paranoid tendancies too and someone needs to clear them out. Also: I think he would be nice looking without the face tatts, honestly? 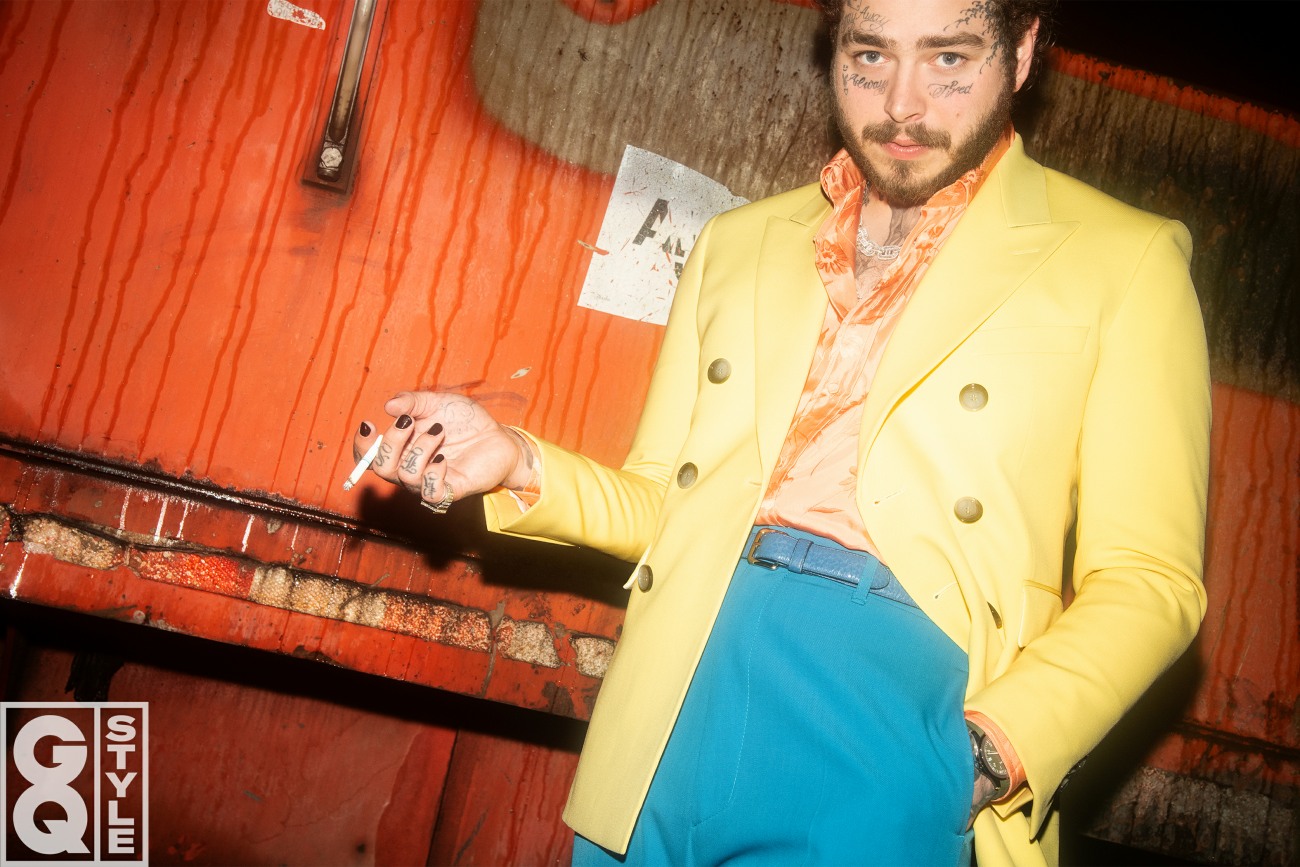 27 Responses to “Post Malone explains his face tattoos: ‘It does maybe come from a place of insecurity’”