Sofia Richie, nepotism model: ‘It’s hard branching out into my own person’ 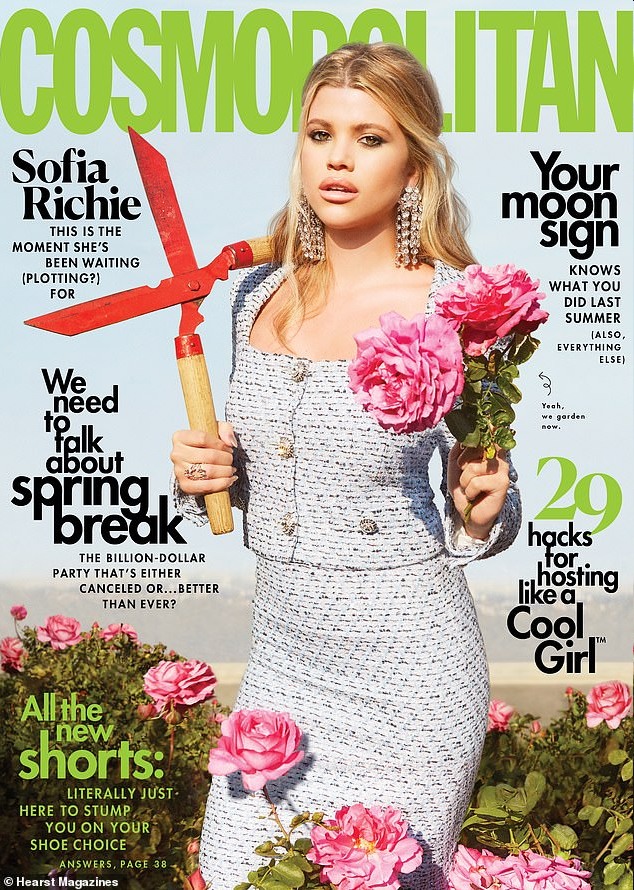 I want to be like “Sofia Richie is harmless,” but then I ask myself: is she? She’s the daughter of Lionel Richie, she’s part of that set of nepotism models/personalities, she seems dumb as a rock, she goes to Hillsong, and she’s dating Scott Disick, a grown-ass dude with issues who is 15 years older than her (she’s 21). So, is she harmless or is she actually quite annoying? I’ll be real: Sofia’s Cosmopolitan cover story plucked my last nerve. She’s trying to transition from Instagram influencer/model/Disick girlfriend to… actress and businesswoman. Her big idea is to make bikinis and somehow, some way, become an actress. You can read the full Cosmo piece here. Some highlights:

She doesn’t want to “model” anymore: “A lot of people just become models because they’re influencers. We would all get the same jobs, be in the same space, and be labeled the same thing, and I hated it. It made me step back and be like, Okay, I’m a creative individual and I want to be smart, start my own businesses, do something I can do on my own, and not be attached to other people.”

She’s starting a bikini business: “I love bikinis… I feel like my following is always fascinated by the bikinis I’m wearing.”

2020 is the year of hustling: “It’s time to start hustling. 2020 is about no fear, and I’m doing things that would usually make me very uncomfortable.” This includes eventually expanding her collection into a full-on fashion line and launching a beauty company (she’s quick to clarify that it will be hair and body, not makeup), a YouTube channel, and an acting career.

She wants to act too: “I was too scared to fail, and that was the reason I didn’t do it before. This year, I’m not scared to fail. I don’t think there’s necessarily failing. It’s just learning and growing.”

She used to have severe anxiety: “I feel like there’s a space for me to talk about mental health, having dealt with severe anxiety. It was zero-to-a-hundred panic attacks… [brought on by] stupid things, like not having a water bottle in the car or getting stuck in traffic.” She went to doctors, but every single one tried to put her on prescription drugs, which she refused to take. “I read a lot of books, and once I figured out what I was doing to myself, I learned how to control it. I would convince myself that I was panicking or that I wasn’t comfortable, and once I realized that I was doing that to myself and nothing was actually wrong with me, I was totally fine.”

On nepotism: “When things were first starting. I was discouraged because everything I did was ‘Lionel Richie’s daughter.’” She stops and clarifies: She’s grateful—she wouldn’t be where she is without him—“but it’s hard branching out into my own person when I have such a powerful artist as a father. My dad was always like, ‘Once you find your thing, you’ll move away from that,’ and I feel like over the past couple of years, I found my lane in life to go the direction I want to go.”

On her relationship with Scott Disick: She says she has “this weird thing where I just don’t care what people think.” The sh-t-talking she and Scott have endured “doesn’t bother me because I’m very happy. Why would I let someone from the middle of nowhere ruin that for me?”

Getting along with Kourtney Kardashian: “I mean, just be nice. There’s no reason not to be nice.”

It’s worth noting that, from what I understand, Sofia hasn’t actually DONE anything. She’s not actually promoting a launch of her new bikini line or anything. She just agreed to a Cosmo cover to whine about how she doesn’t feel like modeling anymore and she’s vaguely going to, like, design some bikinis or whatever, ugh, she’s so bored now, can’t someone else do it?!? That’s what it feels like. Also: “Why would I let someone from the middle of nowhere ruin that for me?” Oh honey.

“2020 is about no fear, and I’m doing things that would usually make me very uncomfortable.” — @sofiarichie on expanding her swimwear collection into a full-on fashion line, launching a beauty company, a YouTube channel, and an acting career. pic.twitter.com/0ZT3L8tmYk

“I want people to know that I have a lot of ambition to work hard…I want to be known for the great things that I do in my life.” — @sofiarichie pic.twitter.com/zuSUhAj136

Cover and photos courtesy of Cosmopolitan.

49 Responses to “Sofia Richie, nepotism model: ‘It’s hard branching out into my own person’”