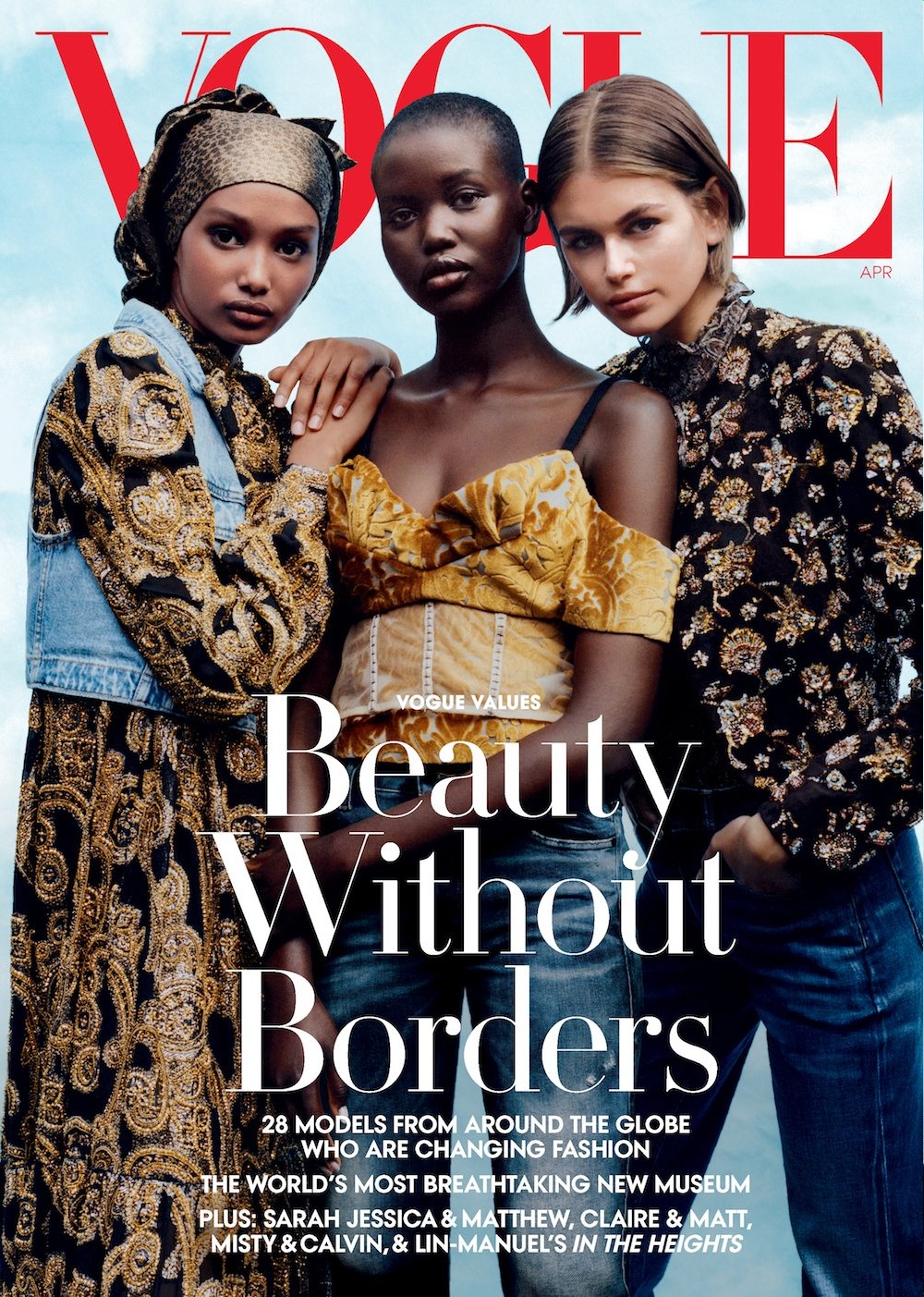 Vogue Magazine’s April cover was slightly unexpected. Anna Wintour devoted an issue to “Beauty Without Borders,” or the idea that the fashion industry could embrace multicultural fashion and multiethnic models instead of, you know, just tossing the same old 14-year-old white children down runways and declaring them to be the new It Girl. That being said, Kaia Gerber’s inclusion on the cover makes me think that Vogue is winking at all of those people who want to see the same old white faces on runways. The other cover models are Adut Akech and Ugbad Abdi.

I looked through the cover package – you can see it here – and while I applaud this slow movement to embrace models of color, obviously there are still some blind spots. There’s only one “curvy” model featured in the package, Paloma Elsesser, because while fashion will play around with having brown and black models, those models still need to be very young (that’s the most important thing) and very thin (also super-important). Anyway, here’s Kaia’s little write-up:

The fact that young voters are poised to play a crucial role in shaping the outcome of the 2020 elections is not something that’s lost on Gerber. “With all the information that’s out there, we can’t claim ignorance anymore,” says Gerber, who turned 18 last September. “My generation sees it as their duty to educate themselves, to speak up—we won’t be silenced by anyone.”

Gerber’s already thinking hard on her candidate of choice, a political awakening sparked when she attended the March for Our Lives rally in Los Angeles two years ago. Her very public stance on gun control prompted an emotional outpouring of support on social media. “We have ways of communicating with each other now that we didn’t have before,” says Gerber, whose Instagram following is over five million strong, exceeding even that of her supermodel mother, Cindy Crawford. “When you have a big platform, it seems irresponsible not to use it for good.”

Honestly, I do worry about the youths and their politics. I come from a generation which was politically educated by MTV’s Rock the Vote, Henry Rollins, Riot Grrls, and Bill Clinton’s presidency. We didn’t have social media or all of these niche political echo chambers (well, to the extreme that is these days). So yeah, while I rolled my eyes at what Kaia was saying, I believe she was saying it earnestly and that she really hopes teenagers are getting involved this year. (So far, they haven’t been involved in the primaries hardly at all.)