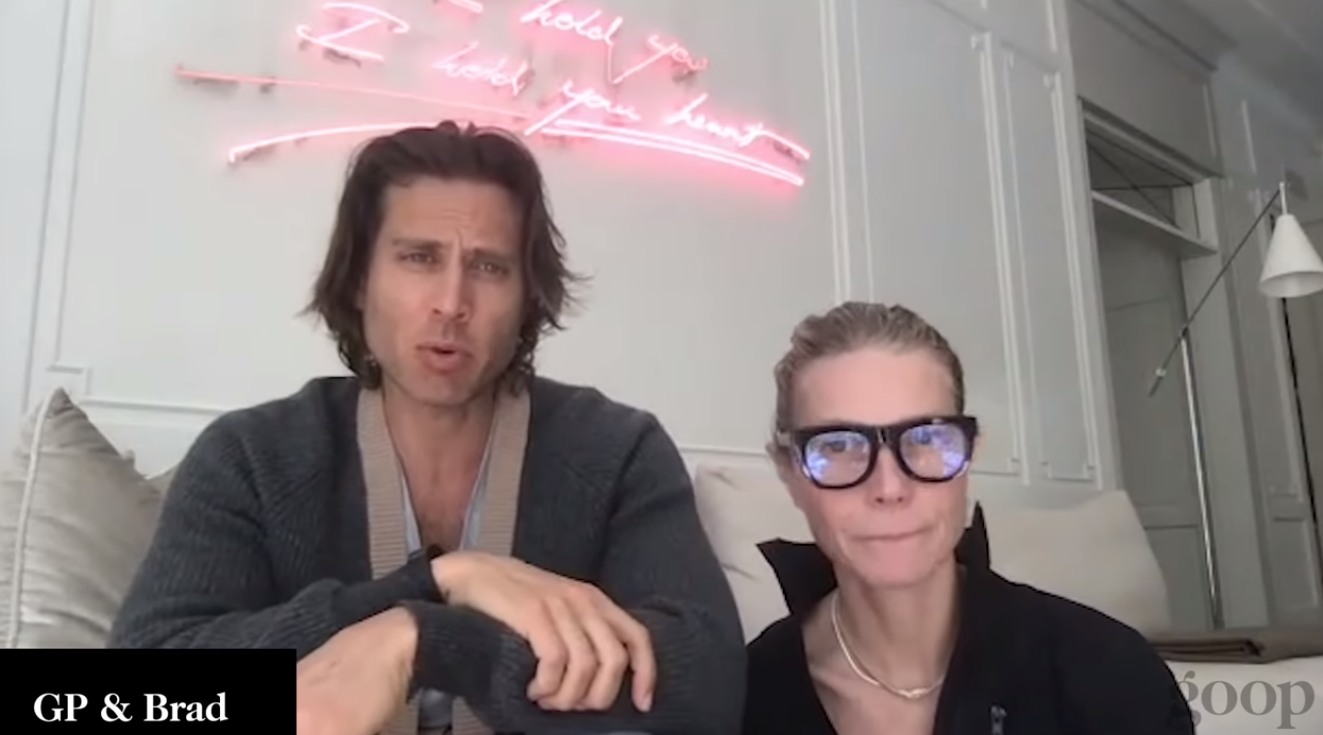 I honestly tried to watch this video, but I found Brad Falchuk’s voice so grating, I had to turn it off. Brad Falchuk is perhaps better known as Mr. Gwyneth Paltrow, not to dismiss his own separate career achievements (he’s a writer/producer), but most people do know him as Gwyneth’s husband. I don’t think I’ve ever heard his voice before now and YIKES. Why was I trying to watch this video? Because Gwyneth and Brad did a video-conference session with an intimacy coach. This is for Goop’s YouTube content, and it has a quarantine theme – basically, Gwyneth and Brad want to know why they (or couple like them) may be struggling with quarantine sex issues. Here’s the video:

Gwyneth spends time asking questions about how to deal with your partner in quarantine while also dealing with your kids, who are constantly around. Some highlights via the Daily Mail:

Gwyneth on quarantine life: “We’re lucky that we have a really solid relationship but we’re also in the house with the kids and it’s pretty close quarters. I think we all feel, especially my teenagers right now, are feeling really pent in. – especially Apple who is a really social creature. We’re really following the strict guidelines so she’s not able to see people she usually sees, so it gets fractious in moments. So there’s definitely tensions in the house, and we have the added dynamic of step-parent, and I think there is quite a lot of stress that comes from trying to recalibrate to this new normal and new level of proximity.’

On intimacy with Brad: “As a couple it’s sort of like, “Where do you go as a couple when you’re all in the house and you’ve got dogs, and work, and work from home”. It’s like, “What are you supposed to do?”‘

On women not feeling sexy during quarantines: Gwyneth asked Michaela what she was telling her clients who were being ‘resistant to intimacy’ during lockdown. Gwyneth added she had ‘a friend’ who wanted her to ask Michaela what to do to cure a feeling of being non-sexual due to anxiety over the coronavirus chaos. The actress said: ‘I had a good friend who follows your work and knows we are going to speak today. She asked me to ask you… she’s having a real hard time feeling sexual and it’s not usually an issue but during this time she’s having really hard time with it. She said a couple of her friends are also having this. What do you recommend for women to get back in touch with their sexuality?’

Michaela said most women are going into survival mode: ‘Most women I’ve talked to are not feeling very sexual… the female body when put under stress goes into survival mode. Food, comfort and eating sweets to up the body fat; most women are reporting these are the things they want to do. They don’t want so much pleasure. Opening to pleasure leads to all others sorts of emotions. It’s fairly normal for women to have emotional response in the context of sexual pleasure and orgasm, crying, even anger things like that.’ She added that in a few weeks ‘boredom will kick in’ and the need to seek pleasure will come back. She advised people to ‘engage with their senses’ and remember to indulge in ‘self care, beauty, which isn’t frivolous at a time like this, dressing in ways that feel particularly good and making the extra effort.’

I know this intimacy coach is being paid to tell people really obvious things, but I still found the “survival mode” stuff interesting and probably quite true – it’s obvious that a lot of us are gaining weight right now, because of lack of gym access and complete access to all of our quarantine snacks. But the weight gain is probably an animal response too, that part of our brain which is like “oh no, we need to store up some fat in case our food supply gets cut off in a month.” It’s probably true? As for sexual intimacy… I mean, I go back and forth. I think there are two types of people: people who get horny during quarantine and people who don’t. It just happens. Last thing: Gwyneth’s unnamed “friend” was just Gwyneth talking about herself, right? 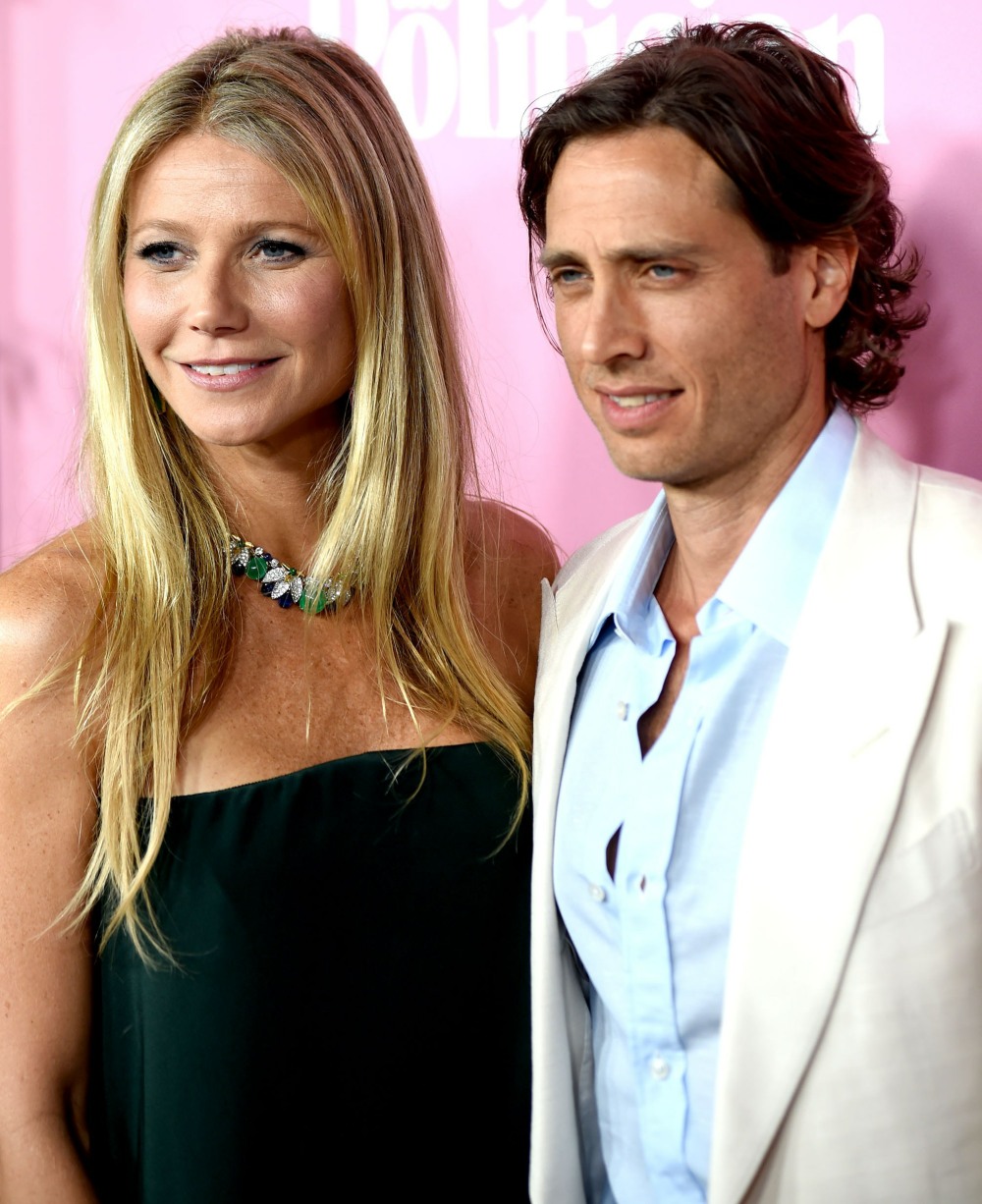