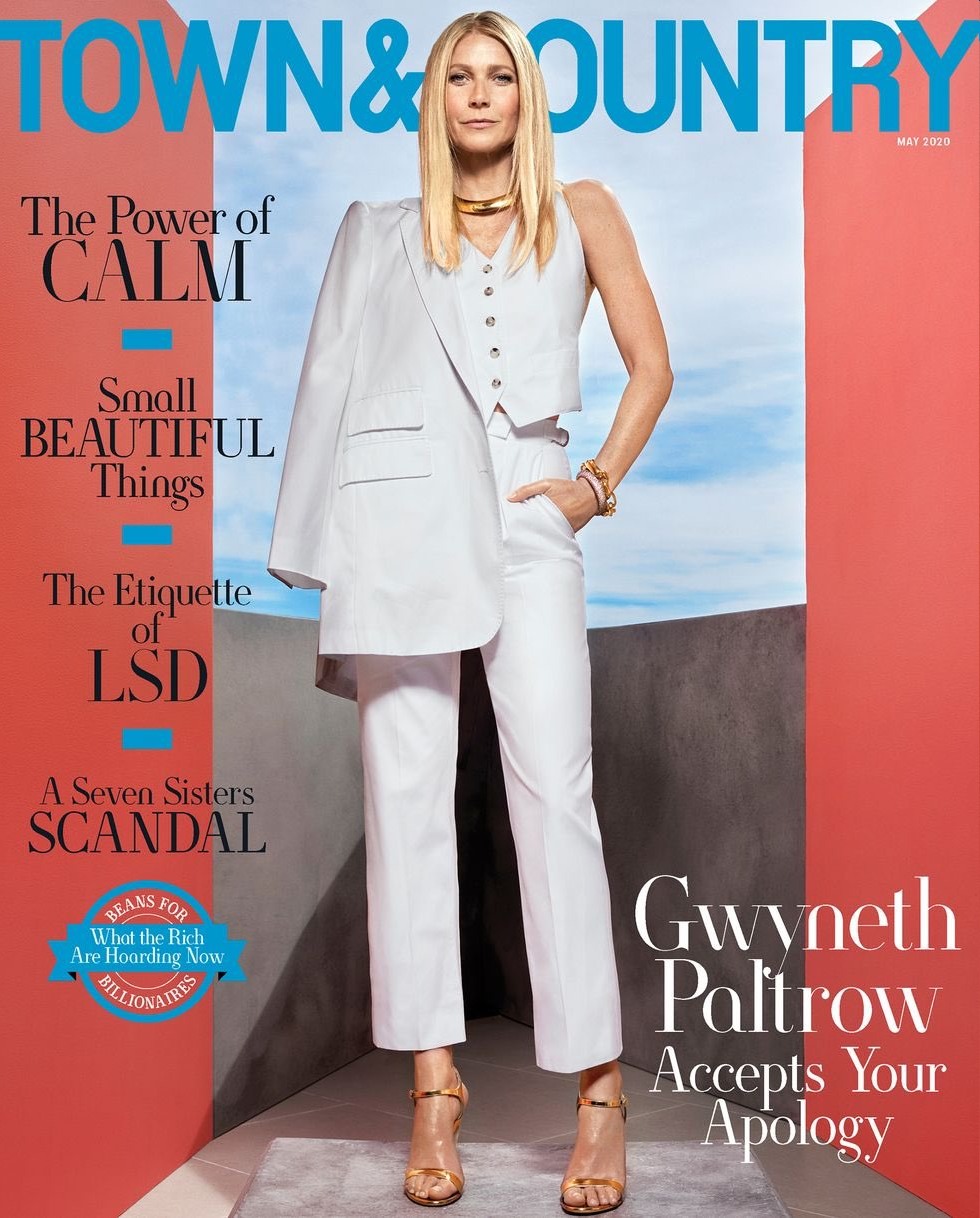 First of all, is there a more “Gwyneth Paltrow” cover line than “Gwyneth Paltrow Accepts Your Apology”? It perfectly encapsulates Gwyneth’s entire smug deal. “Gwyneth, you’re a straw-haired narcissist shilling fake science to gullible rich women.” “Thank you, I accept your apology,” she replies in that nasal Valley Girl accent. Gwyneth covers the latest issue of Town & Country, in an interview which was clearly done before everyone was in quarantine lockdown. T&C actually notes in the cover story that they had to contact Gwyneth post-lockdown to get some additional quotes, and those quotes have a completely different f–king tone than the smuggery and fake science in the rest of the piece. You can read the full cover interview here. Some highlights:

She invented walking: “Walking is my new thing. My best mom friend out here is a real walker. She was living in Hong Kong with her banker husband, and I was in London with my musician husband, and we moved to L.A. after having been expats for a long time. She started taking me on walks.”

She worked her way into nightclubs while still underage. “What we figured out was that the more upscale places would let you in, but if you were trying to get into the Irish bar on Second Avenue, they wouldn’t. We thought we were so sophisticated, talking about Dostoyevsky and cutting school to go to the Met. Margot Tenenbaum, but maybe with less eyeliner.”

She didn’t grow up in a wellness family: “There wasn’t a lot of wellness in the house. My mother was environmentally conscious. She helped pioneer curbside recycling in Santa Monica, and we were the house that had the Hansen’s natural soda.”

Her current wellness routines: A weekly visit to the Class by Taryn Toomey, dance-cardio classes with Tracy Anderson, CorePower Yoga, rolfing, sweating in her at-home infrared sauna, and meditating a little bit every day. She understands that people think she’s naive or lacking in self-awareness because she’s a devotee of so many modalities. “You can keep resisting it, but I’m on the right side of this. I’m watching the market. I’m watching what’s happening. I think what this wellness movement is really about is listening to yourself, tuning into what interests you, and trying things. Find what makes you feel better and go from there.”

She’s a multifaceted snake-oil saleswoman. “What’s silently incendiary is we’re all saying we are more than one thing. Why can’t I get acupuncture and read a scientific paper? I can be intellectual, I can be sexual, I can be maternal, I can be all of these things. I don’t want to unnecessarily move myself from one box to another one. In this society we like our women in one digestible way that we understand, but if you try to be something else, we don’t like it. People couldn’t for a long time believe that I was running a company, until they heard me say, ‘I’m giving up acting. I’ll never be onscreen again.’”

She brags about triggering people: “The people who are triggered by me—‘I don’t like her because she is pretty and she has money’—it’s because they haven’t given themselves permission to be exactly who they are.” Goop is about allowing its fans to “ask whatever question they want, to live their lives exactly the way they want to live them, to be empowered to have difficult conversations and to be direct,” Paltrow says. And that is why the criticism doesn’t bother her. “It doesn’t mean anything to me, because it’s not about me. It’s about what I represent, and that’s about you.”

Her critics, myself included, have never said “I don’t like her because she is pretty and she has money.” Her critics say she’s a smug, name-dropping, pretentious a–hole who shills unhealthy “wellness” cures like stickers for cancer and jade vadge eggs to gullible women. Gwyneth is actually claiming that people don’t like her because she’s “pretty” and “rich.” I just-

As for what she said post-pandemic, it was just some sh-t about “metabolizing fear” and donating to the Frontline Responders Fund and/or ordering some Goop Glow products. If you do buy Goop Glow or G.Label products, she’s donating 25% of the profits to the FRF. Remember when everyone screamed at Kim Kardashian for doing something similar with her SKIMS line? I wonder if Gwyneth will get the same shade.