Jennifer Garner: ‘I can’t wait to see my kids have a big, old germy sleepover’


Embed from Getty Images
I just want to express my gratitude to all the print outlets bringing us content at this time. People especially has been stepping up and they’re even asking celebrities to give them video segments from home. Their “most beautiful” issue is chock full of good quotes, and I wanted to talk about Jennifer Garner’s interview. She was the most beautiful last year, remember? (Wouldn’t it be great if People featured more women of color on their cover? They could have done a joint cover this year with Regina Hall and Regina King, they’re both 49! To be fair People has been trying somewhat, but I digress.) Anyway Garner gave them some quotes about how her kids are coping and adjusting.

Jennifer Garner… has been most impressed with “how quickly we all adjusted in a way,” Garner tells PEOPLE in this year’s issue.

But [she] still looks forward to “seeing my kids hug their friends,” she says of son Samuel, 8, plus daughters Seraphina, 11, and Violet, 14: “I have a deep need to see my girlfriends, but I can’t wait to see my kids have a big, old germy sleepover and just be kids.”

She’s also using their time at home to teach her young children the basics when it comes to cleaning. “When I was coming up through the ranks, I scrubbed bathrooms in theaters from one side of this country to the other,” Garner recalls. “I always somehow ended up on bathroom-scrubbing duty.”

“So it’s nice to see my kids learn these things,” she adds. “I’m so proud of kids everywhere and how flexible they’re all having to be and how they’re all rising to the challenge.”

The biggest challenge for Garner has actually been finding a little time for her own self-care.

“Last night I finally gave myself some kind of halfhearted manicure,” she tells PEOPLE. “I can’t say that I’ve showered every day but all the facial and hair masks that are in the drawer are finally coming out and being put to use…

Garner has also been inspired by the acts of kindness she has witnessed during the crisis and finds hope in “just the enormous love that people have for each other.”

“All the people who are giving us the luxury of being able to stay home, because they are stocking grocery stores and cooking in restaurants, and working in hospitals,” she says. “All of these jobs that are so important, are truly the fabric of society. And they’re doing them. It’s just so brave and generous.”

If everyone “can do that for each other,” adds Garner “then we have to be okay.”

I am so grateful that I have a teenager with me instead of small children that need that much more attention and care. Sometimes we bicker but it’s going pretty well overall. I know that sounds obnoxious and like I’m removed from the everyday realities of dealing with small children because I am. I’m trying to show a teenager how to clean the bathroom every week.

I know what Garner is saying and she deserves credit for telling people to stay home and for thanking the people working now. The thought of little kids hanging out and swapping germs at this point skeeves me out. I can’t say I’m excited to be around other people again. It grosses me out on some level and I’m still scared about it. Remember how, during the AIDS crisis, we were told that we were having sex with every person our partner had sex with? I think about that all the time now, except just by touching someone or standing within six feet of them it’s like we’re making out with everyone that’s been within six feet of that person.

Garner and her girls stepped out with their cat in a stroller last week. She was carrying some kind of list. I wonder if she was doing a scavenger hunt or something. 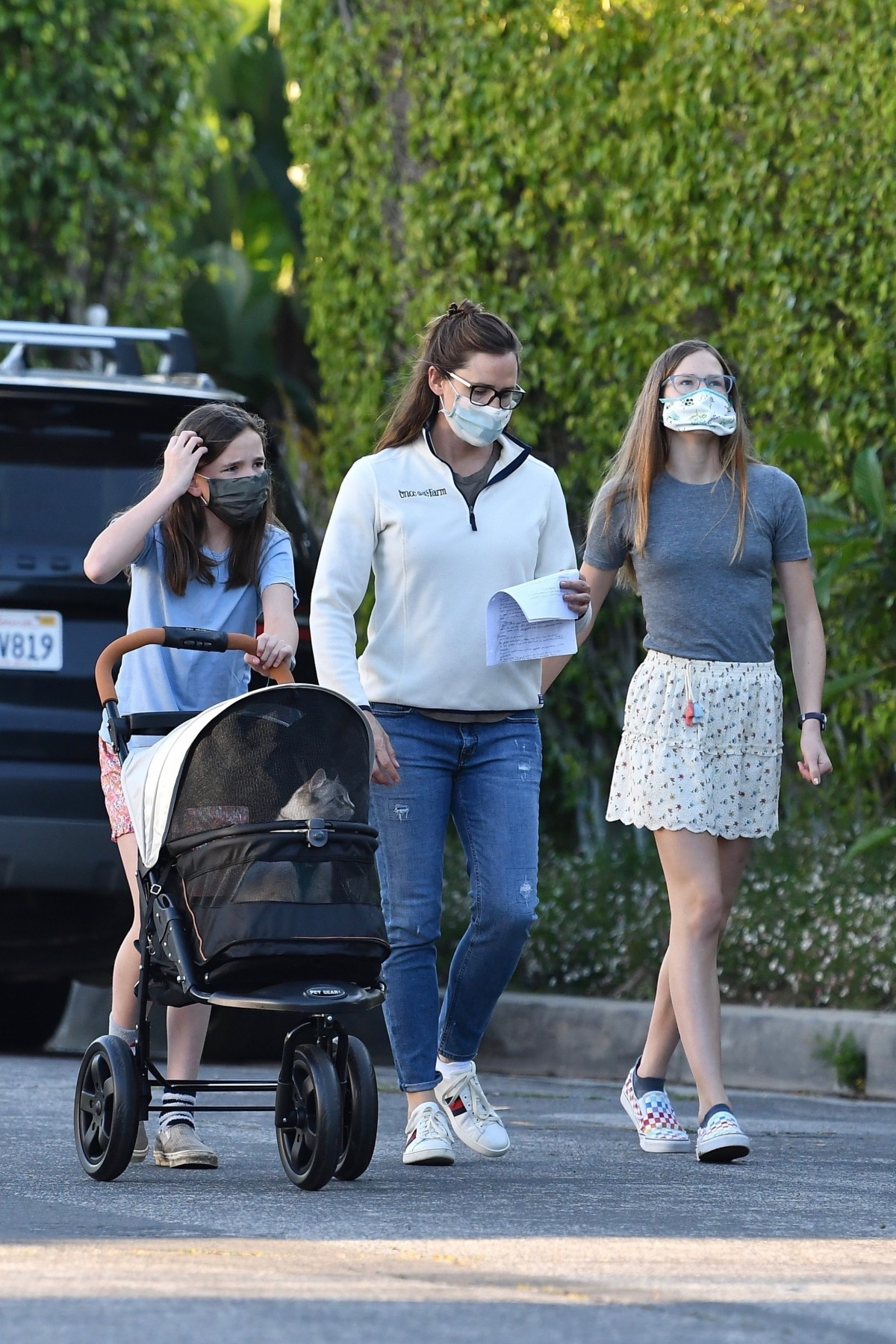 I’m going to try this English muffin recipe! I was able to score yeast, I’m so sorry to those of you who can’t find it.

At the top of the comfort food list around here: @huckcafe’s Homemade English Muffins. There is a fresh batch quickly disappearing from my counter and I thought you might like them, too. I am reposting my own #PretendCookingShow (is that even allowed?) I was thinner then, but am happier now. 😊 (Quarantine note: if your pantry looks sketchy— milk with vinegar/lemon juice = buttermilk. And All-Purpose flour works A-OK here.) XXX P.S. why the obsession with protecting yeast? I’m so sorry. 🙈♥️ . Huckleberry Cafe’s English Muffins recipe (by @zoenathanloeb): 3 cups buttermilk 2 Tbsp active dry yeast 3 Tbsp unsalted butter 3 Tbsp honey 6 cups bread flour 1/4 cup sugar 4 1/2 tsp kosher salt 1 cup cornmeal . 1. Warm 1 1/2 cups buttermilk in saucepan, but do not boil. Place remaining 1 1/2 cups cold buttermilk in bowl of stand mixer with yeast and whisk to combine. Add warm buttermilk to cold buttermilk mixture and whisk to blend. Add butter, honey, bread flour, sugar, and salt and mix on low speed with dough hook for 1 min, until dough comes together. Increase speed to med-high and work dough for about 2 mins until smooth. . 2. Transfer dough to greased bowl, cover with plastic wrap, refrigerate for 1 hour. . 3. Sprinkle 1/2 cup of cornmeal on a clean work surface and dump dough onto it. Sprinkle 1/4 cup of cornmeal on top of dough and flatten into a disk with 1 inch thickness. . 4. Sprinkle last 1/4 cup cornmeal onto a sheet pan. Cut English muffins from the dough with 3 inch round cutter. Cut them as closely as possible, minimizing the amount of scraps — you cannot combine and reroll this dough. 😬 . 5. Arrange muffins, 1 inch apart, on sheet pan. Allow to rise for 1 hour at room temperature, or refrigerate overnight and allow to rise for 1 hour in the AM. 🙋🏻‍♀️ . 6. Preheat oven to 350°F. When oven is hot, heat ungreased griddle or large cast-iron pan over med-high heat. Jen tip: 275°F for the temperature of your griddle! . 7. Drop muffins onto griddle for about 1 minute on each side, until golden brown. . 8. Return muffins to sheet pan and immediately bake for 8-10 minutes (I find closer to 12 mins for me! 🤷🏻‍♀️), until they feel light. . 9. Yum! So yum.

21 Responses to “Jennifer Garner: ‘I can’t wait to see my kids have a big, old germy sleepover’”