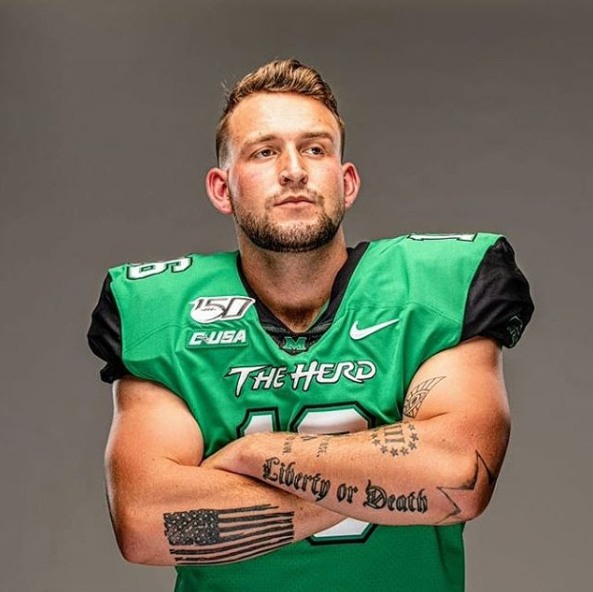 Here are some photos from Justin Rohrwasser’s Instagram. I grabbed them because I’m afraid he’ll delete these photos, or perhaps just delete his Instagram entirely, but for now, you can see his IG here. Justin is a football player and just days ago, he was drafted to the New England Patriots. He was selected in the fifth round of the NFL Draft, which was held remotely this year (people still watched). It felt like it was only a matter of minutes after Justin was drafted that people were like “hey, what’s up with his ink?” As you can see in these photos, which he posted to his own social media, he’s been proud of his tattoos for a long time. He often positions his body in photos to show off the ink on his left arm, including the Roman numeral “III” surrounded by a circle of stars. So, what’s up with that?

That tattoo in particular is the symbol for a far-right paramilitary group called the Three-Percenters. You can see the wiki page on the group here. The Southern Poverty Law Center does not have the group designated as a hate group, but they definitely seem hate-group-adjacent. Three-Percenters are anti-government, pro-gun and shady AF. And now one of their guys is part of the New England Patriots? Well, Justin must have realized that corporate sponsors don’t actually want to look like they’re cozying up to far-right extremists, because he’s now apologizing and saying that he’s going to remove the tattoo. But how will he remove his beliefs which led to the tattoo?

New England Patriots draftee Justin Rohrwasser says he plans to remove his controversial tattoo that reportedly relates to an anti-government right-wing group. Rorhwasser, a kicker whom the team selected in the fifth round of the NFL draft Saturday, told CBS Boston — WBZ-TV — in an interview published Monday that he was unaware of the meaning behind his Three Percenters tattoo. According to USA Today, the Anti-Defamation League classifies the Three Percenters as an “anti-government” organization. The group says on its website its goal “is to utilize the failsafes put in place by our founders to rein in an overreaching government and push back against tyranny.” Rohrwasser’s ink depicts the Roman numerals for three, III, surrounded by stars. He got it inked on his left arm when he was 18 years old.

“The first time I found out what it was linked to was Saturday,” Rohrwasser, 23, told CBS Boston. “As soon as I saw what it was linked to on Saturday, at exactly that time I knew I had to get it totally taken off my body,” the athlete said. “I said cover it up but I want to get it removed from my body. It’s shameful that I had it on there ignorantly.”

Rohrwasser explained that the tattoo “was described to me as the percentage of colonists that rose up against the government of the British.”

The athlete profusely apologized for having the controversial ink on his arm.

“I’m sorry for all my [friends] and family that have to defend me,” he shared. “Putting them in that compromising position is one of the biggest regrets I’ll ever have. To them I’m sorry, and I’m going to learn from this. I’m going to take ownership of it… No matter what, that’s not who I am and hopefully you all will find that out.”

I just… don’t believe him. I think the only thing he’s being somewhat honest about is how he never really questioned what was being fed to him by the (right-wing nut-job) people around him. He was likely raised in a family and an environment which was all about how “the government” infringed on white people’s rights to be armed with weapons of war while shopping at WalMart. And he thought “yes, I’ll get that tattoo, sign me up!” Anyway, lasering that sh-t off if going to take a while. The Undefeated did a good piece on how Justin’s current story invites further examination too – go here to read. 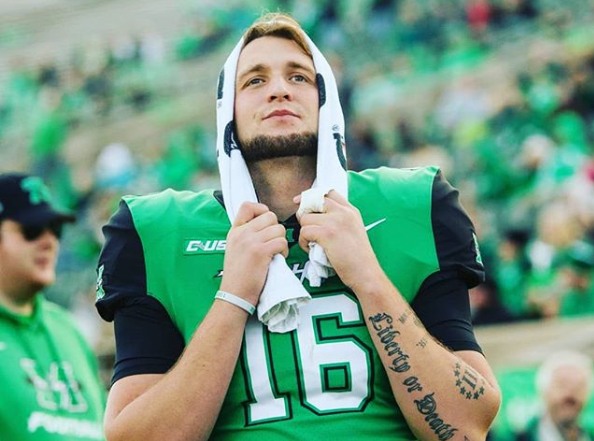 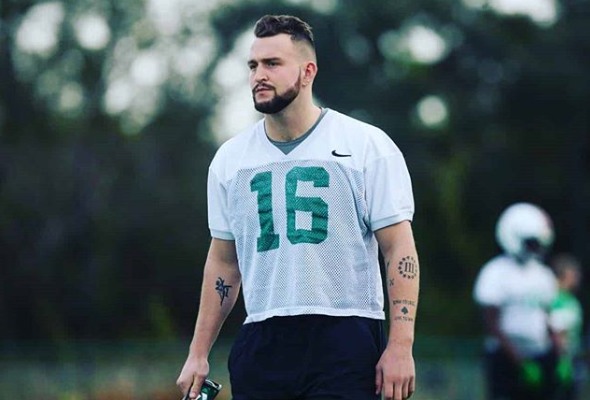 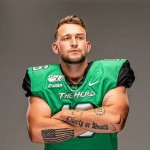