Gov. Gavin Newsom calls those who packed Southern California beaches over the weekend an example "of what not to do."

"The virus doesn't take weekends off. This virus doesn't go home because it's a beautiful sunny day." https://t.co/mEkhW0Yrvw pic.twitter.com/fbnhNw7LHv

I know everyone is madly in love with New York Governor Andrew Cuomo and I have much respect for his reaction to his state in crisis. I’m joining the fan club for my own governor, Gavin Newsom. When this is all said and done, studies on preventative measures will look to Newsom. Not just his stay at home orders but how he used his authority, how he formed coalitions with other governors, and how he worked with them to distribute desperately needed PPE and medical equipment. Newsom was one of the first governors to mandate strict Safer At Home measures. Plus, he personally visited essential businesses to make sure they were not a danger to themselves or others. As a result, California is bending the curve. with the largest population the US, almost 40M, our death rate is 5 in every 100,000 people, comparable to New Hampshire and Iowa.

Gov Newsom is a democrat who served under a stalwart democrat before him and California has some very red pockets. Earlier this month, a bunch of Give Me Liberty or Give Me Death types protested in Huntington Beach, arguing that they would prefer to die than keep their local Chipotle closed. Of course, they made these points through face masks and other PPE so, you know – not totally okay with the dying part. Huntington Beach is in Orange County, although it’s changing, and there are some very good people in OC, there are also many conservatives, including a bunch of supervisors who voted to open all the OC beaches given the beautiful CA weather coming our way last weekend. And open them they did:

Orange County supervisors voted to keep the beaches open this week. This is what happened. Do your job. @OCGovCA pic.twitter.com/5yKLT2JKY2

It must have felt pretty good to show ol’ Newsom who’s boss… only they forgot who was the actual boss: Newsom. He wasted no time shutting this nonsense down.

Calling it a “temporary pause,” Newsom told reporters the beaches may reopen very quickly “if we can get some framework and guidelines to get this right.”
Asked about a law enforcement memo that was widely disseminated earlier that said the governor intended to order the closure of all state beaches and parks starting Friday, Newsom said he never saw it.

“That memo never got to me,” Newsom said….

The governor said at a news conference Wednesday that of about 100 beaches along the state’s coastline, about 5% saw large crowds. Orange County and Ventura County beaches were packed with people seeking relief from the heat.

Newport Beach in Orange County saw about 90,000 beachgoers last weekend despite the urging of officials to follow the state’s stay-home order. On Tuesday, Newport Beach’s City Council voted to keep its beaches open, with additional enforcement of physical distancing…

Though authorities in those counties reported that beachgoers largely observed social distancing rules, Newsom chastised beachgoers and warned that defying the state’s stay at home order could delay its reopening.

“This virus doesn’t take the weekends off. This virus doesn’t go home. We have to manage and augment our behavior,” Newsom said Monday. “The only thing that will set us back is people stopping practicing physical distancing.”

When word got out that Newsom was coming for them, Orange County Supervisor Donald Wagner responded:

“I believe Governor Newsom has the power to close Orange County beaches,” Wagner said. “However, it is not wise to do so. Medical professionals tell us the importance of fresh air and sunlight in fighting infectious diseases, including mental health benefits. Moreover, Orange County citizens have been cooperative with California state and county restrictions thus far. I fear that this overreaction from the state will undermine that cooperative attitude and our collective efforts to fight the disease, based on the best available medical information.”

There’s not much to say about this. Obviously, his county’s residents did not cooperate and he selfishly put making a statement over any consideration for the health of the rest of us. I could not be angrier about any of this and yet, sadly, I’m not surprised. Orange County is not the only offender, Coronado beaches in San Diego county were set to open after being the last to close. They were insisting on the same restrictions Hawaii uses: keep moving, no sitting or being stationary on the beach, six feet apart, wear masks, etc. Still, I don’t know that people can be trusted to do what’s right. I’d love to walk on the beach right now, for my mental health, but I can wait. I’m in Los Angeles County and the feeling here is very different. LA mayor, Eric Garcetti, has been as active as San Francisco’s mayor London Breed and our governor. Garcetti is tweeting vital information in multiple languages and gives daily updates, the latest being guaranteed testing. As OC was reopening their beaches last week, Garcetti was citing the importance of keeping up with the Safer At Home measures. He enlisted the help of newspapers and radio DJs to spread the message. As a result, here are shots of LA beaches last weekend:

HELLO FLORIDA,
BEING SMART IS NOT THAT HARD. OK, MAYBE IT IS.

Although, if I am being totally honest, we can’t be totally trusted to do the right thing either, so Garcetti took a few precautions: 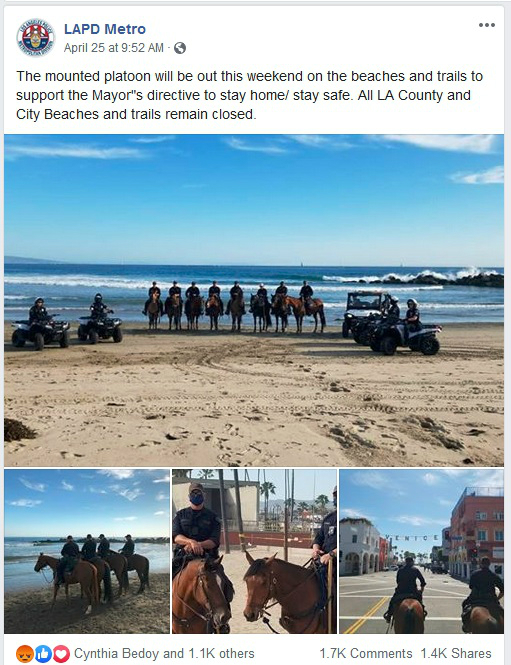 Still struggling to understand "Cuomosexuals" when Gavin Newsom A: has done a far, FAR better job and B: is way better looking. I mean seriously. pic.twitter.com/66SPiifmkA

TODAY: Governor @GavinNewsom will provide an update on the state’s response to #COVID19.