Jimmy Fallon on his at-home show: ‘My wife is the brains behind this whole thing’ 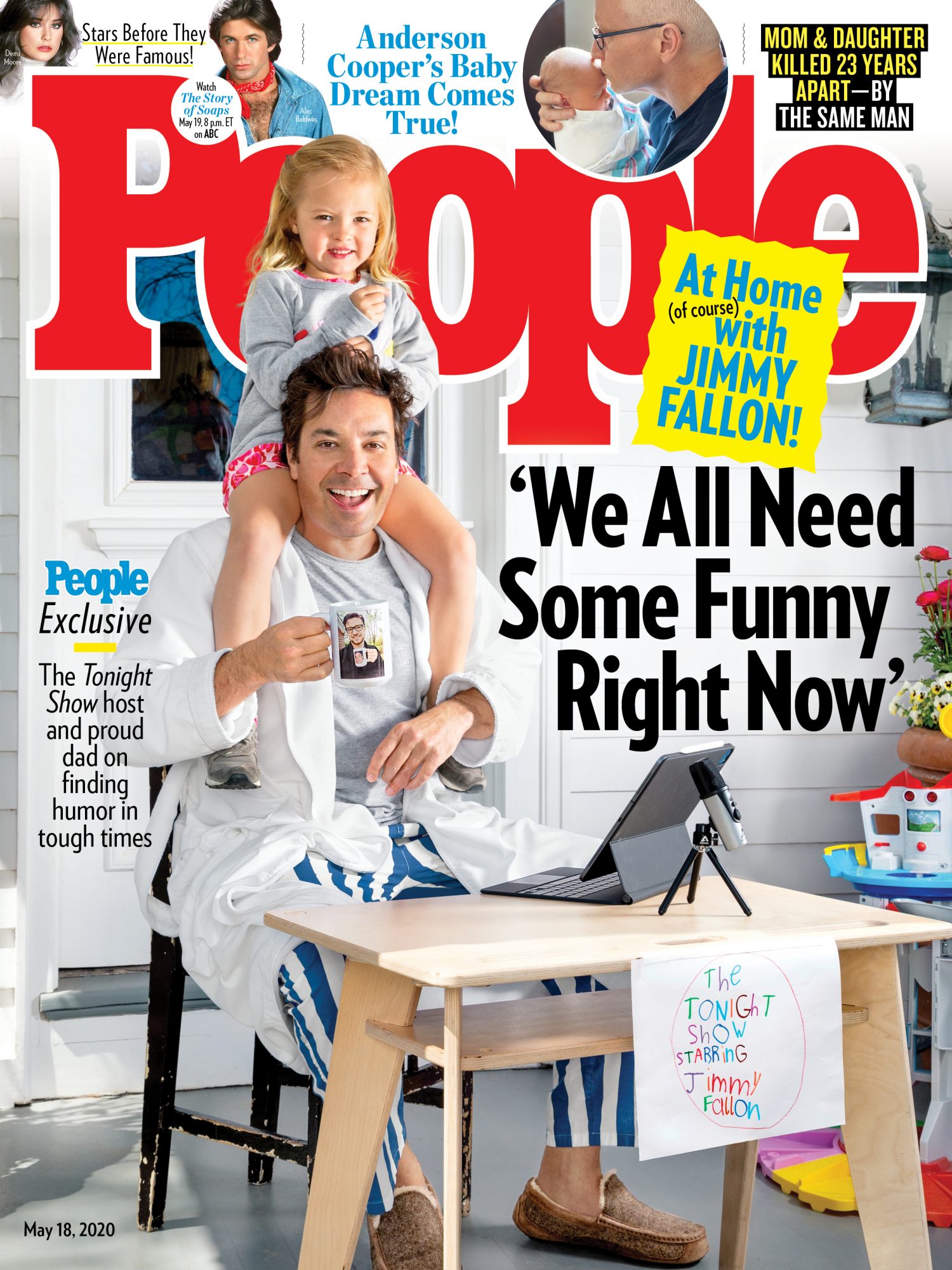 As I keep mentioning, I am so impressed by Jimmy Fallon’s at home show. He has risen to the top of the late night hosts for me during lockdown. Kimmel, Seth Meyers, and other hosts (except Ellen, she’s awful) are rallying and doing a great job too, but I feel like we’re seeing a deeper side of Fallon. He has such a warm personality and you really get the sense that he cares about his guests. He tells the celebrities he misses and loves them, his little girls interrupt him and he’s patient with them, and he films from almost every room in his crazy house. Plus his monologues are still funny. You can tell he’s got a great team behind him, and of course his band, The Roots, are still working from home too. Fallon had Questlove interview The Beastie Boys! Questlove geeked out about it, and it was a joy to watch. The real brains behind Jimmy’s show, and I think the reason his show is resonating with so many people, is his wife, Nancy Juvonen. Nancy recently opened up in a Q&A segment about their years struggling to conceive. She’s been Fallon’s camera operator and she helped him pivot his show right when lockdown started in mid-March. Of course she’s a seasoned producer and writer and it really shows!

Jimmy and his youngest daughter, Frances, 5, are covering People Magazine, and he gives credit for his at-home success to Nancy. They also have daughter Winnie, 6.

On Nancy being the brains behind his show
“My wife is the brains behind this whole thing,” Fallon tells PEOPLE in this week’s issue, on stands Friday. “She’s the production scout, the producer, the lighting person, the editor, the director. I could not do any of this without my wife. She is everything.”

She also inspired her husband to take a leap of faith and try the show from home, after NBC pulled the plug on the show’s production from its N.Y.C. studios March 13, amidst the coronavirus outbreak.

“It was such an odd day,” Fallon recalls. “People in the office were freaked out, and we said, ‘Look, if anyone is scared, go home. Be with your family.’ And we left right after that.”

Fallon says his memories of coping with the terrorist attacks of Sept. 11, 2001 as a young comedian on Saturday Night Live inspired him to push forward.

“When 9/11 happened, it was such an odd and scary time, and I turned to the late-night guys, Conan O’Brien and Jay Leno and David Letterman,” says the Saugerties, N.Y., native. “Letterman had a really great line that the best thing we could do is be courageous, but sometimes even pretending to be courageous was just as good. I always liked that.”

With that in mind, Fallon called Tonight’s writers and started plotting out a YouTube-only, at-home version of the show. It would have none of the production values — and maybe none of the celebrity guests — of The Tonight Show, but it might just make people laugh. “Sometimes you’ve just got to go with your instincts,” he says. “We all need some funny right now.”

On his daughters interrupting him
“If I’m in a room where they’re close, they’re going to come in. I can’t really blame them,” he says.

“They don’t quite understand what this is,” Fallon says. “They know about coronavirus and that it’s a serious thing and so we have to stay inside. But they’re not aware that I’m broadcasting this to millions of people. So if I have them help me out with a bit, they’re very themselves, which is cool.”

I really like how he explained learning from Letterman that pretending to be courageous is just as good as being courageous. Everyone is also talking about how his daughters have interrupted him during interviews, like when Winnie burst into the room when he was interviewing Russell Wilson and Ciara to tell them that she’d lost a tooth. They were clapping for her! Halle Berry also talked to Winnie about her daughter’s hair, and that was adorable. Fallon will sometimes do his monologue with his daughters, but he hasn’t done that for a while.

The Today Show has more quotes from Jimmy’s interview with People. He told them that he’ll bribe Winnie and Frances if they’re not cooperating during a shoot. If they’re being too silly, I can say, ‘Hey, if you help me out with this, I’ll let you play an hour of the ‘Lego Incredibles’ on PlayStation.’ It’s their favorite thing in the world.” When Jimmy and Nancy do their weekly “Ask the Fallons” walk, I wonder where the girls are. Are they in the car on devices (I would do this honestly) or do they leave them at home for few minutes? Someone should ask them that for the next segment! Their last one was hilarious.

Morning walk: okay, if you won’t look at the camera then I won’t. #teamwork

49 Responses to “Jimmy Fallon on his at-home show: ‘My wife is the brains behind this whole thing’”