Emily Ratajkowski was ‘disappointed’ that Obama ‘got more and more moderate’ 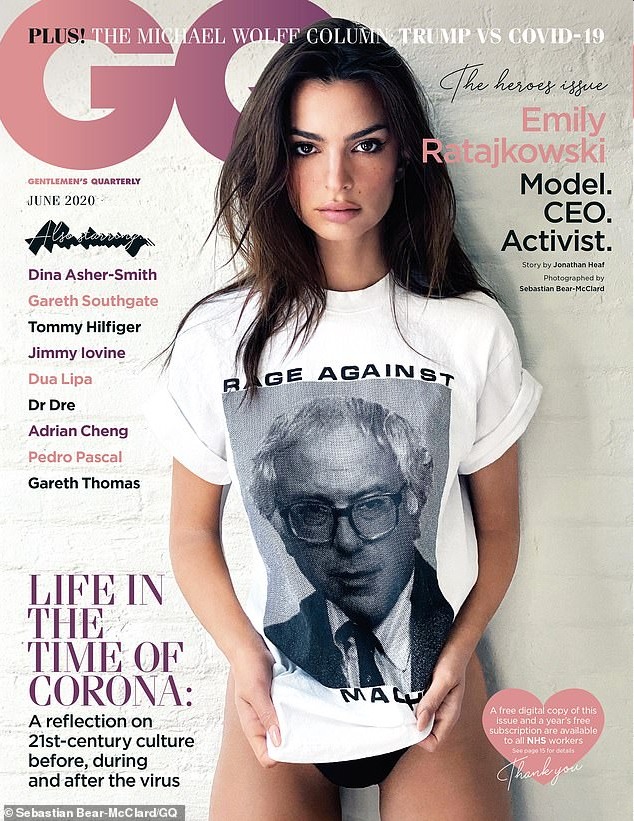 Emily Ratajkowski covers the latest issue of British GQ. She was photographed at home in New York by her husband Sebastian Bear-McClard and interviewed via Zoom. As I’ve said before, I don’t really mind Emily – most people think she’s deep as a puddle, but I find she has more interesting stuff to say than many young “hot” women. She’s spent years trying to make her half-naked selfies into some kind of feminist cause, and she goes on and on about that in this interview too. But the biggest chunk of the interview is reserved for Emily explaining why she’s still pro-Bernie Sanders and why she dislikes the Clintons and how she found Barack Obama too moderate. And I just… can’t. With her platform, with all of this… she sounds like such an a–hole. You can read the full piece here. Some highlights:

On parents living through quarantine: “Parents deserve some sort of medal or trophy at this time. I’m serious. I mean, one of my best friends, I was FaceTiming with her last night and she’d set our wine date for 8.15pm. She has a daughter at home who’s nine, so they have to be in the room to help her with school assignments and so on. Come bedtime and her daughter just wouldn’t fall asleep; she kept coming into the room like, “Mom, what are you doing?” Great birth control, I guess.

She’s writing: “I’m working on a book of essays. I have probably ten. But I’m trying to perfect them; that’s one of the main things I’ve been doing [in isolation]…..Nonfiction. I’d say it’s like a memoir, but with added political thinking. I’m trying to use my experience as a model and someone who has capitalised on their image and also someone who has been maybe a victim of their image. It’s complicated. I am looking at all that through a feminist perspective and just trying to decipher some of the answers. I don’t have them all yet; maybe I never will…The best writing I do is as I’m falling asleep. I take notes on my phone and I will write down anecdotes on a topic. I’ll just write them as they come; a flow of consciousness. And then usually I will look at them the next morning and, hopefully, some of it will make sense.”

She understands how Trump could win again: “This is a thing that my “left” friends sometimes get really mad at me about. My feeling is [Trump’s] re-election prospects are just a response to moderate politics. It’s the same thing that happened with Brexit; the choice to keep things as they are, centre, or vote for change and move to the right. And when you look at most working people’s realities they are interested in “How do I feed my kids?” or “How do I pay my rent?” They aren’t interested in trans rights or trans bathrooms – they are just trying to survive. When a politician comes in and says, “We’re just going to keep things the same; we’re going to keep studying, keep going as we were,” and, well, then “the centre cannot hold”. And that’s the truth. That’s why I think Bernie is so important, to offer a more extreme left alternative instead of this moderate ideology that is just not working for a lot of people. And I think it’s only going to get more extreme. Corona or not, the idea of the 99 per cent versus the one per cent isn’t going to go away. In fact, the failing economy is only going to widen the gap.

She didn’t like how Obama became a “moderate”: “I had been an Obama supporter. That was the first election I ever voted in. I was working in journalism at my high school newspaper and covered it. It was this beautiful moment and I cried, my parents cried and then we watched as Obama’s policies just sort of got more and more moderate. It was really disappointing. When Hillary was the nominee I was like, “OK. She is going be your next president after Obama.” Like everyone, I was so sure of that; there was no debating it. The RNC was a mess. She was our No1 candidate. We had the first black man, now we’re going to have the first woman. It was amazing. But, in truth, I had already felt critical of the Clinton administration and actually, as a woman, had a lot of issues with how Hillary and Bill had handled his problems to do with women. Also, digging deeper, I was not a fan of their policies. So, for me, I never felt an allegiance with the Clintons. When Bernie emerged, it was this really exciting moment. In 2016, I got involved with his campaign. I went to New Hampshire and I spoke at a rally and I met Senator Sanders. That was the beginning of our relationship.

This is going to make me sound ancient (and I do feel that way) but… the kids are not alright. I feel like maybe Americans under the age of 30 didn’t have a great political science curriculum, or they merely didn’t pay attention in all of their government/poli-sci/civics classes? I say this because there always seems to be so much “magical thinking” going on around conversations about Bernie Sanders and “moderate politics.” There are fully grown adults who truly believe that if Bernie Sanders had been the Democratic nominee, he would have magically won the election and been able to wave a magic wand and “fix” everything and turn America into a socialist paradise. And that’s not the way any of this works. And the idea that Obama and the Clintons were too moderate AND what we all need is to turn to hard-left political ideology to combat these moderate politics… I just… there are literally Nazis storming into state capitol buildings. There are literally tens of thousands of people dying because of the way Republicans mishandled everything.

more by husband at home