Matt Damon on spending lockdown in Dalkey, Ireland: ‘It feels like a fairy tale here’ 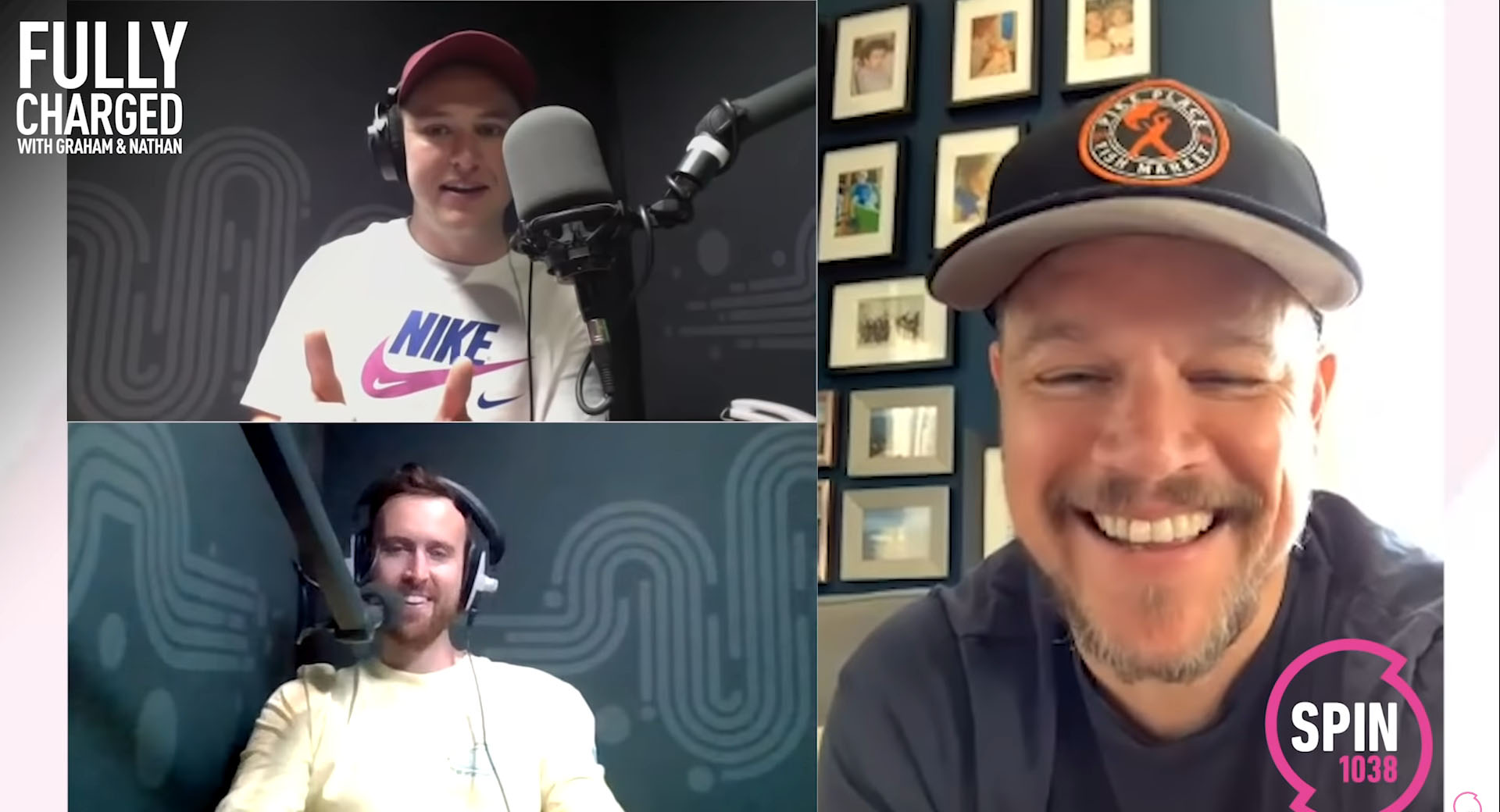 Matt Damon did an interview with an Irish radio station that’s been trying to get in touch with him for over a month. As you’ve likely heard, Matt and his family, wife Lucia and daughters Isabella, 13, Gia, 11, and Stella, 9, have been quarantined in a gorgeous seaside town in Ireland called Dalkey. Matt was filming a Ridley Scott movie there, The Last Duel, in early March right before the pandemic hit. He went viral when a local got a photo of him about to go swimming and holding a plastic shopping bag with his stuff in it. He’s also posed with locals, who are so protective of him they’ve shrugged off facebook requests from New York Times journalists. Both Bono and Enya live in Dalkey and the Irish people pride themselves on leaving them alone. Anyway Damon has been listening to this station, Spin 1038, and his wife and Bono, whom he facetimed, encouraged him to call in. The interview is below and it was a joy to watch. I know he’s been an a-hole in the past but I still like him. You can see it below and here’s some of what he said:

On lockdown in Dalkey
This is one of the most beautiful places we’ve ever been. I’m with my whole family, I’ve got my kids, and we have teachers with us because we were planning on missing school for about 8 weeks, so we’ve got what nobody else has which is actual live human beings teaching our kids, the schools are all shut down back home and all the kids are doing remote learning. So we feel guilty, we’ve got this kind of incredible set up in this place, it’s just absolutely gorgeous. Even in the lockdown, they’re like you’ve gotta stay within 2 kilometres of your house, I mean 2 kilometres of here there’s tress and forests and woods and oceans, I can’t think of any place else you’d rather want to be in a 2 kilometre radius of. Now it’s blooming. I thought it was incredible two months ago, but now it’s ridiculous. It feels like a fairy tale here.

I’m coming back anyway, whenever the world right itself and we’re allowed to go back to work, we still have this movie to make. I’ve got 8 weeks of shooting to look forward to so I have at least a few more months here. Who knows what the world is going to look like? This would not be a bad place to wind up though, we’re really loving it/

His oldest daughter, Alexia, 21, is in NYC and has recovered from covid
Our oldest daughter is in college, obviously that’s been shut down. She’s in New York city and she had COVID really early on along with her roommates and got through it fine so I shouldn’t say our whole family is together, of our 4 kids we’ve got the 3 younger ones and our oldest one, we’ll reunite with her at the end of the month.. But everybody’s OK. Obviously for Lucie’s (Matt’s wife) Mom and my Mom it’s scary for that generation. I think we’ve all got the message now, everybody’s doing the isolation and the social distancing and hand washing, everything we can to mitigate this, We’re going to go back to Los Angeles and she’s (Matt’s eldest daughter) going to come out so we’ll all be together and figure out what the heck we’re going to do. It’s such an odd limbo that we’re all in.

On Irish PM Leo Varadkar working as a doctor on the frontline
You’ve got a president who just goes to the hospital and starts working, I mean what a badass, it’s just on another level.

On Contagion being prescient
Anyone who says we couldn’t predict this – 10 years ago we made a movie just by talking to experts and asking them would this look and go down. The whole thing is tragic and sad. I hope some good can come out of it. Luckily this isn’t as lethal as it might have been.

That’s a huge advantage that he has the girls’ teachers with them, but that’s got to be so hard for them to be apart from their families. So many people are in situations like that now. I feel dumb but I didn’t know that Irish Prime Minister Leo Varadkar went back to work as a doctor! He was a general practitioner before becoming a politician and he’s volunteering his services once a week. He’s been doing testing too. That’s so impressive. I wish we had a leader who at least cared about all the people working on the front lines and losing their lives to this virus. As for Matt, he’s redeemed himself a little for me after all his bad MeToo takes. I hope he’s learned from that. His lockdown beard looks terrible though, right? He can’t grow facial hair for sh-t.

Here’s that interview! At about minute 12:45 he talks to a nurse from France named Anais Manierè who is a huge fan.

On the front line – Taoiseach @LeoVaradkar at Morgans Place site in Blachardstown where he he help with #Covid19 testing of residents. This sends out a really positive message 👏🏻👏🏻👏🏻 pic.twitter.com/neqoZ817dZ

Half expecting him to ask me for a euro for the hostel. pic.twitter.com/ykX6EHBFWH 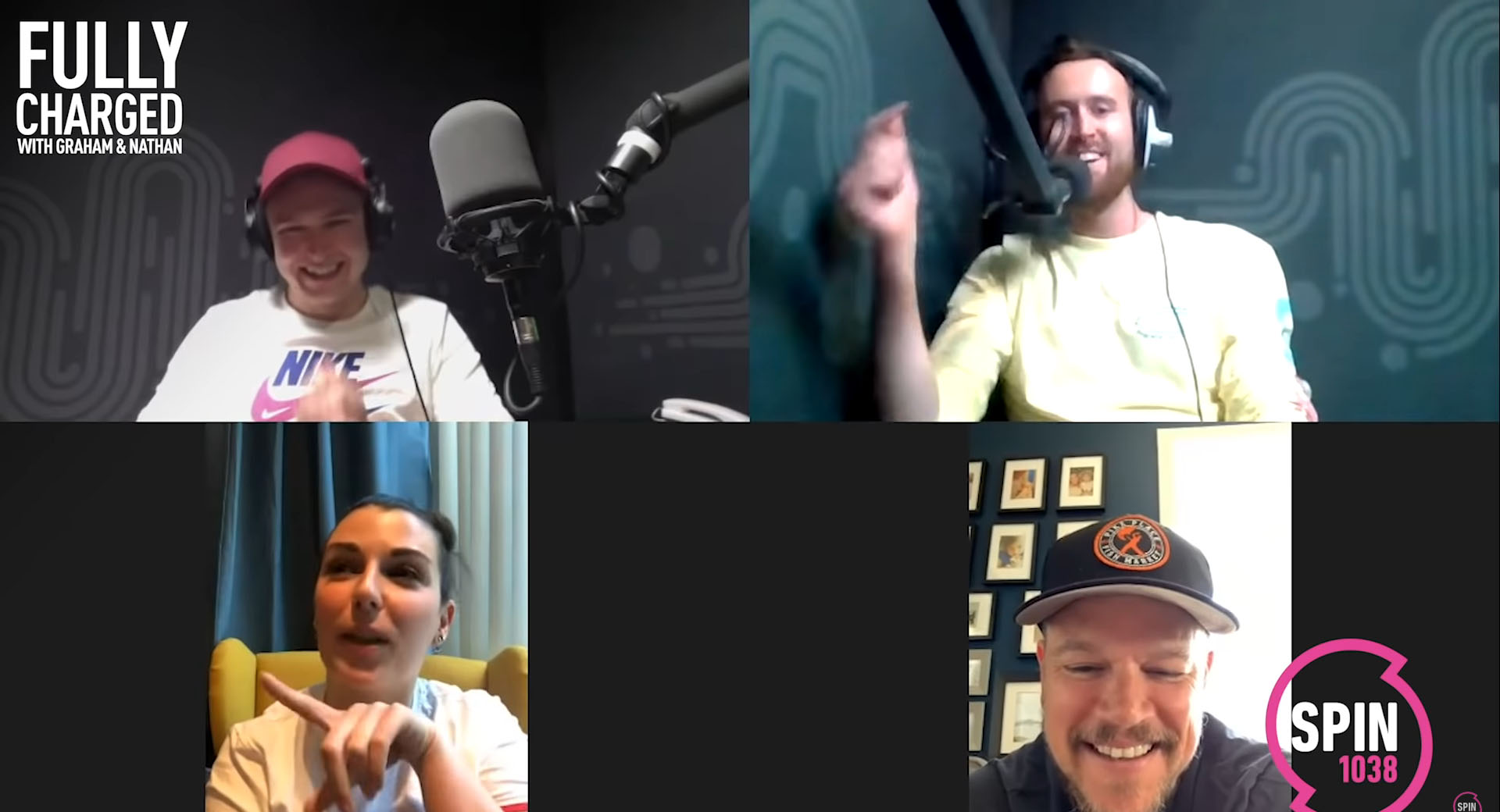 12 Responses to “Matt Damon on spending lockdown in Dalkey, Ireland: ‘It feels like a fairy tale here’”