Julianne Hough: ‘I’m a deep-ass person. There is no right or wrong in my viewpoint’ 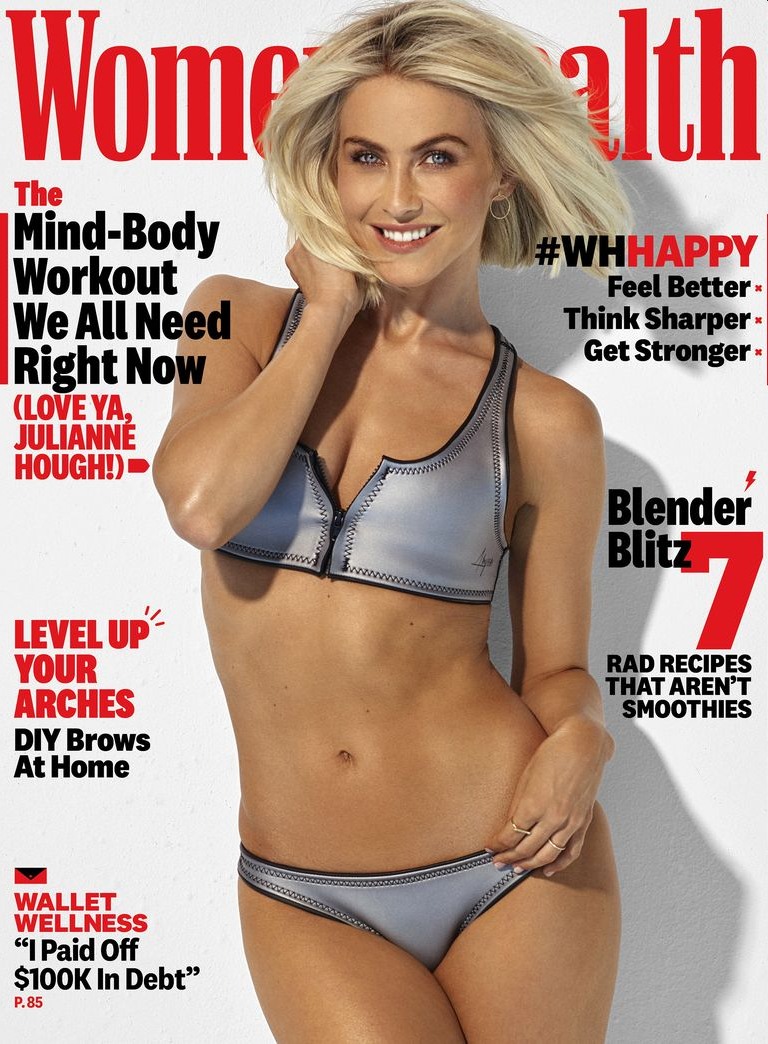 Julianne Hough covers the latest issue of Women’s Health (the American edition). Julianne is going through some well-documented changes – her marriage to Brooks Laich is (as I write this) falling apart, and they’re now formally separated. She’s been seen out with some other dude. She came out as a bisexual last year. And she’s been going all-in on some very Goop-like pseudoscience and everything “holistic.” This interview is basically an extension of all of that, and it made my head hurt. I hope we have some scientists commenting on this post, because I lack the energy to go point by bonkers point here. You can read the full piece here. Some highlights:

Her KINRGY dance workouts built on simple movements. “It’s a blessing to be able to offer [via Internet] what people need most in this world right now, which is to feel certainty that they’re going to be okay, and that they have the power to release all that stress and anxiety and fear. I believe we’re all dancers. We were much more self-expressed when we were kids. I’m trying to help people reconnect back to that inner child.

Her perspective on holistic wellness. “Everything is made up of energy. If you think about the universe, only 4.6 percent of it is matter. So really, we’re all just made up of energy, and if we’re not focusing on our energetic health, we’re missing most of what this universe is. If we don’t move our body to [release] a mental connection, we can never transform the experience we’re holding on to.”

Doing a thing at Davos this year: At Davos, Julianne lay facedown on a table while John Amaral—an energy practitioner whom she credits for much of her new way of thinking—appears to lift an invisible force from her back, causing her to writhe and moan. “Trust me, I got all the comments,” she says good-naturedly, before stating that he was simply removing “stuck” energy from her spine. “Everything that’s energy moves in a wave,” she says, by way of explaining her reaction, which basically looked like she was doing the worm.

She’s not afraid of “exploring alternative practices”: “I’m a deep-ass person. There is no right or wrong in my viewpoint. It is based on what works well for you. If those modalities feel strange to people, it may not be for them—or it may not be for them yet—and I’m okay with that. I believe in helping people trust what’s already within them. The whole mission is to help people connect to their most authentic self.”

Her transformation began a few years ago: She “started unplugging from the societal beliefs and cultural beliefs and religious beliefs that I grew up in.” That included a more fluid understanding of her own sexuality. “I believe in soul love, whatever that looks like. I kind of don’t believe in labels. It doesn’t mean that I won’t have a baby, etc. It just means that I’ve unplugged from what I feel like I should be doing versus what I actually want to be doing.”

Freezing her eggs: “I think the healthier I am from the inside out—as far as my beliefs, my energy, what I’m putting into my body—the better prepared I’ll be when the time comes. We never actually tried to get pregnant. It was more of a precautionary measure: Let’s do our due diligence for the future by freezing eggs.”

Her endrometriosis is affected by “energy”: “I will tell you… through this transformation of really connecting back to my truth, I haven’t had symptoms of endometriosis because of the love and kindness I’m giving to my body. I believe there’s stress, shame, guilt, and suppression of female energy that’s associated with endometriosis, so de-layering that has really helped.”

I missed the Davos thing when it happened. She really did the Worm in front of all of those important people? That’s kind of embarrassing. That part just makes it sound like snake oil and speaking in tongues and some kind of new Pentacostalism. And with Julianne, it’s not just about exploring these “modalities” (Jesus, I hate that word) and trying to figure out what works and what’s fake science, it’s that she’s using her large platform to proselytize all of this, which is something Gwyneth Paltrow does (and Goop is all about “modalities” too). As for her modalities curing her endo… I think there’s a link between exercise, mental health and physical health. She’s taking better care of herself overall and feeling less stress, so her endo isn’t as painful as it once was. It’s not because she did the Worm at Davos.

44 Responses to “Julianne Hough: ‘I’m a deep-ass person. There is no right or wrong in my viewpoint’”