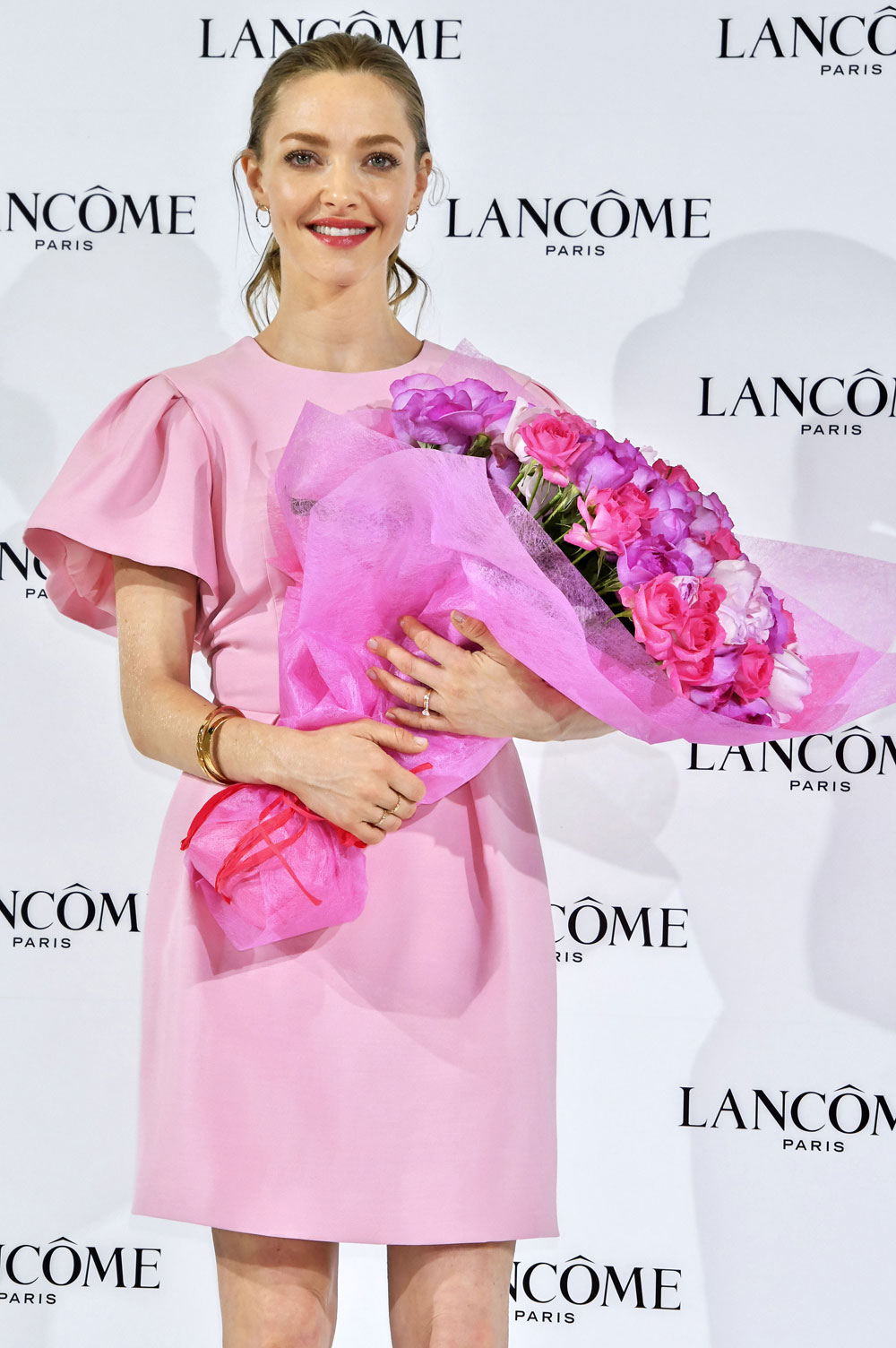 One of the best dresses we saw that a celebrity would have worn to the About Time-themed canceled Met Gala, was on Amanda Seyfried. It was a Little House on the Prairie-looking dress, complete with a vintage floral print, ruffles and contrasting white sleeves, neckline and hem. (That’s below) The thing that made the dress look so pretty and on theme was the setting she chose to show it off. She posed in her chicken coop while holding a chicken she called “Candace.” [sic] Amanda and her husband of three years, Thomas Sadoski, have a little farm in upstate New York, where they live with their three-year-old daughter. Amanda and Thomas have never revealed her name. In a new interview with Access Hollywood to promote the widely-panned Scoob animated movie release (I can’t with these Scooby Doo movies that look nothing like cartoons), Amanda talked about her daughter without saying her name, but she did give the names of some of her chickens. They’re named after celebrities!

Amanda has six hens and one rooster
[One is called Candice Bergen]. There’s a Julia Roberts in there and a Debra Winger.

She loves playing dress up with her daughter and buys matching outfits
We have dress up. We have a lot of dress up stuff. I have Victorian dresses that I buy. My daughter has all her princess gowns and we just play dress up all the time.

On if her daughter will watch this movie
She knows about it we have little toys around. She’s three so it’s the perfect age I think. She’s going to watch it over and over again.

“She’s going to watch it over and over again.” I remember that age so well. It’s sweet that she likes dressing up with her daughter. I would absolutely love that, because dressing up is one of my favorite things to do. (I miss Goodwill shopping so much, but at least my collection is big enough to entertain me at home.) That’s cute that she named her chickens after Hollywood stars! What is the rooster named though? I bet it’s George Clooney.

My friends with chickens tell me they all have unique personalities, so you know that the Julia chicken is a snotty diva who tries to rule everyone and Candice is the fun social chicken who gets along with the rest of the coop. I wonder if it’s super annoying having a rooster. Everyone I know who has chickens has chosen not to keep a rooster because they’re loud. I bet Amanda lives far enough in the country that her rooster doesn’t bother the neighbor’s though. Over the weekend I read this tweet thread from a lady who moved to Nigeria and was dealing with a very loud rooster next door. It’s worth reading for the ending, unless you’re opposed to meat-eating, which I am not.

I did, however, grow up in Savannah GA, so I know anout weird country city shit. Like chickens. In the city. Makin noise.

Now, let's introduce my archnemesis. We'll call him Roo-boy. He is….was….a rooster that lived in the hood apartment block next to our building. pic.twitter.com/wgYVVQSAtL

What I would’ve tried to wear to the Met Gala this year. And my date, Candace. Makeup and styling by @sashalvaoneill #flashback

The Scoob to my Shaggy