Sandra Oh: Asian-Americans ‘recoil if we hear an accent’ on-screen these days 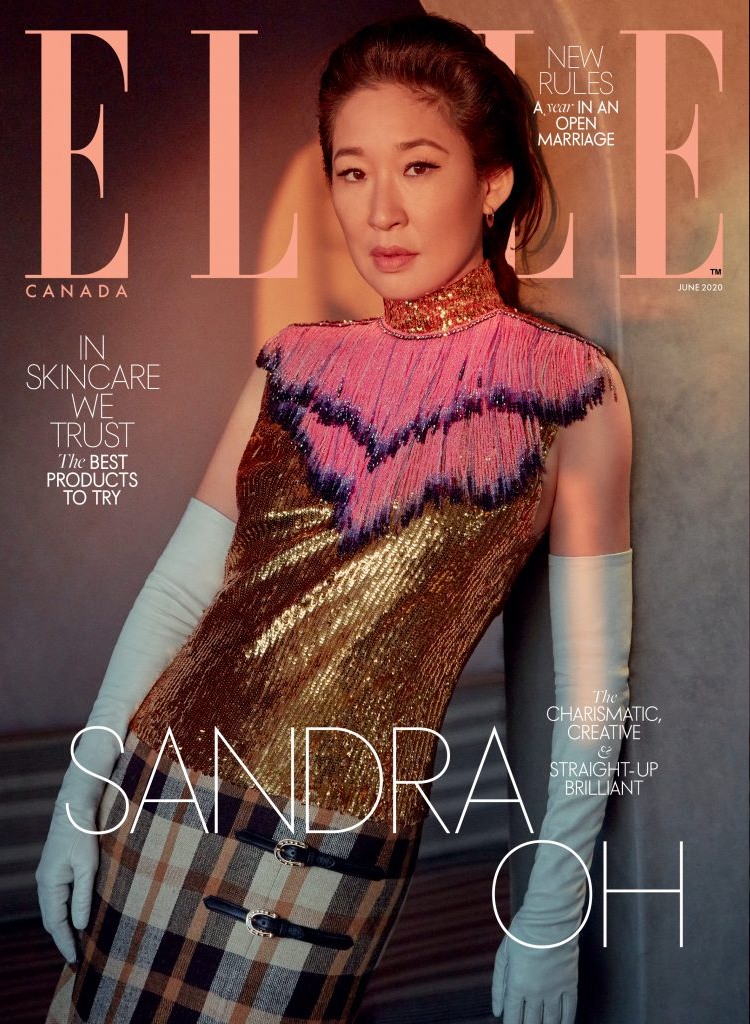 I like Sandra Oh a lot, and I feel like many people out there have a general warmth towards her. She’s not problematic in the least, she’s “the first” Korean-Canadian woman to do almost everything, and she has an earnestness which I really like. But… all of that means that Sandra is not a controversial person, and she’s not falling out of clubs or boning inappropriate men. She’s not a mess. So will anyone be interested in what she has to say about clothes, race, eggs and more? She covers the latest issue of Elle Canada, and I enjoyed this piece. You can read the full interview here. Some highlights:

How she got Grey’s Anatomy: “I decided that I’m only going to play characters that are essential to the plot, that conduct the narrative and therefore can’t be cut out,” she explains. Of course, the crucial step, she adds, “is that you have to get to a place [in your career] where you can say no.”

She prefers eggs to balls: When I ask how she “got the balls” to follow her heart, she quickly corrects me, saying she prefers to say “eggs,” before adding with a laugh and a shrug, “I’ve always had a large set of eggs.”

On the fact that Jodie Comer has a better wardrobe on Killing Eve: “It kills me! I go into wardrobe and see that bitch’s clothing, and I’m just like, ‘Can I get something above Uniqlo? No?’” She’s laughing, but she’s serious about the “huge” importance of fashion on the show. “What are you saying about a character’s mindset when she dresses over-the-top? Eve is always in neutral, basic tones, right? She’s always earthy, in a lot of turtlenecks. The beauty is in how she changes. She changes in fabric. She changes in line, in shape.”

She has an Instagram but barely uses it: “I know I’m supposed to do something with the pictures! But then I’ve left it to the next day, and I think it’s too late…and then a week goes by and it’s even later, and who’s going to care now? I keep missing the window….I am the classic ‘aunt’ who can’t make things work” and then does an imitation: “Honeeeey? Can you make it work? I don’t know what this is.”

On “color blind” casting. “But I’m in a place in my career now where I am specifically interested in roles that explore a character’s race. Because I can—and because I want our conversations to eventually move to a place that recognizes that it’s important. Let’s say it’s a show about a fashion magazine and the editor’s Black. You can’t just write this character without having the background of who she is. But that has been the primary storytelling for as long as we’ve been around… Asian-Americans, particularly from my generation, almost recoil if we hear an accent [onscreen] because of how laden in racism and misunderstanding [it is] and [how it’s a result of] not being in charge of the story.”

I grew up watching movies and TV shows “color blind” casting, where roles were written as default-white, then producers would hire Denzel Washington or Halle Berry or whatever. I think that was an okay transition to what Sandra wants, which is… color-conscious casting? Actually working to tell diverse stories about people of color instead of defaulting constantly to narratives for and by white dudes? It hasn’t been a smooth path, obviously, it often feels like we’re going backwards. As for the accent thing… as I get older, I hate hearing Asian-American actors doing an “accent” too. There are wonderful Japanese-American and Chinese-American and Indian-American actors who get hired to “play up” very crude accents and it’s always the f–king worst.

As for the Instagram… I barely use my Instagram either. I’m just not that generation, and neither is Sandra and it’s fine. Some people over the age of 35 can do it and still seem cool. Some of us don’t want to try. (Also: Sandra is 48 years old, which is INSANE.)

19 Responses to “Sandra Oh: Asian-Americans ‘recoil if we hear an accent’ on-screen these days”