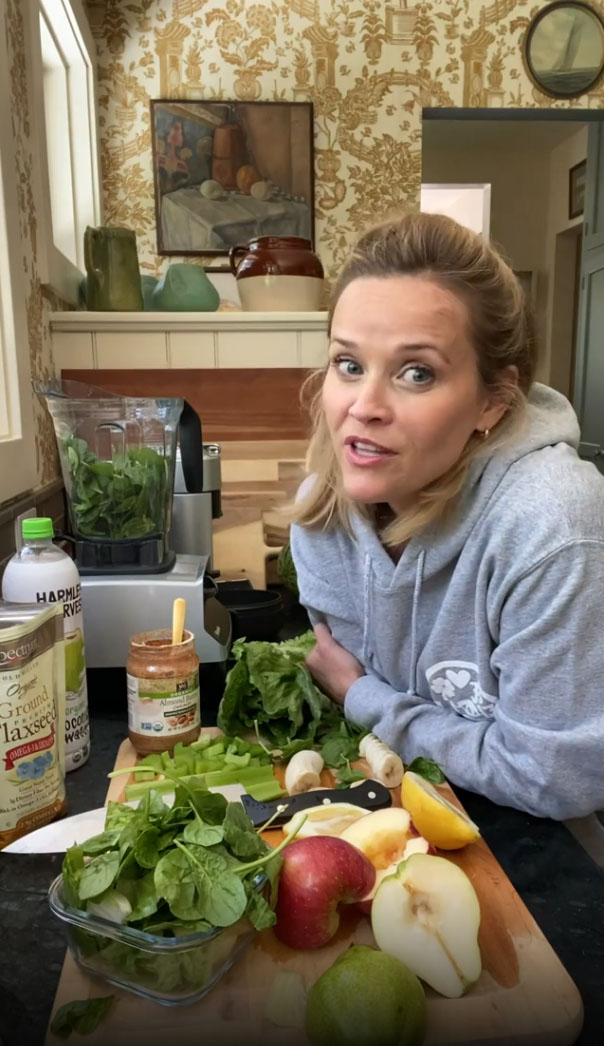 Reese Witherspoon recently shared her smoothie recipe on Instagram and it’s epic! I drink a similar green concoction, I’ll share my ingredients below, but hers is above and beyond. She mixes up two heads of romaine lettuce with an entire peeled lemon, a pear and an apple and drinks it every morning. It’s worth noting that Reese uses a Vitamix, not a juicer, so she’s getting all the fiber from the fruits and vegetables. That’s the same device I use, although I saved a little money by getting mine refurbished. You can get a new Vitamix on Amazon for around $330. I’ve had mine for about 8 years and it’s more than paid for itself. Reese just drinks that giant smoothie as a late breakfast and doesn’t eat again until lunchtime around 1. Here’s what she said.

This is the smoothie I [have had] every day for the past 8 years. I have this instead of breakfast at around 10 or 11 in the morning. Then I’m not hungry until like 1. You need two heads of romaine lettuce. [She chops it up]. A little spinach, celery, anything green [from] the refrigerator. It has to have something sweet so I put in one pear, an apple, a banana and a [peeled] lemon. This makes two portions. I leave it in the fridge and I don’t have to make it tomorrow. 1/2 cup coconut water. [Blend it in the Vitamix]. You can add anything to it, protein powder, almond butter, flax seeds. [Kerry Washington] told me about it [before I really knew her]. I said ‘your skin is so beautiful, what do you do?’ She said ‘I think it’s from this drink.’

Reese’s smoothie is super thick, which is not how I like mine. It also doesn’t sound sweet enough. My smoothie is a bunch of kale, about 1/2 the full bunch I get loose at the grocery store and I don’t take the stems off, about 1/3 cup of some frozen fruit mix including coconut, strawberry and pineapple, 1/2 a banana, a squeeze of some ginger in a tube and a lot of stevia. I’ve made it with romaine before, my mom told me to do that, but I prefer kale because it has more nutrients. I don’t use spinach because it gets wilted too fast and I hate how that tastes. I used to put protein powder in it and that tasted great because it has so much sugar, but I stopped using that. I make it really watery and just fill the water halfway up the blender. Like Reese I make it every other day and save the other half in a vacuum-seal container. Someone once commented that drinking all that kale can give you kidney stones, but knock wood that has not happened to me and I try to drink a lot of water. I drink the shake around 8 and then eat breakfast around 10 though. Maybe I should be fasting longer like Reese does. A lot of you swear by that!

Here’s Reese’s video. She does a goofy dance in the middle. Her wallpaper is kind of chintzy, right?

The secret ingredient is DANCING! 💃🏼 Sharing my morning green smoothie with y’all. Delicious and healthy! 🥒🍋🍌🍎 (Recipe inspired by @_kimberlysnyder)